About Us Sports Journalism Blog 2016 NCAA Men's Basketball Final Four Postcard from Houston: How the Final Four gave me my One Shining Moment

Postcard from Houston: How the Final Four gave me my One Shining Moment

Although the 2016 Final Four in Houston was my first experience as a member of the media during the event, it was not my first encounter at the Final Four. 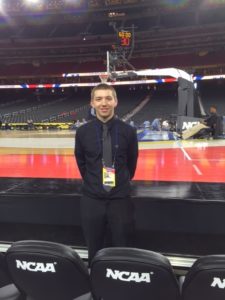 We spent hour upon hour inside the Convention Center doing the various activities — autograph sessions, basketball clinics, basketball trivia, and the chance to see faces that we had only seen on TV.

One highlight was walking by Champps Sports Bar inside Circle Centre Mall and seeing ESPN sportscaster Dick Vitale. My friend Zak, never one to be shy, went inside with me and asked Vitale if he could give us one of his signature catchphrases, “It’s awesome, baby!” Vitale, whose voice was hoarse, likely a result of his trademark yelling, made a point to never disappoint his fans and gave us a raspy version of the phrase we had asked to hear.

It was awesome, baby.

Other parts of the experience weren’t so great.

There was an autograph session for UCLA legend Bill Walton. My friends and I were in line for a basketball game when there was an announcement that Walton would be signing autographs. By the time we finished the game, we headed to the end of a long line for Walton’s signature.

Walton was only signing for a limited time and it became clear that there’s no way he’d be able to sign for everyone within the time he was scheduled to be on stage. It was decided that the line would have to be cut off somewhere. My friends and I didn’t make the cut.

One day during the weekend we went to the Steak ‘n Shake in downtown Indianapolis. My friends and I were scarfing down our burgers and shakes when I looked over and saw a tall older man in an old Boston Celtics hat with salt-and-pepper hair poking out of the side. The man had a few rings on the hand clutching his burger. It was Celtics legend Bill Russell, remembered for his 11 NBA titles and a presence on any short list of greatest players in the history of the game.

As a shy teenager, I didn’t want to bother him or the man he was sitting with. My friend Zak, who didn’t originally believe me that it was Bill Russell, had no reservations and convinced me to walk with him. After all, how many 13-year-old kids were going up to Russell asking for his autograph when his playing career ended 23 years before I was born? He’d appreciate a young kid who was aware of what he’d done throughout his career, right?

We walked over to Russell’s table and my friend explained that we were huge basketball fans and would love to have his autograph.

Russell took a bite of his burger and looked at us without saying a word.

His friend answered our question for us.

“Bill doesn’t do autographs,” he said.

In 2010, when the Final Four took place in Lucas Oil Stadium, I was in a three-on-three basketball tournament that was played in the Convention Center and spent much of my time playing basketball and goofing around with my friends.

In 2015, I was there as part of the volunteer requirements for a sports business class. Instead of being part of the fun and games of the Fan Fest, I was one of the many volunteers there to help the event run so smoothly. My time was spent telling people where exits and bathrooms were while watching hundreds of children having the fun that I had nine years earlier.
This Final Four was different. My time was not spent at the Fan Fest because I am no longer a fan. I was a member of the media, along with Jay Smith, representing the Sports Capital Journalism Program at IUPUI.

I was not spending my time playing basketball and chasing down legends. I spent my time chasing the news and taking in an entirely different experience at the event. I was in the Villanova locker room, trying to figure out how the Wildcats were going to try to limit Oklahoma guard Buddy Hield in a semifinal. I was in the North Carolina locker room after Villanova’s Kris Jenkins hit the buzzer-beating three-pointer to win the national title, listening to devastated players discuss how it felt to lose in such a soul-crushing manner. I was not waiting in line to get Bill Walton’s autograph. I walked past him on the way to my seat in the media section.

One of my best and last images I’ll always remember was on the court as Villanova players and coaches stood on the stage watching the big screens as “One Shining Moment” was played over the arena’s public address system. The song, played every year with a montage of highlights from the tournament, was called by Sports Illustrated, “one of the great power ballads of all-time… One last heartfelt goodbye.”

I knew the music was playing for Villanova, but for a few seconds I felt as though it could’ve been for me.