About Us Sports Journalism Blog 2016 NCAA Men's Basketball Final Four Postcard from Houston: A national champion, polite to the end

Postcard from Houston: A national champion, polite to the end

The voice behind me spoke softly. I was standing on the basketball floor at NRG Stadium, a few feet from the steps that led up to the newly-constructed victory stand for the Villanova Wildcats. From the moment Kris Jenkins launched the shot that won a national championship and inspired a celebration for the ages – the first championship buzzer-beater since Lorenzo Charles’ 1983 dunk for North Carolina State — everything was moving so quickly. Players and coaches embraced. Media members squeezed into small groups to get the first reactions from the national champion Wildcats. Security personnel made sure reporters stayed in restricted areas. The star-shaped confetti made the floor slippery. Camera cables strung along the floor became obstacles. 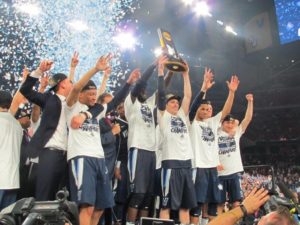 In the middle of all this swirling motion, collisions are inevitable, etiquette is checked at the door, and a video camera in the side of the head can be an occupational hazard. Which is why the words “excuse me” were so unexpected.

There was a hand in the small of my back, not pushing, just directing me gently toward my right. And just as quickly, the person wearing a national championship hat, white T-shirt and dark blue basketball shorts was on his way past me. As the player hurried past, you could see the name on the back of the jersey beneath the T-shirt.

He was hurrying up the steps of the victory stand in time to watch the beginning of a “One Shining Moment” of a lifetime. Ryan Arcidiacono’s four-year journey at Villanova had ended with the pass that created the shot. He had heard Jenkins screaming – “Arch, Arch, Arch” – and had delivered the most important assist in Villanova basketball history. Soon the image on the video boards, a championship trophy being held over Arcidiacono’s head, would last a lifetime.