Postcard from Houston: A changing industry, an uncomfortable coach

I went to the Final Four, and a journalism class broke out.

The interview room at NRG Stadium was probably the last place to expect a discussion of journalism ethics and practices late on a Saturday night. But there it was as Roy Williams, the North Carolina basketball coach, met with the media after his team’s convincing national semifinal victory over Syracuse. 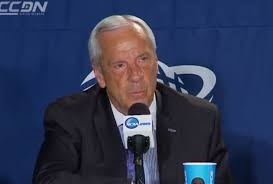 Suddenly, a combustible mix included a revered institution facing the potential disgrace of NCAA sanctions, a basketball team enduring the scrutiny of the highest-profile challenges, and a description of a fragmented industry. Williams was voicing his frustration about a business that once seemed more accountable, more interested in information and insight than the analytics of attracting a digital audience, with people and institutions that were more easily identifiable.

The context had begun to develop as Williams waited off stage during the Syracuse press conference, when Jim Boeheim, whose team’s remarkable tournament run had just ended abruptly, was asked if he will consider retiring.

“Why do you guys always ask me that, really?” Boeheim said. “Did you ask Roy that?”

“Because you had a rough season,” the reporter said.

“Make sure you ask Roy when he comes in, too,” Boeheim said, before he answered that he was not considering retiring.

Five questions into his session, Williams listened to a question from John McCann, a familiar face from the Durham Herald-Sun:

“We love to second guess the coach, whether it’s put Marcus Paige back on the ball or take Kennedy (Meeks) out of the starting lineup. You stuck to your guns. For Kennedy to have the success he had tonight, how much of that during the season was total confidence in your guys, versus a coach hoping that his guys would get it together?”

Williams’ response had to do with much more than a coach’s confidence in his players.

Williams made a point of saying he appreciated the way the question was presented. But the smile that had been on his face was gone, and he was challenging an interview room late at night: “Do you know how many practices we’ve had? Ninety eight practices….How many of you guys came to any of our practices?”

He looked out at his audience. He found one. Then another. That was it.

“I mean, you think about that,” Williams said. “I would never criticize somebody about something that they know a heck of a lot more about.”

One day earlier, in a conference room in an adjacent building, nearly 60 students from high school to a graduate student who said she was “pushing 60” attended a seminar organized by the United States Basketball Writers Association and the Sports Capital Journalism Program at IUPUI. During a panel discussion, Dana O’Neil of ESPN.com described the importance of attending practice even if it was not essential to the story.

O’Neil’s point was that if you are offered an opportunity to watch practice and learn something more about your subject, you do it even if you would much rather get a head start on having dinner. It is all part of a process of developing a sense of curiosity, gaining credibility and earning trust in a business that has made those challenges increasingly difficult. I began to think of the things I had learned by going to practice and having the conversations that would not have happened otherwise. One of the most educational spots happened to be Chapel Hill, North Carolina when Williams was an assistant on Dean Smith’s staff.

This is how it worked: You would make your request to Linda Woods, the assistant in the basketball office. You would receive instructions on when to arrive at Carmichael Auditorium, where you would receive a blue index card to identify you as a visitor and a minute-by-minute practice plan from the desk of Dean Smith. What would follow was a period in a classroom with large moving parts.

As long as you sat quietly above the aisle more than halfway up in the stands, you were welcome. This was in the days before each prospective recruit’s whims were fodder for the recruiting gurus, so the new players were not nearly as familiar to outsiders as they would eventually become. In December, 1981, when the No. 1-ranked Tar Heels were scheduled to play in Madison Square Garden and I was working for The New York Times, I was working on a story about a Carolina team dealing with high expectations.

I kept watching this one player, a freshman. I was not familiar with his name. My attention kept coming back to him, not because of anything spectacular that was happening in the day’s routine drills, but because of his fluidity, his effortlessness and his economy of motion.

I reached for the media guide and looked at the roster.

Jordan. Michael Jordan. I’ll have to remember to follow this kid.

The connections made before and after practice could provide opportunities to address misunderstandings before they would reach a crisis point. In 2005, when the Tar Heels defeated North Carolina State on the way to a national championship, Rashad McCants made a throat-slash gesture that was captured on television and criticized by commentator Len Elmore. Williams addressed the issue during a post-game press conference, went into the dressing room, and instructed McCants to do the same.

The problem was that an edition’s deadline at USA Today had passed after Williams’ comments but just before McCants spoke, so the story did not have the player’s explanation that he was making a gesture to a friend in the stands. The next day, I called Steve Kirschner, the senior associate athletic director for communications, to confirm an appointment to interview Williams later that day.

Kirschner confirmed the appointment but said that Williams was not happy after reading a story that he felt omitted McCants’ comments. So a few hours later, as we sat in the first row of seats at the Smith Center, I described the realities of deadlines, the fact that McCants’ comments were included the next edition, and there was an understanding of how and why things had happened.

Perhaps it is the absence of communication in the modern communications industry that Williams finds alarming. There has always been a gulf between subject and reporter, but these days it feels more like a chasm.

Williams was asked to expand on his feelings at the Sunday afternoon press conference leading to the championship game against Villanova.

“…one of the things that bothers me nowadays is that so many people are media that can put things out that had no journalism background,” Williams said. “….I mean, most of you guys, you went to school in journalism. There were principles. Now people put things out that could be perceived as media that really is not, that doesn’t understand any of that. It’s the more outlandish thing. I think that’s been harmful….

“Nowadays, there’s people that say, ‘So-and-so, so-and-so dot com, hyperspace, Google data, Yahoo. I don’t know what the hell you’re talking about. To me that is a big change. I think if I were you, I would feel really proud of what you’re doing, worry about what else is being done.”