Postcard from Dallas: Howdy from the Big City 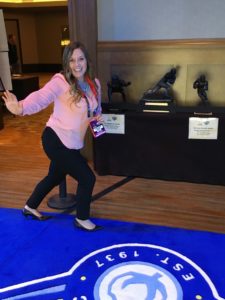 Jessica Wimsatt poses with the Heisman Trophy at the Goodyear Cotton Bowl Classic in Dallas.

We’ve all heard the description, a three-letter word that is meant to epitomize everything in the state of Texas.

And at the heart of the state, there’s Dallas, hub of all things larger than life.

When I first heard the news that I would have the big opportunity to travel to Dallas to cover the College Football Playoff Semifinal on New Year’s Eve, it was only fitting that a big smile swept across my face.

I packed heavily—two big suitcases that would become a laughing point of the week—and arrived in the big city just two days after Christmas.

Within the first 24 hours, I knew the description was correct.

We checked into the Omni Dallas Hotel and were greeted with an assortment of big-time features like fancy hotel bathrobes and an electronic bathroom mirror that featured a television screen embedded in its center, things a small-town Indiana girl is certainly not accustomed to.

We headed downstairs to collect big packets of statistics, notes, team media guides, conference media guides, schedules and rosters. The next morning, we got our first taste of reporting on the big event with coach and player interviews with Michigan State’s offense and Alabama’s defense — yes, you guessed it, some of the biggest humans I’ve ever laid eyes on.

The most Texas-sized moment of the week came the next day, at sunrise, the first time I walked into AT&T Stadium in Arlington. We must have felt the same way that the fictional basketball players from Hickory High felt entering Butler Fieldhouse for the state championship in the movie “Hoosiers.”

I immediately knew the pictures didn’t do this place justice. The video board alone looked bigger than the house I grew up in. Walking onto that turf for the first time, I couldn’t help but just stare at everything, amazed at the Texas-sized building around me.

I was convinced that ‘big’ really did describe everything in Texas.

But in a week where everything seems so big, I’ve found the moments that I’ve enjoyed the most are the little ones — the small observations that you can only experience once you’re truly immersed in an event like this one.

Our first day here, we sat down to breakfast. We had a spare seat at our media table, until someone came and asked if they could sit there. I looked up to see that my new breakfast mate was Yahoo Sports reporter Pat Forde, who I later discovered was on my flight to Dallas from Louisville.

My encounter with Pat — who followed me on Twitter the next day (score!) — was just the first little thing of the week that I’ll remember as a big thing when I look back on my trip to Dallas.

That same day, I watched as Alabama players Reggie Ragland and A’Shawn Robinson joked around with each other in a press conference, showing that even with the big implications at stake this week, these college kids were still just having fun and living their dreams.

While the Alabama players seemed familiar with the spotlight, one of my favorite experiences of the week was seeing the reactions of some of the Michigan State players, who unlike Alabama, enter the game on Thursday as underdogs who haven’t been in this semifinal scenario.

After their press conference on our first day here, I watched as the players collected their belongings from the podium and headed out of the media room. Fifth-year senior Jack Allen lingered behind, and at the encouragement of the moderator, decisively collected an assortment of Cotton Bowl pins, cups, and other memorabilia available on the podium. He was truly living in the moment, one that he and his teammates hadn’t experienced.

From striking my own Heisman pose with the Heisman trophy to dumping pieces of AT&T Stadium turf out of the soles of my shoes, Dallas was filled with little moments like these. Little moments that felt like something bigger.

When I look back on my opportunity to cover the College Football Playoff Semifinal, there’s no question I’ll remember how big everything was, but this week has taught me more than just statistics and writing on deadline.

I’ve learned that even in the big moments, it’s important to stop and take it all in, even the little things. When I remember my big-city experience in Dallas, I’ll remember enjoying every single moment, no matter if they were Texas-sized or not.