Postcard from Chicago: Taking the time to learn, reflect, improve and (occasionally) eat

With two days gone and two to go, my experience at the 2016 Midwest Regional in Chicago has been surreal. There has been no shortage of really cool moments:  bumping into Reggie Miller outside of the Virginia dressing room, taking in the United Center under the bright lights before the first game at court level, inhaling the Chicken Vesuvio at Harry Caray’s Italian Steakhouse. But the moments currently sticking out most prominently in my mind are the less glamorous ones. 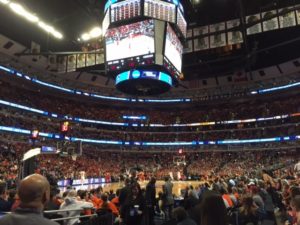 The United Center during the Virgina-Iowa State Midwest semifinal

Stumbling across an interesting story line on day one only to realize it’s too late to get an essential quote. Hustling into the Iowa State locker room late in the media availability period after the team’s season-ending loss to Virginia and finding a roomful of angry eyes flashing towards the only reporter still in there. I shuffled out of there quicker than Matt Thomas can release a jump shot.

Now, as my stomach grumbles, I’m thinking about the two hours I spent before Friday’s semifinal games. Hours I spent getting lost in tasks like writing a prediction and looking up stats while forgetting that the media buffet was about to close. It’s sort of like an athlete who always feels the stings of past losses more than he or she ever enjoys the big wins. But this is how life tends to work in general, and I’m sure it’s designed that way.

It’s good to make mistakes. It’s good to lose. It gives you the chance to learn and improve, which after all is the whole point of this trip. In the end though, the most important lesson is as it always has been:  remember to eat.