About Us Sports Journalism Blog 2017 NCAA Men's Basketball Final Four Postcard from Arizona: Reclaiming a dream on a championship night

Postcard from Arizona: Reclaiming a dream on a championship night 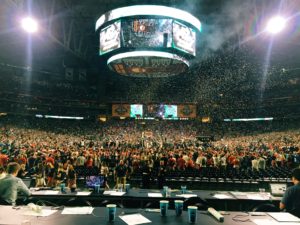 My first sports story was to cover a girls’ softball game at William Blount High School in Maryville, Tenn.

It was cold day in early Spring. The sky was overcast and gray with a constant threat of rain. I paid to get in, not knowing any better, and I sat on the top row of cold, metal bleachers. William Blount’s pitcher, a muscular, blonde-haired girl, was dominant that day and shut down the opposing batters. Her coach was a short woman with brown hair and a glowing smile. I knew very little about the technical side of softball, and it showed in my questions.

“Are you afraid of wearing down your pitcher’s arm early in the season?”

“That’s not really an issue in softball,” she said.

The crowd of friends and parents hung around the field after the game to wait for the players to clean the dugout and rake the infield. The kids talked about homework and who was going to Taco Bell. I left to go write my story.

Now, I find myself on a flight back to Indianapolis from Phoenix. I returned to the hotel Tuesday morning from the national championship game at the University of Phoenix Stadium at almost 2:00 a.m. I had watched North Carolina gut out a win over Gonzaga for its sixth national title in school history. I saw the Gonzaga players, who reached the Final Four for the first time in school history, sit in stunned silence in their locker room, unable to grasp what happened. I sat near the baseline at the south end of the stadium, near the center of a crowd of more than 77,000 people.

I will look back on this weekend as a watershed moment in my life. Not just in my professional career, but in my life. I kept telling my professor, Malcolm Moran, “I feel like I’m going to have a Lou Gehrig moment and tell you I’m the luckiest man on the face of the Earth.”

Sitting at the press tables moments before tipoff on Monday night, I turned to him.

“Do you remember when I came to your office in November?” I asked.

I visited him after years of believing my dream to be a sports writer was gone. I sat in his office on a complete leap of faith, not sure what would come of my meeting with him. I was a 32-year-old married father of two, living in a different state. Coming to school at IUPUI was about as realistic as getting a Sunday ticket to the Master’s.

Yes, he remembered. Five months later, I was sitting feet away from the court at the Final Four, press credential around my neck, rubbing elbows with Pat Forde, David Teel, Dana O’Neil, Jeff Goodman and others whose work I had admired from a distance. I was about to have access to the post-game locker room and ask questions to the players who, at that moment, were at the center of the American sports world.

I had gone from that softball game at William Blount High School to one of the biggest events in American sports.

I said thank you.

We both turned to watch the game.

It was his 37th championship game, and my first.