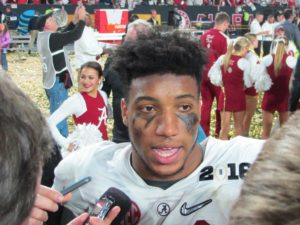 In that moment, Saban turned to the most unlikely of players to help provide that jolt: Junior place kicker Adam Griffith.

What came next was an onside kick that will forever have its place in the long and prestigious history of Alabama football for the ensuing excellence it inspired.

“We were tired on defense and weren’t doing a good job of getting them stopped,” said Saban. “I felt like if we didn’t do something or take a chance to change the momentum of the game that we wouldn’t have a chance to win.”

Freshman Marlon Humphrey, whose father Bobby holds his own place in Alabama history, made the shocking recovery of the onside kick that created another Alabama possession. The Tide would score 17 points within a span of 3:03, the stretch that led to a 45-40 victory over No. 1 and previously undefeated Clemson at University of Phoenix Stadium Monday night.

“It got the sideline energized,” said junior tight end O.J Howard, the Offensive Player of the Game, whose five catches for 208 yards included touchdowns of 53 and 51 yards. “Everybody was pumped up and we went down and scored on the next drive, so it was a big momentum swing for us.”

The championship is the 16th claimed by Alabama, the tenth in the final poll of the Associated Press, and the fourth in the past seven seasons. Alabama’s victory ended Clemson’s 17-game winning streak. 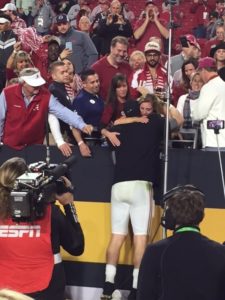 Alabama quarterback Jake Coker celebrates after the victory over Clemson.

“It was a big challenge for us,” said Saban. “I am so proud of our players, the way they competed, especially in the second half.”

It was the fifth championship won by Saban, including one at Louisiana State University. Legendary Alabama coach Paul (Bear) Bryant, whose teams were credited with six championships, is the other coach to win more than Saban’s teams.

As Griffith approached the Alabama sideline after his 33-yard field goal tied the game at 24-24, he became excited as soon as he learned that Saban had called the onside kick. It was made necessary by the brilliance of Watson, who completed 30 of 47 passes for 405 yards and four touchdowns, and rushed for 73 more.

“Coach Saban called the play and I had to focus on getting ready,” said Griffith. “We practice that once a week. I was real confident in it and it was one of the best ones, that’s for sure.”

Alabama special teams coach Bobby Williams recalled having a talk with Saban at halftime that led to the decision to go through with the onside kick.

“Every time we kickoff we have a discussion,” said Williams. “When we came back from halftime we said, ‘Hey, we’re going to have to take advantage of how they’re lining up,’ It was a really great idea.”

With the grace of a European soccer player, Griffith was able to perfectly loft the ball to the right, ten yards downfield and directly into the path of Humphrey. Between the accuracy of the kick and the fact that Clemson never saw it coming, Humphrey was not touched on the play.

“When I saw the ball in the air, I knew that all I had to do was catch it,” said Humphrey. “It certainly changed the game.” 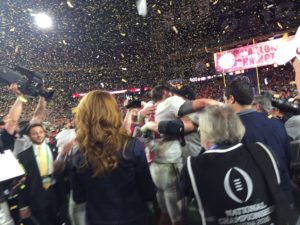 It took Alabama only two plays for their renewed sense of energy to display itself on offense. Quarterback Jake Coker hit Howard in stride down the center of the field for a 51-yard touchdown pass for a 31-24 lead with 9:45 to go.

“The second one was just the exact same play from last week against Michigan State,” said Howard. “This time I took the middle of the field, nobody was in the middle and it was wide open.”

Heisman Trophy winner Derrick Henry had 36 carries for 158 yards, the most by a Heisman winner in a National Championship game victory. Henry scored three touchdowns. He became the 15th Heisman winner to win a title in the same season he won the award. Henry is the fifth running back to achieve that feat, joining Alabama’s Mark Ingram in 2009, Pittsburgh’s Tony Dorsett in 1976, Army’s Doc Blanchard in 1945 and Minnesota’s Bruce Smith in 1941.

A 31-yard field goal by Clemson kicker Greg Huegel cut the Alabama lead to 31-27. But then senior Kenyan Drake added the exclamation point to Alabama’s game-winning sequence by returning the kickoff for 95-yard touchdown, the longest play of the Tide season, to increase the Alabama lead to 38-27 with 7:31 to play. 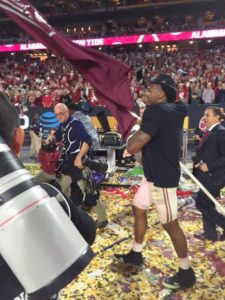 Alabama running back Derrick Henry carries a school flag after the victory over Clemson.

“I saw a hole and I took it,” said Drake. “I finally got one this season….Doing that in my last game of the season was special. I couldn’t be happier.”

Coker felt the shift of momentum at a critical time. “That sequence probably won us the game,” said Coker. “It flipped the total complexion of the game and gave us the confidence we needed to come out on top.”

For Saban, the decision was a necessary, calculated risk. “If we want to try that,” he said, “we think we have a good chance because of the spacing on the field that’s available to us. So it worked.”

He looked at the questioner and offered one last thought. “But let me say this,” Saban said. “You don’t look like the type that would do it to me, but if we wouldn’t have got that, y’all would be killing me now.”