Once an obscure event, the NFL scouting combine entertains the masses 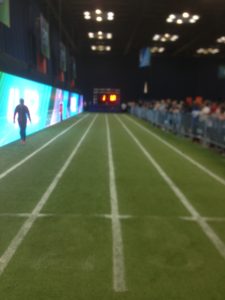 Fans were able to race a video of Demaryius Thomas of the Denver Broncos in a 40-yard dash.

INDIANAPOLIS – The athletes were not the only ones that were tested at the National Football League scouting combine.

One more indicator of the ever-increasing interest in the combine was the presence of a free interactive fan experience called the NFL Combine Experience this year. The fan experience space was located in an enormous room within the Indiana Convention Center.

The league provides similar interactive-fan events at the Super Bowl and draft, but this is the first time an experience was held in conjunction with the scouting combine. The NFL Combine Experience was a total-football carnival complete with games, lines and concessions stands.

The event allowed fans to participate in many of the drills the actual prospects go through during the combine. Big and small, adults and kids alike could test themselves physically at the vertical jump, broad jump and cone drill stations. And in the most popular attraction, fans could find out 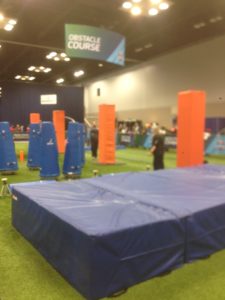 how long it takes them to run 40 yards. The 40-yard dash station features a 40-yard long video board that lets fans race against a virtual Demaryius Thomas, the wide receiver from the Denver Broncos.

The event did not give fans the chance to attempt a 225-pound bench press, but it did let them watch the actual prospects during their bench-press sessions. The lifting area was set up near two sets of elevated stands. One seating section was designated for actual NFL scouts and evaluators. The other was open to fans.

One NFL representative told a group of fans waiting to be seated that cheering is “highly encouraged.”

And that’s not all. The experience also housed exhibits where fans could be photographed with the Vince Lombardi Trophy or with No. 1 jerseys on an NFL Draft replica stage. Super Bowl rings were on display. In one corner, attendees could play Madden 17 on Xbox. In another, fans could get autographs from players such as Ryan Kelly and Anthony Castonzo of the Indianapolis Colts.

And of course there was a gift shop where NFL-licensed shirts, jerseys and hats could be purchased. You could even buy an official 2017 NFL scouting combine t-shirt.

People heard “football” and “free” and they came running.

“I’m a big football fan. I’m a Dallas Cowboys fan,” Javier Herrera said while wearing his No. 21 Ezekiel Elliott jersey. “And whenever there’s an event like this, I always bring my family.”

Herrera lives in Indianapolis but grew up in Texas where the Cowboys are king. He was later spotted being photographed by his wife as he pretended to tackle a Philadelphia Eagles statue.

Sunday was the third day Danny McMahon came to the Convention Center.

“It’s fun to try and do all the drills,” McMahon said while sporting a throwback No. 7 Bills Doug Flutie jersey. McMahon “sadly” inherited his Buffalo fandom from his father who grew up in western New York. “The day before yesterday we watched a bunch of bench press,” he said. “It was cool to see the future guys and how strong they are.”

The league hasn’t released information regarding how many people entered the experience from Thursday through Sunday, but lines for the drill stations were long over the weekend – yet another gauge of the fans’ insatiable appetite for anything NFL related.

It’s now hard to believe, but years ago the NFL combine was barely on anyone’s radar. The event was an obscure, mysterious one, closed to the media and covered by only a handful of reporters. Now it’s a full-blown televised spectacular, complete with constant media scrutiny and an actual circus on the side.

All of this for a bunch of guys running 40 yards in shorts. There may be no greater testament to the ever-expanding influence of the NFL.