Moment to moment, Michigan State seeks a chance for a championship 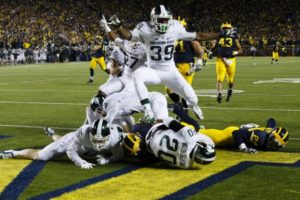 DALLAS – The day before the greatest challenge of his coaching career, the College Football Playoff Semifinal against Alabama, Michigan State coach Mark Dantonio delivered a carefully crafted message. “This will be a great opportunity,” he said, “but a great challenge for us as a program. And we’re looking forward to our moment.”

Before the Goodyear Cotton Bowl Classic, a game that would raise the stakes in a Spartan season that has already held a series of unforgettable moments, Dantonio took ownership and claimed this one as their own. If Michigan State can advance to the College Football Playoff Championship in Glendale, Arizona, against Clemson or Oklahoma, the achievement would represent something the Spartans have been working for all year, but it is far more than that.

Michigan State’s autumn was defined not by the controversial, last-second loss at Nebraska. In East Lansing, Michigan, it has become remembered for Jalen Watts-Jackson’s shocking return of a fumbled punt to beat Michigan, the last-second victory at Ohio State with Tyler O’Connor starting in place of the injured Connor Cook at quarterback, and the for-the-ages, 22-play, game-winning touchdown drive to beat Iowa in the Big Ten championship game. The moment Dantonio defined in the final pre-game press conference Wednesday morning is something Michigan State football has been working towards since the coach arrived in 2007, when the Spartans began to create the foundation of consistent success.

There was the first Big Ten championship of the Dantonio era, the cathartic 2013 victory over No. 2 Ohio State. The victory over Stanford in the 100th Rose Bowl — Michigan State’s first since 1988 — and the emergence of Cook and a young nucleus, including fifth-year senior center Jack Allen and fifth-year senior linebacker Darien Harris, who grew into leadership roles. 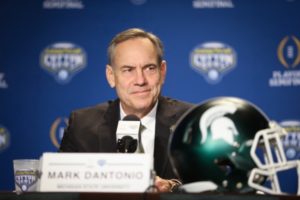 “What I think is most important if your seniors have their best senior year that they’ve had, great things are possible,” Dantonio said.

The Spartans were up against No. 5 Iowa. A conservative, low-scoring game changed suddenly when an 85-yard touchdown pass from Iowa’s C.J. Beathard to Tevaun Smith on the first play of the fourth quarter gave the Hawkeyes a 13-9 lead.

Michigan State would depend on an offensive line that has had six different starting lineups this season. Three Spartan starters – Allen, left tackle Jack Conklin and right tackle Kodi Kieler, had missed at least two games because of injury. Four of the Spartan starters have started at multiple positions this season.

With 9:31 to play and the Michigan State season about to be defined, the Spartans started out. The drive included 17 rushes for 59 yards, and three completed passes in five attempts for 33 yards. The final 12 plays of the drive were runs. Five times, the Spartans extended the drive on a third-down play, and once, on fourth down, Cook’s 2-yard run gave Michigan State its chance.

From the 3-yard line, they hand it off again to LJ Scott. Two failed attempts and the clock is winding down. It’s third and goal with 33 seconds remaining. Scott gets the ball again, this time running to the right side.

Left guard Brian Allen, after carrying out his assignment, chose not to look. “I just kept my head down,” Allen recalled, “…and said, ‘I’m going to wait and listen to the crowd.’ Iowa had probably 75 percent of the stadium. And at first I heard a big roar and I’m thinking in my head, damn, he didn’t get in. Then I heard them silenced and I looked up and touchdown. I didn’t see the play until afterwards, but it looked like he was stopped on the 3-yard line. He kept his legs moving, and kept driving, and found a way to get in.”

Scott’s 1-yard touchdown, with 27 seconds to play, gave him a total of 40 yards on 14 carries. The stretch of 9:04 led to a presentation on a victory stand, where Cook decided that his most valuable player award would be hand delivered to the people in front that fought through their exhaustion to make all things possible.

“I didn’t really think about it until the end, but there were two TV timeouts during that time,” Allen said. “I think there were three timeouts, four timeouts throughout the drive. Without those, I don’t know if I’m going 22 plays,” Allen said. “It’s pretty tiring. But with the timeouts, you can come off and breathe….I would come off the field, I would take my helmet off and catch my breath, catch my bearings. We looked at LJ. He’s got the visor on. Usually it’s clear, looking pretty… You focus in on that in the last drive, and he’s got spit and water all over it. It’s foggy. Looking good.”

The Spartans had won with their style, on their terms, to produce their moment. One moment that leads to another.

“This is the next step for Michigan State,” Conklin said. “We’ve won a Rose Bowl. We’ve won a Cotton Bowl. We want that national championship.”