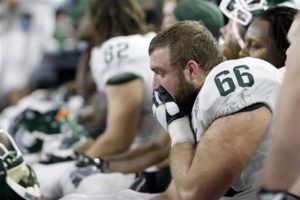 ARLINGTON, Texas – They thought they knew the challenge they were facing. The Michigan State Spartans examined the strengths of the Alabama Crimson Tide, searched for any weaknesses and planned to rely on their senior leadership to find a way to reach the College Football Playoff National Championship.

“Leading up to the game,” said Michigan State senior quarterback Connor Cook, “you watch the film and the way their defensive line played, the way their linebackers filled gaps, the way their secondary made plays in the pass game in the back end. Everyone was aware how good of a defense they were.”

When the Spartans left the field at AT&T Stadium late Thursday night, they had been stifled by a potential national champion. Alabama issued an emphatic reminder of why it leads the nation in rushing defense, holding opponents to 69.7 yards before its remarkable success against the Spartans in the 38-0 victory in the Goodyear Cotton Bowl Classic. Michigan State’s net rushing yardage in the first half was minus-9. The total for the game was 29, on 26 carries. Spartan coach Mark Dantonio thought of the numbers and shook his head.

With Michigan State’s rushing game at a standstill, Cook’s challenge became that much more difficult. He completed 19 of 39 passes for 210 yards. He had averaged 243.4 yards per game with a season percentage of 57.8 percent.

“They play extremely well on the defensive side of the ball,” Dantonio said of the Crimson Tide defense. “They stay fresh. They have good guys covering, good technique….Linebackers are downhill. So it was difficult to run the football. And when you become one dimensional… It’s very difficult to win a football game like that.”

It became more than a struggle to make plays on offense. The Spartan defense could not handle Alabama’s underrated passing game. Alabama’s Heisman winner, running back Derrick Henry, was a focal point of the Spartan defense, which held the junior to 75 yards. But with Crimson Tide quarterback Jake Coker taking control of the game, Michigan State did not have a response.

“It’s a Catch-22 situation,” Dantonio said. “They’ve got a Heisman Trophy winner in the back running the football, a 245-pound guy they give the ball to him 40 times a game. You’ve got run-pass conflicts. If they’re going to drag the ball to him and then play action it, the No. 2 receiver is not going to get rerouted sometimes. He’s going to come up the field….And if you want to play three deep or if you want to factor in and play him and double him up and all different things, you’re going to allow them to run the football as well.”

As Alabama’s dominance became clear in the second half, Michigan State’s hopes began to vanish.

“I think they have a versatile offense where they’re not only able to score with their back but they do a great job of getting their receivers out and putting them in situations where they can make plays,” said Spartans senior defensive end Shilique Calhoun. “They do a good job of finding weak spots and capitalizing on those moments.”

Cook took responsibility for the game’s turning point, the interception by Alabama cornerback Cyrus Jones near the goal line that ended a Michigan State drive that could have brought the Spartans to within 3 points before halftime. “Either touchdown or incomplete,” Cook said. “I just let it slide. Threw it short, obviously. Bad ball. Completely my fault.”

The offensive line blamed itself for giving up four sacks and not being able to establish a consistent running game.

“We didn’t run the ball like we wanted to,” said junior left tackle Jack Conklin. “A couple things we wanted to do we didn’t do as well as we should, and it comes down to focus on our side and comes down to the offensive line. We were getting so many three and outs there in the second half, our defense is going to get tired and it’s on us… We don’t usually turn the ball over. We almost always win the turnover margin and we came out and didn’t win that and didn’t win the game so we couldn’t do things like that.

“We couldn’t run the ball. We pride ourselves on lining up and smash mouth and play football and we just didn’t get it going. I mean we’d have a little something here and there and then something would happen and we’d just shoot ourselves in the foot… It was just little things we did that hurt ourselves.”