ARLINGTON, Texas – They had not envisioned an exit quite like this. The Michigan State Spartans slowly, silently made their way to the locker room at AT&T Stadium. A night that had begun with the possibility of passing through a threshold and heading toward the College Football Playoff National Championship ended with the Spartans quietly leaving someone else’s party.

Soon after the 38-0 loss to Alabama in the 80th annual Goodyear Cotton Bowl Classic, many of the Spartans had their helmets on to try and hide their tears. Others looked angry, their faces all red, as they tried to hold back their emotions. Jack Allen, the fifth-year senior center and team leader, was visibly upset. His eyes were puffy, his face was flushed and his cheeks still glistened from his tears. He was going to miss more than Spartan football. He was going to miss his family.

“It means everything to me,” Allen said later in a quiet dressing room. “A lot of people come to school and make friends and stuff like that, but you show up on your first day as a freshman and you make 105 new friends right away. These guys are my family and it will be hard to walk away from them, but sometimes you have to.” 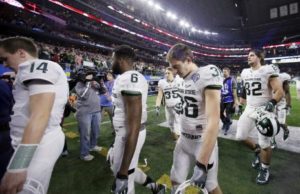 Michigan State players leave the field after the Cotton Bowl loss to Alabama on Dec. 31, in Arlington, Texas. Alabama won 38-0 to advance to the championship game. (AP Photo | Tony Gutierrez)

Players hugged and consoled one another in the locker room. The end of the season had come. It was not easy to let go.

At the end of a 12-2 season, the senior class left as the winningest in the history of the program, with a record of 43-11 including three bowl victories. By the end of the evening, the Spartan seniors had to remind themselves of all their past success. For them, this was their last game as Spartans. For some of the seniors, this would be the last football game of their lives.

Michigan State was shut out for the first time since a 14-0 loss to Michigan in October, 2000, a span of 195 games. The 38-point margin was the second highest in Spartans bowl history.

Despite the loss, many of the seniors look back at this season as a success. Throughout their careers, they had heard coach Mark Dantonio emphasize the importance of maintaining perspective. That emphasis became more important on their frustrating New Year’s Eve.

“Looking back, we’ve been so fortunate to play in so many big-time games, to win so many games, to win two Big Ten titles,” said quarterback Connor Cook, who became Michigan State’s all-time leader in passing yards with 9,194.

“Win a Rose Bowl,” Cook said. “Win a Cotton Bowl. It’s just been so fun. The ride has been so fun. And the last thing I want to do is look at the downside and say, ‘Our last game as Spartans we lost.’ We want to be positive people. We want to look at the bright side. We’re just so lucky to play for Coach D and all the other coaches. That’s the only thing I’m trying to focus on right now, is the positives and how much fun we’ve had and the whole journey. Walking in as a freshman, I would have never experienced or never expected to have an experience like this.”

Their success as a team along with personal accomplishments made this year memorable. Cook’s 71 touchdown passes and 9,204 yards of total offense are the most in Michigan State history.

But with the Spartan rushing game limited to just 29 yards on 26 carries, Cook completed 19 of 39 passes for 210 yards. His interception at the end of the second quarter, when Alabama senior cornerback Cyrus Jones grabbed the pass near the Tide goal line to preserve Alabama’s 10-0 lead, changed the direction of the game.

For the seniors, despite their graduation and moving on, their legacy has laid the foundation for future teams to build on and succeed. They came within one game of a chance to play for the school’s first national championship since the 1966 Spartans ended the season with a No. 1 ranking in four polls recognized by the NCAA.

“Our senior class has the most wins in school history,” said senior linebacker Darien Harris. “We are Big Ten champions and have set the ground work for our underclassmen and are leaving a legacy for our younger players.”

Not long after the seniors left the field together for the final time, they started the process that will lead to the growth of the next generation of leaders.

“Shilique (Calhoun) pulled the team together while we were in (the locker room),” said offensive line coach Mark Staten, “and said, ‘Hey, let’s go. You young guys carry this forward. Feel the burn. Get back here next year and do something different.’

“They’re just such a great group of guys and they really took the foundation that was laid before them and built one heck of a house on it,” Staten went on. “They are going to be missed. You replace them but you can’t replace them. There’s never going to be another Jack Allen, there’s not going to be another Connor Cook… We are going to miss them. The nice thing about this place, a couple of our old players came by the hotel today and gave them big hugs. They are still part of the family.”

As the baton is passed to the next generation of Spartan leaders, they know they have had good examples. They know from the seniors how things can be successful. It is that leadership foundation that will keep them moving forward.

“They are a huge loss. Just the ability for Don (Donavon Clark) to go to four positions and Jack’s such a tremendous leader and such a warrior. He brings and he changes the huddle,” Staten said. “… You can’t replace a Jack Allen. You can assign somebody else in there but they won’t be a Jack Allen. So we got to get those guys up and continue to improve on their leadership abilities and we’ve got some young guys…They need to understand it’s all on you now. It’s your time.”