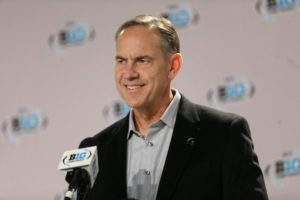 Mark Dantonio speaking to the media ahead of Saturday’s Big Ten Championship.

INDIANAPOLIS — The script has changed a number of times this year for Michigan State, but the objective remains the same – reach higher.

For the third time in the five Big Ten championship games, Michigan State will play at Lucas Oil Stadium in Indianapolis. An undefeated Iowa team stands in the way of the Spartans, with a potential spot in a College Football Playoff semifinal at stake.

“I hope that we stay grounded in who we are as a program and strive to do a little bit better than the year before,” Dantonio said. “When you’ve gotten to a point, you want to move further than that.”

In their previous conference title games – a win over previously undefeated Ohio State in 2013 and a narrow loss to Wisconsin in 2011 – the Spartans were playing for an appearance as the Big Ten representative in the Rose Bowl Game. The second season of the four-team playoff format has raised the stakes. No. 4 Iowa and No. 5 Michigan State will meet Saturday night in the equivalent of a national quarterfinal.

Undefeated, No. 1-ranked Clemson will meet North Carolina for the Atlantic Coast Conference championship. No. 2-ranked Alabama, 11-1, will face Florida for the Southeastern Conference title. No. 3-ranked Oklahoma, the Big 12 champion, finished its regular season with an 11-1 mark.

After the 34-24 win over Ohio State in the 2013 championship game, Michigan State was rewarded with a matchup in the 100th Rose Bowl Game against Stanford. This year, however, a semifinal appearance in the Cotton Bowl or Orange Bowl is in the cards if the Spartans can hand Iowa its first loss of the season.

Despite the continued success of the program, Dantonio hopes the Spartans will continue to approach each game with an underdog mentality. He said playing with a chip on their shoulder gives them an edge that has allowed the program to flourish over the past five years.

As recently as four weeks ago, Michigan State seemed like a long shot to play in this game, but the college football season doesn’t go by a script. A one-point loss at Nebraska, decided by a controversial Husker touchdown with 17 seconds to play, was the gut punch the Spartans weren’t expecting.

With its season hanging in the balance, Michigan State won its final three games. Without injured senior quarterback Connor Cook, a stunning 17-14 upset of undefeated defending champion Ohio State in Columbus was built upon a defense that held the Buckeyes to just 130 total yards.

“I would describe our personality as very determined,” Dantonio said.

That determination was never more evident than it was during wins over the Spartans’ two biggest rivals. Against Ohio State and Michigan, the Spartans won on the final play without holding a lead for the entire game to that point.

The Buckeyes entered the season as prohibitive favorites to repeat as Big Ten champions with the Spartans viewed by some as little more than a bump in the road after losing running back Jeremy Langford and cornerback Trae Waynes to the NFL Draft.

The Spartans, however, didn’t flinch. For the second time in three years, Michigan State dashed the national title hopes of the Buckeyes. This time around, the undefeated Hawkeyes are the obstacle.

The Spartans are favored tomorrow night, but that approach hasn’t changed. Dantonio’s group will attempt to reach higher, all the way to the College Football Playoff.