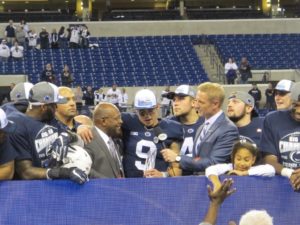 After being named the most valuable player of the Big Ten Championship, Trace McSorley puts his arm around two-time Heisman winner Archie Griffin. McSorley led Penn State to a 38-31 win over Wisconsin.

INDIANAPOLIS – A few ticks after midnight, Penn State quarterback Trace McSorley was at the center of a celebration as unforeseeable as it was dramatic. He stood on a stage in Lucas Oil Stadium, his right hand on the shoulder of two-time Heisman winner Archie Griffin, his left clutching the Grange-Griffin Championship Game Most Valuable Player Trophy.

McSorley’s record-setting night had helped Penn State overcome a 21-point deficit in a 38-31 victory over Wisconsin in the Big Ten Football Championship Game.

Moments later, senior center and captain Brian Gaia was lifting the Stagg Championship Trophy over his head as he walked toward the southwest tunnel.

Just a few hours after McSorley had been trying to escape a fierce Wisconsin pass rush, he completed a night with Big Ten Championship Game records of 384 passing yards and four touchdown passes. Gaia, whose bad snap created an early Wisconsin touchdown and widened a Badger advantage that seemed headed for dominance, was at the core of consistent pass protection that made a record night possible. Penn State, 11-2, secured its first conference championship since 2008, the first outright in 22 years, and will be headed to its 47th bowl game.

Penn State was guaranteed its fourth appearance in the Rose Bowl, its third as a Big Ten member. The Lions, who were ranked No. 7 in the next-to-last College Football Playoff ranking, hoped for a spot in a semifinal game. Wisconsin (10-3), had been ranked No. 6.

Any chance for a conference championship seemed to be slipping away from the Lions at just under the 10-minute mark of the second quarter, when Gaia’s snap sailed well over McSorley’s head. McSorley dove on the loose ball, but it jumped off the turf through his arms and into Ryan Connelly’s. The Wisconsin linebacker spun around running back Saquon Barkley and landed in the end zone giving the Badgers a 21-7 lead.

At just under the four minute mark of the second quarter, unable to stop the powerful Wisconsin running game, the Nittany Lions lined up to attempt to convert a fourth-and-short for the second time in the half. Both attempts failed. On this one, McSorley dropped back to throw and got sandwiched between Wisconsin defenders T.J. Watt and D’Cota Dixon. Watt scored a trifecta tallying a sack, forced fumble and fumble recovery on the play. McSorley limped off the field with his team trailing 28-7.

After the bad snap, Gaia said, he thought he deserved to be benched.

“Pull me,” Gaia said. “I don’t know. I just blew it. All the guys were there supporting me. From there on out I just had to focus on snapping and getting it back there. And I think it worked out.”

Things most certainly worked out for Gaia and his teammates.

After falling behind by three scores, Penn State outscored Wisconsin 31-3 in the final 35:14. The comeback began near the end of the second quarter, when junior Saeed Blacknall, who would set a game record with 155 receiving yards, caught a pass on an out route. Wisconsin defensive back Lubern Figaro’s missed tackle allowed Blacknall to score a 40-yard touchdown with 58 seconds left, and suddenly the Lions were within two touchdowns.

Penn State head coach James Franklin acknowledged that his team was fortunate to only be down 14 at half. He remained confident at the break. His team has responded and finished strong all season.

“I don’t like the fact that we don’t get started as quickly as I think we can, but I do like the fact that I’m able to come in at halftime and say to our guys that we’re a second-half team,” Franklin said. “I think the last eight games of the year we averaged 27 points in the second half and only gave up six. So after telling the guys that and talking to the guys in the locker room, I felt like we left the locker room really confident.”

Coach’s stat is close enough. Over the past eight games, all Penn State wins, the Lions have averaged 26.9 points in the second half while only allowing an average of 6.6 points.

Right on cue, Franklin’s team came out on fire in the second half.

On Penn State’s first offensive play of the third quarter, McSorley again found Blacknall. Wisconsin defensive backs Natrell Jamerson and Dixon got crossed up and lost Blacknall who ran untouched to the end zone for a 70-yard touchdown.

McSorley was just getting started. He shredded the Wisconsin secondary, a unit that led the nation in interceptions, with long completion after long completion. McSorley’s record total of 384 yards gave him 3,360 yards for the season, which surpassed Matt McGloin’s single-season school record of 3,266 set in 2012.

McSorley completed his first seven passes of the second half for 189 yards and two touchdowns. His receivers were coming down with everything.

Senior DaeSean Hamilton added a series of big catches as well, finishing with 8 receptions for 118 yards.

McSorley’s fourth and final touchdown was a perfectly thrown ball early in the fourth quarter. The pass dropped into Barkley’s hands in the corner of the end zone for an 18-yard score that gave Penn State its first lead, 35-31.

Despite being outscored 24-3 in the second half, the Badgers still had a chance late in the fourth quarter. Wisconsin marched down the field, only needing a touchdown to force overtime.

The game came down to a fourth-and-one at the Penn State 24-yard line. Wisconsin quarterback Bart Houston handed the ball to Corey Clement who was stuffed for no gain by junior cornerback Grant Haley with 1:01 to go. Earlier in the season, Haley’s 60-yard touchdown return of a blocked field goal had been the difference in a key victory over then-No. 2 Ohio State.

Penn State had done it. Only five years after being leveled by the Jerry Sandusky sexual abuse scandal and the resulting NCAA sanctions imposed in 2012, the Nittany Lions had climbed all the way back to the top of the Big Ten. They won the trophy originally named the Stagg-Paterno Championship Trophy before the name of Joe Paterno, the long-time head coach, was removed shortly after his firing in the wake of the scandal.

After the game, Blacknall put the win in perspective for a program’s dramatic rise.

“I just think it puts us in a better light as far as the past,” Blacknall said. “And I think this win will, not necessarily cover it up, because it still exists. But it’s one of those things where we can take another step as a university and as this whole family of Penn State.”