HOUSTON – Thirteen and one-half seconds. Two miracle shots. One national champion. Those 13.5 seconds will forever live in college basketball folklore. As the buzzer sounded, Kris Jenkins’ 3-point shot sent the Villanova Wildcats into a frenzy, their 77-74 victory over the North Carolina Tar Heels one of the most memorable title games in the history of the NCAA tournament.

Villanova (35-5) won its second national championship, the first since the 1985 Wildcats upset Georgetown. Jenkins’ game-winning basket was the first buzzer beater in a championship game since Lorenzo Charles of North Carolina State dunked an airball by Dereck Whittenburg to give the Wolfpack a shocking 54-52 victory over the University of Houston. 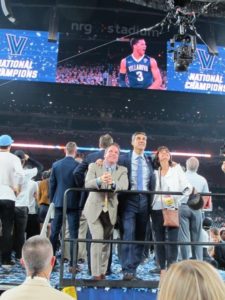 When Jenkins released the shot, Villanova coach Jay Wright appeared to say, “Bang.” Wright calmly turned to his right, toward midcourt, for the post-game handshake. He raised both arms, palms pointing toward the ceiling, and shrugged.

“It is still surreal,” Wright said. “I don’t think I’ve really digested this yet. I really don’t. I’m still in my coaching mind, making sure we handle things properly, making sure we cut down the net correctly, we take care of our responsibilities here. I don’t think this has hit me yet.
“It’s amazing,” he went on. “It’s amazing to be out there watching One Shining Moment, standing up on the stage, seeing those kids cut down the net. I don’t really think I have the words to explain it.”

The championship-winning shot was set up by Ryan Arcidiacono, who was voted Most Outstanding Player and scored 16 points. Jenkins scored 14 points on 6-of-11 shooting. Phil Booth came off the bench to lead Villanova with 20 points on 6-of-7 shooting. The Wildcats made 58.3 percent of their shots and outscored North Carolina in the paint, 32-26, despite being outrebounded, 36-23.

Villanova took a 10-point lead, the largest for either team, with 5:29 to play. But that lead slipped away as the clock ticked down and the Tar Heels produced what could have been one of the most memorable moments in the recent history of the tournament.

With the Tar Heels trailing, 74-71 and time ticking away, North Carolina guard Marcus Paige rose up to try to send the game into overtime. He double clutched, with Arcidiacono launching toward him.

Paige buried it. Bedlam. NRG Stadium erupted. In jubilation, Tar Heel fans flung seat cushions into the air. The comparison became immediate: Paige had produced the 2016 version of the shot by Mario Chalmers of Kansas with 2.1 seconds to play in regulation time, leading to an overtime victory over Memphis for the 2008 championship. Overtime was surely around the corner.

“I told my team when I made the shot, we go to overtime, we got 4.7 seconds to play defense and this game is ours,” Paige said. “No matter what, we were going to win the overtime.”

But first, there were those 4.7 seconds.

“We drew up a play,” Arcidiacono said. “We knew what play we were going to at the end of the game, because we work on it every single day in practice. I wanted to be aggressive. If I could get a shot, I was going to shoot it. But I heard someone screaming in the back of my head.”

Arcidiacono was the senior who had led a four-year journey to this moment. With the game he had had up to that point –16 points on 6-of- 9 shooting – he had earned the right to take the last shot. But he heard Jenkins’s voice. 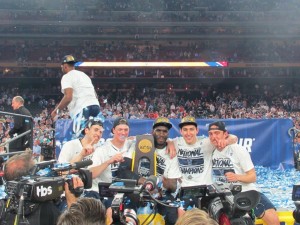 “I was able to get in his vision,” Jenkins said. “I was open, so I was screaming at him.” Jenkins caught the pass, rose up, and drained the game winner as the final buzzer sounded.

Confetti exploded from the scoreboard. The Wildcats dogpiled onto the hardwood.

The moment was so stunning that Ochefu was not part of the pile. “I was lost,” he said. “I walked around in a circle for about five minutes.”

The Tar Heels (33-7) had won the last four national championship games they had reached since losing to Indiana in the 1981 title game. Carolina’s total of 26 points in the paint was the second-lowest of the season. The Tar Heels had a record of 0-6 when they were outscored in the paint.

“So much of this year and last year….they were criticized for not being tough enough. I don’t know that I’ve ever had anybody make a tougher shot than Marcus Paige made.”

It was the last Carolina shot of the season. It just wasn’t the last of the game. 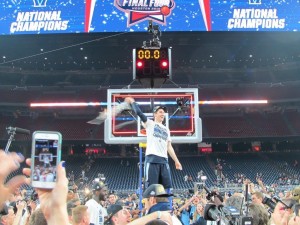 Jenkins spoke of Arcidiacono with admiration. “For him to be so unselfish and give up the ball, you know, it just shows what type of teammate he is, what type of person he is,” Jenkins said. “You know, we put a lot of work in. This team, everybody has the confidence to catch and shoot.”

Standing on the victory stand with teammates all around, Arcidiacono heard an announcement over the loud speakers in the stadium. He had just been named the Most Outstanding Player of the Final Four. In the glory of the final moment of a national championship career, Ryan Arcidiacono had a correction to make.