Jeff Washburn’s Devotion to the World He Loved

(Editor’s note: Hall of Fame sports reporter Jeff Washburn, who passed away Nov. 29 at the age of 63, was buried Thursday in Lafayette, IN. The funeral took place Wednesday night in The Crawley Athletic Center in Jefferson High School. Washburn worked for the Lafayette Journal and Courier and the Associated Press, among other outlets. The 1991 Indiana Sportswriter of the Year, Washburn received the Silver Medal Award from the Indiana Basketball Hall of Fame in 2011. The officiant was Dr. Sally Downham Miller. The speakers included Purdue men’s basketball coach Matt Painter. The eulogies were delivered by his son Jade, who has written for the Associated Press, and this one delivered by Sports Capital Journalism Program director Malcolm Moran.)

There’s a story that sportswriters share about a conversation that took place years ago in the press box at Fenway Park in Boston, hours before the Red Sox were going to play. As the local scribes were unpacking their things, they were talking about the same thing that everyone in town was talking about, the spike in lottery prize money. As they shared their dream destinations, the scribes noticed that one of them, off to the side, was not saying anything.

So they asked: How about you? What would you do?

And here was the response:

“Not even the courtesy of a phone call.”

The dirty little secret about life in the press box is the amount of moaning and groaning and whining that takes place nearly every day and every night. It is against this dour backdrop that the qualities of Jeff Washburn would shine every time he walked through that door.

There is no doubt that if he had hit the big number, there would have been no reason for any phone call. Because the next day, he would have been right back at work, doing a job that didn’t feel like a job.

Day after day, season after season, there have been two undisputable truths about him.

First, no one, in any press box, loved being there more than he did. 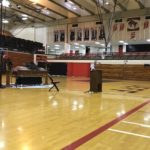 He loved the people, the chance to connect, the never-ending search for that next story, the theatre-in-the-round of a raucous night in Mackey and the challenge of describing great competition and the people that made it happen.

Second, and this is very important: Jeff Washburn could have distinguished himself at any newspaper in America.

But that’s not why we’re here.

The fact that he chose to commit to a lifetime here became the great good fortune of everyone in this community that cares about this school, all the other high schools in Indiana, Purdue, the Big Ten, and all the other places and traditions that mean so much to so many.

The strange thing is that for all of the time I once spent in press boxes in my previous life as a reporter, our friendship did not have its roots there. We first crossed paths through a collection of characters whose legend has extended for more than 30 years.

When Sally Downham Miller and I were talking, she had a question for me: Wasn’t there some group that had something to do with a family?

The Fun Family was a group of reporters at the Journal and Courier, young, talented and ambitious, with dreams and a drive that would one day take them all over the world.

There was one other thing.

As Mary Fastenau, a card-carrying member, so eloquently said: “We were such idiots.”

But then she said this: “And he took us under his wing.”

For the Fun Family had the good sense to decide that it needed Jeff Washburn to become…what?

Boy, was he in trouble.

If the Fun Family had existed in an era of social media and the smart phone, the bean counters at the Gannett Company would not have had to create a plan for corporate downsizing. The Fun Family would have done it for them.

When Karla Hudecek was called up to join the Fun Family roster, I became inspired to discover how many ways I could make a detour to Lafayette, Indiana from just about anywhere. That is how I crossed paths with Wash.

He wasn’t just Wash. The initial greeting was: Waaash!

Except I hardly ever called him that. I called him the Big Dog, because as he explained, borrowing a line from the movie “Tin Cup,” just kick back and let the big dog eat. The entry on my smart phone says, “Mr. Big Dog.”

With his guidance, the Fun Family developed this habit of creating adventures that tended to be late enough — and loud enough — to attract the attention of bystanders, some of whom were not entirely amused.

When one April Fool’s Day became Mary’s fake wedding day, a shotgun wedding that featured Frank Oliver as a bridesmaid and Ken Rains supplying a real shotgun, everyone was relieved when they learned that the visit from the Lafayette Police Department was a setup, a prank, a joke.

The problem was that the second visit was not a joke.

On January 13, 1981, Jeff Washburn Day, as the entire newsroom was at work in its solemn daily search for truth – now try to picture this – everyone was wearing flannel shirts and jeans with glasses and fake mustaches. And there was pizza, Arni’s pizza with extra paste, just like Wash liked it.

Then there was his 30th birthday party, attended by his father, Sonny, and his mother, Maxine, the official photographer of the Fun Family whose meticulous captions detailed that time in their lives. The party theme came from the Family outlook that life as we know it ends at the age of 30, so the guest of honor appeared in effigy, with nylons stuffing a flannel shirt and jeans, accompanied by the obligatory mustache and glasses. A refrigerator box was transformed into a coffin. A Purdue band member was hired to play “Taps” on Highland Avenue.

Now, this story creates an issue of eulogy etiquette: How do you talk about a fake funeral at a real one?

And so it is. In the last week, how many of us have thought, or said, or heard someone say that’s so Wash? In the present tense, still.

How many of us can enjoy our own funeral and be in on the joke?

Something happened when the members of the Fun Family, one by one, followed their dreams out of town. Rather than being resentful, Jeff celebrated their success, even as his phone calls to the other side of the world might wake them up at four in the morning.

Generosity of spirit is so Wash.

He had shown them, through his example, what it means to be part of a news organization, the responsibility of joining a community and the importance of earning trust. Friends for life, they said when they left, and they were. Friends for life.

How many times have we all used the word “gift” to describe something he had done for us?

In the last several years, something remarkable happened. Jeff Washburn reinvented himself. He expanded his comfort zone. When Bob Rohrman needed a great storyteller to tell his story, there was a book. When there were opportunities to cover events in Indianapolis, Jeff became an even bigger presence there, and the respect he had earned in the press room years before became greater.

Last March, when the first and second rounds of the NCAA tournament were at Bankers Life Fieldhouse, there he was in the work room. After we caught up, he started saying how concerned he was about the state of the business and the influences that might negatively affect the careers of students.

So I did what any self-respecting academic would do. I knew a great guest speaker when I saw one. I asked if he could speak to my class. And when he did it became a masterclass.

He never preached. One by one, he appealed to every student to call upon their better selves through their commitment to their craft.

He told the story he rarely shared, the one about himself. He talked about Cheryl, and how it took a while before she became the bride because there was her very understandable concern about having a husband that came home from work at 1 o’clock in the morning, and on weekends, too. He talked about Jade, the son he had thought about long before Jade arrived, and the enormous sense of pride, not just in Jade’s work, but in the man he had become.

And his pride came through when he described one of the most stressful episodes of his career, in 2011, when multiple reports in credible places said that Matt Painter was leaving Purdue for Missouri and the walls started closing in. Everything that Jeff stood for, the value of decades-long relationships and the understanding they can create, was being challenged on a national stage.

Jeff was so proud as he explained that he had something as good as the truth. He had the word of a certain former coach of the Boilermakers, who was absolutely certain the stories were false.

Jeff scowled as he spoke, just like his source: “If you write that he’s leaving, that story is going to be…” He made a reference to equine excrement.

Nobody made that barnyard reference quite like Gene Keady, with the possible exception of Earl Weaver, the Earl of Baltimore, the manager of the Orioles and Wash’s Guy. Jeff told the class that he told his bosses, “This guy has never lied to me.”

In a relationship business, Jeff was the ultimate relationship builder. He staked his reputation on the word of someone he knew he could trust. And that is how the Journal and Courier got it right.

He took so much pride in getting it right. Not so he could thump his chest. But because taking a chance on a risky story would have been an act of betrayal to his readers.

A fierce commitment to accuracy is so Wash.

There is one last thing I have thought and heard in the last week. After things started happening more quickly than nearly any of us could have realized, we’ve thought why didn’t I make that extra call? Why didn’t I send that note I meant to send?

If you’ve thought that, or if you’re thinking that right now, please remember one very basic truth about the beauty of the world he loved so much.

When it’s 11 o’clock or midnight or one in the morning and a press room is starting to empty at the end of the night, when you hit send and pack up there’s the quiet routine of what Mark Monteith called the “on-deadline good night.” You’re not saying goodbye as much as you’re saying see you down the road. Safe travels. See you next time.

Next time could be tomorrow afternoon in the same place, or it could be a couple of years from now in a press box miles away, but when next time comes the conversation resumes as if it never stopped.

So safe travels, Mr. Big Dog. See you down the road. Think of the stories you’ll tell — we’ll all tell — when we’re together again with our friend Wash.