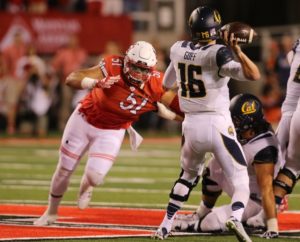 Jason Fanaika sat at the center of the table in Lucas Oil Stadium, fielding each question reporters threw his way. The former Utah defensive tackle had much on his mind: his National Football League Scouting Combine weigh in earlier in the morning, his schedule of meetings with league coaches and managers later in the day, his on-field workouts and skills tests ahead this week.

But there was one word Fanaika thought was appropriate in describing how it felt to be sitting where he was, almost four years to the date after he first arrived in Indianapolis.

“It feels like just yesterday I was telling my friends it would be crazy to be back here for the Combine,” Fanaika said. “I told myself that, one day, I wanted to be here for this event, and here I am.

Considering Fanaika’s road leading to April’s draft, it’s easy to see why he would feel that way.

Fanaika first started his college football career at Utah State, seeking to earn his role as a linebacker under then-head coach Gary Andersen. After two years with the Aggies, however, Fanaika left to serve on an LDS mission in Indianapolis, walking into Lucas Oil Stadium in 2012 as a missionary on tour.

“I wanted to take time to be in the world but not of the world,” Fanaika said. “You learn to be selfless and forget about yourself, just serve people, and enhance the belief of Christ in anybody you can.”

But his mission was cut short. After nine months away from football, Fanaika was informed that his father had been diagnosed with colon cancer.

His father would be cancer-free two years after the diagnosis. But at the time, Fanaika said, football would have to be put on hold.

“I decided to go home to help out the family with anything they needed,” he remembered. “My mom was fully loaded, had a full-time job and three kids on top of taking care of my dad. It was my choice to leave everything behind; they didn’t ask me to do it, but I felt like it was my responsibility, my duty to help in any way I can.”

Fanaika spent two months at a home security company. He was a full-time credit consultant for six.

He helped out in his uncle’s machine shop at night, built fences with his brother-in-law when he needed to. And with supporting the family as his first priority, Fanaika knew he’d likely take on a variety of different jobs to stay afloat.

Becoming one of Utah’s premier edge rushers was not one of them.

“I knew I still wanted to play football, but at the time, all I did was hit the gym whenever I could,” Fanaika said. “I would be running around dropping off the kids to and from school, and any second I had off, I’d be in the gym.”

Fanaika sought an opportunity to play closer to home, and after taking classes at Salt Lake Community College in 2013, Fanaika walked on at Utah and quickly established a presence.

Aware that his time away from football would be a factor heading into April, Fanaika hoped to utilize this opportunity to show off his versatility as a defender.

“Versatility is my biggest strength,” Fanaika said. “I think I will surprise some people with how much I’ve improved in pass rush since the season ended, and if you throw on the tape, you’ll see that I’ve played at defensive end, defensive tackle, nose tackle, middle linebacker and outside linebacker. I think I have a lot to offer.”

And while Fanaika has his sights set on impressing, he’ll be sure to take advantage of the time he’ll spend just being here, something that wasn’t guaranteed to him four years ago.

“Everybody here is to show off to scouts and all the teams, but it’s also very important to be grateful,” Fanaika said. “It blows my mind that I’m here in such a totally different atmosphere than I was in when I came as a missionary. This is truly all a blessing.”