The championship challenge of a perfect Iowa season 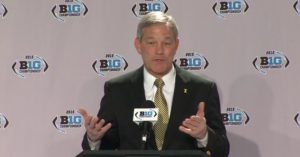 Kirk Ferentz speaks to the media ahead of Saturday’s Big Ten Championship Game.

INDIANAPOLIS — The University of Iowa makes its inaugural appearance in the Big Ten championship game this weekend after a school-record 12-0 season. The Hawkeyes have not performed on as big a stage as they will discover when they face Michigan State at Lucas Oil Stadium on Saturday night.

But Iowa coach Kirk Ferentz said that he does not feel as though they have become overwhelmed or unfocused by the twin challenges of a conference championship and potential College Football Playoff spot.

“There is no secret to our success,” he said. “The players have great respect for each other and they’ve been able to focus on what they need to do week after week.”

Ferentz emphasized the importance of avoiding off-field issues this season, and the value of educating players on the consequences of outside distractions. He lectured his team throughout the season about the importance of details in everything. He called anything that would detract from being successful, in academics or in football, a “selfish act.” The Hawkeyes needed to be great players and great citizens.

The rigid focus on football paid off, as the Hawkeyes finished the season as the champions of the Big Ten West Division.

The success is due in large part to Iowa’s defense, which allowed just nine rushing touchdowns, fewest in the Big Ten and sixth in the NCAA. Iowa led the conference in interceptions (17), takeaways (25) and turnover margin (plus 14).

Junior defensive back Desmond King was an anchor for the team and an integral part of the dominant unit, leading the country with eight interceptions. King is one of three finalists for the Jim Thorpe Award as the country’s top defensive back.

However, the unit will face a tough challenge in Michigan State quarterback Connor Cook, who came back for his senior season for the sole purpose of winning a national title. According to his coach, Mark Dantonio, Cook is having his best year yet.

That is a potentially scary prospect for the Hawkeyes, as Cook was voted the Grange-Griffin Most Valuable Player in the 2013 Big Ten championship game victory over Ohio State. Cook has thrown just five interceptions this season and benefits from playing behind an offensive line that is a finalist for the Joe Moore Award for the top offensive line unit in the country.

While the two teams seem to dominate in different ways, the two teams are eerily similar in many respects, according to both Ferentz and Dantonio.

Iowa is also a finalist for the Joe Moore Award and Michigan State is tied with Iowa for turnover margin. The teams also have nearly identical scoring averages, the Hawkeyes with 33.7 points per game and the Spartans with 33.4, foreshadowing a possible offensive shootout.

Ferentz, in his 17th season as coach of the Hawkeyes, said that it’s an honor to have been a part of the University of Iowa athletic program for so long and a part of the Big Ten.

“This conference has been strong for a long, long time,” he said. “To me, this conference represents all that’s good about college athletics.”

While Ferentz is trying to keep his players calm and focused, he doesn’t deny the significance of the moment for this team. “You really don’t have time to catch your breath, admire your work,” he said. “If you do, you’re losing valuable time.”