INDIANAPOLIS – They still had work to do. One game was not going to define this season for the Indiana Hoosiers, not even this one, the 62-51 quarterfinal victory over the eighth-ranked Maryland Terrapins, the two-time defending champions of the Big Ten Women’s Basketball Tournament. The Terrapins, a dominant offensive team with history and pedigree on their side, had been nothing short of dynastic since their first Big Ten season in 2015. They won 19 of their first 21 Big Ten tournament games, and celebrated five championships, and their only defeats had come in the title game.

So when the final horn sounded in Gainbridge Fieldhouse on Friday afternoon, there were hugs on the Indiana bench and high-fives with the pep band on the way off the court. But there was still work to do. You had to listen to the words of Teri Moren, the coach and architect of an emerging program, to understand the meaning of this victory. The achievement may not have represented a championship or Final Four win. But it was hard to overstate how important this moment had become for the Hoosiers.

A reality that had extended through eight seasons was interrupted by the resilience of junior forward Mackenzie Holmes, who scored 17 points on 7-of-10 shooting soon after missing eight games with a knee injury, and the persistence of senior guard Grace Berger, who was held to 5-of-14 shooting but contributed 16 points and 11 rebounds.

In their 28 years of competing in the Big Ten tournament, the Hoosiers have won twice just four times, in 1997, the championship year of 2002, 2006, and this week. Indiana (21-7) will meet top-seeded Ohio State on Saturday for a spot in a second Big Ten final.

This afternoon was as much about what did not happen as what did. The Hoosiers were responsible for that.

“In the past playing Maryland,” Berger said, “…they have kind of come out more aggressive from the beginning and we found ourself dug in a hole, digging out of a hole the rest of the game. So I think just to get the 50-50 balls and control what you can control and be the team that really threw the first punch, I think that’s really what carried us today.”

Indiana threw the first punch, and the next, and soon it was clear the punches would not stop. Maryland’s total of 51 points was 28 beneath its previous average, the eighth-best in the nation, and was just two points more than the season-low. Maryland’s biggest lead, 2-0, came 14 seconds into the game. The last lead, 5-4, was with 5:27 to go in the first quarter. The two-time defending champion, which had never failed to reach the title game in seven previous tournaments, led for a total of 1:12.

The Hoosiers held the Terrapins at bay with a strong, staunch defensive effort. Maryland’s All-Big Ten second team members Chloe Bibby and Diamond Miller were limited to a combined eight points on 22 shots. All-Freshman team member and Sixth Player of the Year winner Shyanne Sellers was held to four points on nine shots. 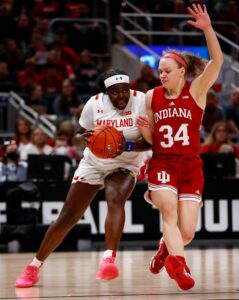 Starting point guard Katie Benzan played 38 minutes and did not score. Benzan, whose 3-point shooting percentage of 44.1 was 10th-best in the nation, missed her two 3-point attempts.

Angel Reese and Ashley Owusu combined for 35 points, but on 28 shots and with eight turnovers between the two of them.

Maryland (21-8) made just 31% of its shots and did not make one from behind the line. Maryland was one of the most efficient shooting teams in the country. The Terrapins had the 15th-best 3-point percentage in the nation during the regular season but weren’t able to connect on any of their 12 attempts on Friday. Indiana had struggled to defend behind the arc, ranking 240th in 3-point defense.

Owusu, the tournament’s Most Outstanding Player as a freshman in 2020, shared the honor with Miller last year. Owusu attributed the poor performance to just missing shots more being affected by the defense. “I’m not going to say we were rushing,” she said. “I just think that we didn’t shoot the ball as well from the 3-point line and I don’t think that’s like us.”

Maryland struggled with ball security in this game as well, finishing with 14 turnovers to nine assists. During the regular season they had the 15th best assist-to-turnover ratio in the country.
After dominating previous Big Ten tournaments, the direction of Maryland’s season suddenly became connected to a moment from its Atlantic Coast Conference history.

“In 2014, our ACC team lost in the first round,” said Maryland coach Brenda Frese, “and they went to the Final Four.”

For Maryland, an unexpected ending had just become a beginning.

For Indiana, there is that work to do. “For me it’s a big win,” Berger said, “but at the end of the day it’s just the quarterfinals. We still have two more games. Our goal is to win the Big Ten championship and then we’ll worry about the NCAA tournament.”

Holmes reinforced Moren’s message. “Coach was saying in the locker room,” she said, “(that) having that championship mentality every single game is going to get us far.”