INDIANAPOLIS — Standing on the stage for the trophy presentation, surrounded by his teammates, Aidan Hutchinson held up his Grange-Griffin Most Valuable Player Award after leading the Michigan Wolverines to a dominant victory over Iowa in the Big Ten Championship Football Game at Lucas Oil Stadium.

He had led his teammates through the journey to a championship, from the relentless work of an uncertain summer all the way to their celebration. And now those teammates were leading the cheers.

“Man, it’s just so cool to have — to see my teammates have my back like that and see them supporting me and doing all that, man,” Hutchinson said. “That was such a cool moment. And, man, it was so great just to see that and experience that.” 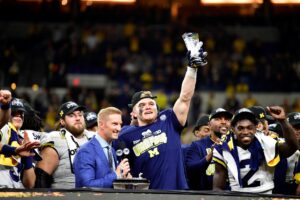 His championship legacy had just validated the message on the sign Michigan players have seen each day for decades: “Those Who Stay Will Be Champions.” Led by Hutchinson, the Michigan defense limited the Hawkeyes’ offense to 279 total yards. He kept pressure on the quarterback the entire game while finishing with four tackles, his 14th sack of the year and one tackle for loss.

Michigan graduate offensive lineman Andrew Vastardis made the case. “I think it’s pretty self-explanatory,” Vastardis said. “I think he deserves to be the Heisman Trophy winner. He showed out every week, been a game changer, not just Saturdays. That guy puts it on the line every day in practice, every day in meetings. More dialed in, more committed and more dedicated than any guy I’ve ever been around. So, you know, how can you not root for a guy like that that in our opinion deserves it fully?”

Hutchinson has already been named one of 13 finalists for the William V. Campbell Trophy, which will be awarded to the nation’s leading football scholar-athlete by the National Football Foundation on Tuesday.

He is one of four finalists for the Rotary Lombardi Award, to be announced on Wednesday.

Hutchinson had delayed a future in the National Football League for the opportunity to beat Ohio State and win a conference championship when many doubters questioned whether those things could happen.

The team knew they had something special starting from week one against Western Michigan.

“You know, we saw what we were about against Western Michigan,” he remembered. “I knew we had something special off the jump so — you know, really, the whole time, I knew we had something special. Just the way we built the team, the foundation, the high energy throughout the whole off-season. I mean, that doesn’t amount to wins, but, you know, it amounts to the culture and the investment of the guys on the team.”

After his decision to return, Hutchinson immediately got back into the weight room and wanted to be pushed beyond his limits. Michigan’s head coach, Jim Harbaugh, explained how he attacked the off-season and how contagious that dedication became to his teammates.

“From January you could see, you know, when he went into the weight coaches and said ‘I’m coming back, and every time I step into this weight room, make sure you wring me out, get everything out of me,’” said Harbaugh. “You could tell he was hungry. And the weight coaches said, ‘Yeah, this can be an all-you-can-eat buffet in here.’ And he ate it up.

“And I think that’s contagious, and others followed.”

Michigan had to overcome a losing streak against its rival, Ohio State, which had beaten Michigan in every game since 2012, by defeating the Buckeyes 45-27 in Ann Arbor on November 27. The challenge after a cathartic victory that left Hutchinson in tears was to refocus for a chance to compete for a Big Ten Championship.

“It was really hard after such an emotional win last week,” Hutchinson said. “I mean, that was just — it was insane….It was honestly hard a little bit, you know, personally to get over that just because it was something that you’ve been thinking about for years. But as you can see, you know, we got our game plan, we focused on that. And, you know, we had a very dominant win today.”

The win over the Buckeyes gave the Wolverines supreme confidence knowing they defeated a talented team.

“I think just beating Ohio State just for everybody’s mentals for sure, everybody’s minds, we overcame them, and we were moving on to bigger and better things, you know,” he said.

But as the stakes increased and the possibilities for Michigan and Hutchinson approached levels that were once little more than a dream, his focus included someone else.

Harbaugh said that Hutchinson approached him after four students were killed in a shooting at Oxford High School last Tuesday. One of the students, Tate Myre, was a leader of the school’s football team. “It was Aidan who came to me and wanted to dedicate this game to Tate Myre,” Harbaugh said. “…’Yes, let’s do that. Let’s do that.’”

As the Wolverines went about their business to prepare for a game, they weighed another question.

Myre’s parents and brothers were honorary captains at the pregame coin toss. The white Michigan jerseys included a patch with Myre’s number, his initials, and a small heart representing each of the four victims. There was one more connection, one that Harbaugh did not recognize until after his team’s final score.

The celebration had already started in the Michigan sections when kicker Jake Moody made his final conversion kick with just 1:25 to play.

Harbaugh was asked if the team would continue wearing the patch in the College Football Playoff. The coach looked toward Michigan’s leader.