About Us Sports Journalism Blog 2017 NCAA Men's Basketball Final Four Gonzaga, where the Kennel goes on the road and Bulldogs come home

Gonzaga, where the Kennel goes on the road and Bulldogs come home 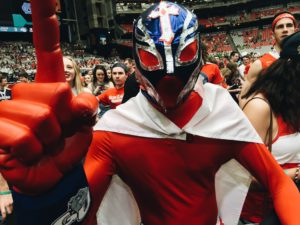 GLENDALE, Ariz. — The McCarthey Athletic Center is the 148,000 square foot home of Gonzaga Bulldogs basketball on the campus in Spokane, Wash.

When the Zags are in town, it needs every square inch to contain the Kennel Club.

“Most of the fun stuff we do involves half breaking the stands,” freshman Winston Holyfield said. “When I first experienced it, it was intimidating just as a freshman who doesn’t have to go out there and play.”

There are the student sections you know. The Cameron Crazies at Duke. The Oakland Zoo at Pittsburgh. The Izzone at Michigan State. The Kennel Club, however, is a whole different animal.

Since Gonzaga decided to invest in basketball as the face of the university in the early 2000s, the student body has responded in full force by making the Kennel one of the most feared arenas in the country for opposing teams. Minutes before tipoff, the McCarthey Athletic Center begins to rock as if it’s going to register on the Richter Scale.

“When it’s in the Kennel man, it’s intense,” Holyfield said as he stood in the student area near the court on Saturday afternoon. “When I first experienced it, it was intimidating just as a freshman who doesn’t have to go out there and play.”

To understand the love the students and the people of Spokane have for their Bulldogs is to see the culture of Gonzaga University. The term “family” tends to become a cliche, especially in sports. Maybe it’s the size of the university with 7,837 students or the remoteness of Spokane, but at Gonzaga, the family commitment rings true from the city and the students all the way to the players.

“It’s crazy to see such a family-like environment in an entire city,” redshirt junior Nigel Williams-Goss said. “I think it makes it a really special place to be. They’re a big motivation for us. To know the entire Zag community motivates us and pushes us to do special things because we take a lot of pride in giving those guys joy.”

Hundreds of Gonzaga students made the 1,325-mile trek across snowy roads and treacherous terrain to reach University of Phoenix Stadium this weekend. For Gonzaga volleyball teammates Maddie Jemes and Hailey Dunn, the journey was worth it to witness school history.

“We made this plan on Tuesday,” Jemes said. “We got the tickets on Wednesday night and we were like, ‘We’re doing this.’ So last night, we drove through the night, 22 hours. Through the snow.”

Fan support of Gonzaga basketball is woven into student life from the moment a freshman walks on campus. Supporting the Bulldogs on the court is as much a part of the college experience as an introductory English course. Students even learn cheers at orientation. From day one, everyone learns to be a Zag.

At University of Phoenix Stadium, students piled into the south end zone to bring a piece of the Kennel with them to the Final Four. Even without their unbreakable stands back home in the McCarthey Athletic Center, the Gonzaga students danced, chanted and jumped from tipoff to the final buzzer. Killian Tillie’s peers from Spokane were staring back at him when the 6-foot, 10-inch freshman reserve forward made his final clutch free throws to secure the 77-73 semifinal victory over South Carolina.

“It’s amazing,” Tillie said. “We know our students and our fans love us. That’s proof that they can do everything to see us play. It’s really important for us to have our students behind us and always support us.”

Back in Spokane, the university will host a watch party in the John J. Hemingson Center, the two-year-old university center, for the championship game Monday night. Sophomore Andrew Christianson said during the Elite Eight win over Xavier, the student center was filled to capacity with students hoping to experience Gonzaga history.

“It’s a three-story building, and it was standing room only the entire building,” said Christianson, who was dressed as a red and blue superhero with a luchador mask. Costumes and face paint was standard attire for this raucous crowd.

“Everyone was jumping and screaming,” Christianson said. “People were going crazy. Everyone the entire week has a smile on their face.”

“We’ve always had big-time support,” he said. “We knew a lot of people would be making the trip. Spokane is a ghost town now, I imagine. But if we played anywhere, we know Zag fans will find a way to be there. We can play Ukraine for a tournament game and they’ll go.”

Redshirt sophomore guard Josh Perkins agreed. “It just speaks to how much we’re loved around the city of Spokane,” he said. “Not only am I glad to call those people my friends in the stands, but it’s just people who cheer us on no matter what.

“I’m not driving 22 hours, you know,” Perkins said. “So love them for doing that, and I’m sure the school was going crazy for us.”

This experience sticks with players even after they leave Spokane, Matthews added. There is always room when the Bulldogs come home.

“We’re family,” Matthews said. “Just seeing how many Zags were at our film session two days ago right before we played South Carolina. There were 40 of them in there. There will be guys in there that you’ve never met before and they will treat you like family. The program we’re in is like a club.”