From the San Francisco Chronicle: The Super Bowl’s legendary photographers 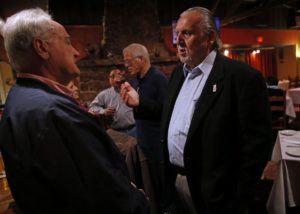 Photographers Mickey Palmer (right) and John Biever chat before they are celebrated at a dinner honoring their 50th Super Bowl as photographers in Half Moon Bay, Calif., on Thursday, February 4, 2016.

The Super Bowl’s true spirit came to life Thursday night at a midway point — not San Francisco or Santa Clara, but a restaurant in Half Moon Bay, where an assemblage of royalty gathered for a glorious reunion. Football heroes come and go, but the photographers persevere.

The guests of honor were Mickey Palmer and John Biever, two of the three men who have shot all 49 Super Bowls and will be at Levi’s Stadium on Sunday. The third, Walter Iooss, couldn’t make the party but will work the game, as well. From Bart Starr and Daryle Lamonica to Tom Brady and David Tyree, they haven’t missed a Super Bowl. And there was a fourth man, 80-year-old Tony Tomsic, who had to miss his 49th straight last year due to a stroke. But he’s back, and that was just a tough break, and he is most welcome.

The scene at Mezza Luna resembled a sort of Hall of Fame dinner, including legendary Sports Illustrated photographers John McDonough, Johnny Iacono and Peter Read Miller, as well as Pleasanton’s Brad Mangin — probably the most respected baseball shooter in the country — and iconic San Franciscan Michael Zagaris, an official 49ers photographer since 1973 and, like all of these guys, a true character.

Continue reading Through the lens: the Super Bowl’s legendary photographers