About Us Sports Journalism Blog 2015-16 College Football Playoff National Championship From the Parking Lot: One fan’s spontaneous journey to Glendale

From the Parking Lot: One fan’s spontaneous journey to Glendale

GLENDALE, Ariz. – When Fred Huff woke up on Sunday morning he was just trying to get the motivation to get out of bed to go back to work. 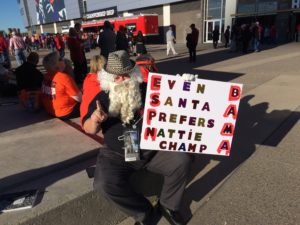 Employed as a police officer near the Santa Fe, New Mexico area, Huff had finished working a grueling double shift roughly 12 hours earlier. He had agreed to take another officer’s shift earlier in the week, a decision that he was starting to regret.

However, within ten minutes he would receive two phone calls that would change the outlook of his next few days.

“First, I got a call from my buddy at work,” said Huff. “I had agreed to pick up his shift on Tuesday and he was just calling to let me know that he didn’t need me to do that for him anymore.”

Elated, Huff got back into bed and decided he was going to try and get some more sleep. Once he was back in bed, his phone rang again. This time around it was an old buddy who had a proposition that Huff had heard once or twice before.

“He told me that he may be able to get us tickets to the national championship game,” said Huff. “When he said that I was all in.”

A diehard Alabama fan from his days living near Montgomery, Alabama, Huff has attended over thirty Alabama games in the last ten years.

He had previously attempted to go to the past three times that Alabama had gotten to the national championship game under Saban. Of those three trips, only one ultimately paid off.

“We got into the 2010 game versus Texas in Pasadena,” he said. “Without a doubt the best experience of my life. We didn’t get the tickets until an hour before the game and we barely even made it to the game on time.”

Huff never forgot the heartbreak of the other two times they didn’t get in.

“It’s not fun to stand outside a stadium when the game is going on,” he said. “What’s worse is listening to the game on the radio on the ride home.”

As his friend told him numerous times over the phone, it was no guarantee that he would actually get his ticket this time around. Everyone else that they would be going with already had tickets, so the hope was that another friend they knew would be able to get Huff a ticket the day of the game.

If that didn’t happen, then Huff would be stuck outside the stadium while his friends all sat on the inside.

Realizing that he wasn’t scheduled to work again until Wednesday, Huff agreed to get in the car and immediately drive to Phoenix.

“I said, ‘What the heck,’” he said. “I had a place to stay, my own transportation and the time to do it. At least I would have got to experience the atmosphere around the game if I didn’t get in.”

To his relief, about two hours away from kickoff his friend did indeed come through for him.

“I was holding my breath all day,” he said. “When I got out of my car in the parking lot and I saw that (he) was giving me the thumbs up, I just about could have kissed him.”

As Huff said, you never know when the chance will come up again to see your favorite team play for all the marbles.

“I couldn’t say no,” he said. “For all you know, they may never get back here again.”