From IUPUI graduate Zak Keefer: In appreciation of Peyton Manning

He was different from the start, the privileged son of an NFL quarterback who scoffed at the idea of shortcuts. At times it felt like he was engineered in some sort of football laboratory, this 6-5, 230-pound quarterbacking machine with that laser, rocket right arm and the mind of an offensive coordinator to match, constructed to make all the right reads and all the right throws and when he was finished, say all the right things.

Hours after signing his first professional contract, the Indianapolis Colts’ rookie quarterback and newly minted $48 million man was asked what he planned on doing with all that money. 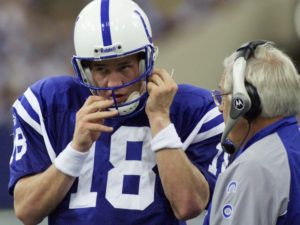 How many 22-year-olds say that?

Of course he did. He was a throwback from the very beginning. Even a young Peyton Manning never seemed all that young. That he lived alone in a two-bedroom apartment those first few years in Indianapolis wasn’t an accident: He wanted nothing to go home to. He stayed at the Colts’ West 56th Street practice facility until 10 p.m. most nights during the season, poring through film with assistant coaches. Some nights he’d fall asleep, remote in hand.

Which, of course, left him ill-equipped to complete some of the most elementary of domestic tasks. According to a 1999 profile in Sports Illustrated, this included hooking up a DVD player to his TV and opening a can of soup. Imagine: Peyton Manning, athletic wunderkind who’d go on to carve up NFL defenses for two decades, had met his match. A can of Campbell’s chicken noodle.

He lacked no such assurance on the football field, where he better resembled a general commanding his troops than a quarterback calling plays. Manning once grew so incensed at his offensive line after he was sacked in a game that he lit into them on the sidelines. “Come on, line, block!” he shouted. He was in the seventh grade.