INDIANAPOLIS – Tennessee and UConn were on a collision course. The Volunteers started the 1994-95 season ranked No. 1 in the AP poll; the Huskies were No. 4.

Before the season, ESPN had scheduled a game for Martin Luther King Day at 1 p.m. to fill a programming vacancy. UConn was in, and Pat Summitt’s Tennessee agreed to play its first-ever game against the Huskies after North Carolina turned down the offer.

As the season played out, UConn rose to No. 2 on Dec. 6, and a showdown between the top two teams in the poll was set for Jan. 16, 1995, at Gampel Pavilion in Storrs, Connecticut. It was the only women’s game to be played that day, and the 8,241-seat facility had been sold out since Dec. 27.

The weekly women’s poll was set to come out that Monday night – the men’s and women’s poll alternated each week between a morning and night release. Voting was delayed a day in case UConn upset Tennessee, which is what happened with a 77-66 UConn victory, so people who watched the game weren’t confused by why Tennessee was still No. 1. 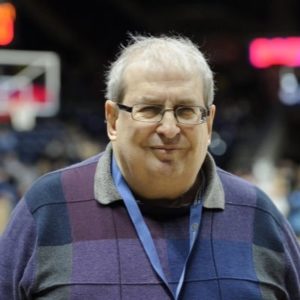 “What became the lore to this day is that game was so big that AP held up the women’s poll to get the result,” former Philadelphia Inquirer sports writer Mel Greenberg remembered.

That week’s women’s poll came out Tuesday morning for the first and only time. UConn was No. 1, remained in the top spot the rest of the season, and head coach Geno Auriemma and the Huskies won their first of 11 national championships, the most recent of which came April 5 in Indianapolis.

“How good was Connecticut? You didn’t really know at that point,” Greenberg said. “That was the Rocky vs. Creed game. At that point UConn was the Cinderella, the little guys coming up, and of course Tennessee was the existing heavyweight.”

Eighteen years earlier, Greenberg created what became the AP women’s college basketball poll ahead of the 1976-77 season at the Inquirer. The poll, which completed its 40th season in 2015-16, helped market and grow the women’s game at a time when coverage of women’s sports was minimal.

Greenberg started as a staff writer at The Inquirer in 1970 and covered mainly women’s college basketball, adding women’s professional basketball later. He’s known by many nicknames: “Mr. Women’s Basketball,” “The Guru” and “The Godfather.”

“When you’re working a game and you see Mel walk in the gym, you know that it must be a big game, a big moment because he’s here to write about it and talk about it,” ESPN’s Beth Mowins said. “That’s probably my lasting memory of Mel: You know that it’s a big deal when he’s around.”

History of the women’s poll

Greenberg didn’t buy into the idea of a poll for women’s basketball when Philadelphia Inquirer sports editor Jay Searcy wanted him to start one from scratch. With team information and schedules not readily available, Greenberg contacted the Association for Intercollegiate Athletics for Women, which ran women’s college sports until the NCAA assumed control in 1982.

The AIAW responded with a position paper: “In the middle it says, ‘Women should not get involved in newspaper games and things like polls because it will lead to the evils of men’s athletics,’” Greenberg recounted.

The poll was seemingly dead before it could even get off the ground.

Greenberg had become an overnight star before his poll launched in Nov. 1976. He covered the 1976 AIAW tournament, then a 16-team field, and correctly picked four upsets – which he compared to the four Sweet 16 upsets on Feb. 25. Newspapers and radio stations immediately requested interviews with him.

The AIAW opened up more to his poll idea when his name began to circulate. With the coaches on board, women’s sports information directors like Rosa Gatti at Villanova, Mary Jo Haverbeck at Penn State and Joyce Aschenbrenner at Pittsburgh became vital in helping to spread the word around athletic departments so Greenberg could set up a system to obtain schedules and scores.

Greenberg spent the spring and summer of 1976 speaking with people throughout the country he identified as knowledgeable about teams in that particular region. He essentially created a wire service and a news flow for women’s basketball.

Greenberg worked the telephone all day and night to contact coaches, who voted Delta State as the No. 1 team in the initial poll. Delta State was a two-time defending national champ led by 6-foot-3 Lucy Harris, who Greenberg called the Breanna Stewart of her day.

The 20-team poll launched on a Wednesday, a day Greenberg suggested to his editor because that was the day the Inquirer food section came out, and women – their targeted audience – picked up the newspaper to get the food coupons.

“It only took us all summer to get that done,” Greenberg said with a laugh. “Now we’ve got seven days to do the next one.”

After the poll launched he received more interview requests about “the Greenberg Poll,” got taken out to lunches by newspapers and got to sit alongside athletic directors on press row, including an Old Dominion game that stood out to him.

The poll reached a new level of distribution when the Associated Press picked it up in the 1978-79 season, crediting Greenberg and the Inquirer. Football SIDs, looking for any extra publicity for their school, had convinced the AP during a CoSIDA convention in the summer of 1978 that it needed to run the women’s poll.

The AP wasn’t ready yet to regularly cover women’s basketball. It ran the poll in the agate page.

The AP bought the poll ahead of the 1994-95 season, when UConn and Tennessee had their historic game. Greenberg remained active with the poll as a voter when the AP made media members, not coaches, the voters.

The 1995 meeting between Tennessee and UConn wasn’t the first time the top two teams played; there had been 25 previous 1-vs.-2 matchups and have been 30 such games since. That game had some added pop as it was the same year the AP assumed control of the poll and the NHL went on strike. The AP wrote stories on every game that had a ranked team, and papers in need of content filled their pages with women’s basketball. The poll had expanded from 20 to 25 teams in the 1989-90 season.

Before the AP took over the poll, USA Today’s coverage of women’s sports helped the poll grow. Local papers were reluctant to run USA Today content unless they were owned by Gannett. So, the local papers started pushing the AP to have local bureaus write articles.

“AP then became more intensive with it,” Greenberg said. “But even just the extra two- to three-paragraph stories pissed them off.”

Greenberg retired in April 2010 after 40 years at the Philadelphia Inquirer and continues to run his blog, Womhoops Guru.

Impact of the poll on the women’s game

The women’s poll launched four years after Title IX was introduced in 1972 to provide women greater opportunities in athletics. Greenberg’s weekly rankings helped spread the word about women’s basketball, a sport largely ignored by the media at the time and considered inferior to the men’s game.

The rankings served as signal markers for big games.

There was the Jan. 28, 1978, game between No. 12 Texas and No. 15 Stephen F. Austin. The matchup of ranked teams drew approximately 1,300 people to the game. Texas women’s athletic director Donna Lopiano called Greenberg ecstatic about the unusually high turnout.

“I said, ‘OK, Donna, here’s what we’re going to do. I want you figure out how many [attendees] you would have had without the poll, take the difference and put 50 cents on each of those numbers and give it to me,’” Greenberg said. “‘That’s your poll tax.’”

Greenberg had grown so big in stature that fans hung on every sentence he wrote. Literally.

When No. 5 Rutgers and No. 4 Virginia met on Jan. 13, 1987, Greenberg wrote in the Inquirer that it was hardly another game because “tonight’s meeting may determine who’s best in the [NCAA] East.” After the game, he spoke with Rutgers coach Theresa Grentz.

“Looking at the crowd, she says, ‘That’s all you.’ I said, ‘What do you mean that’s me?’ She said, ‘You wrote that little sentence, and every paper between your place and mine jumped on the game in promoting it,’” Greenberg recounted.

On Jan. 30, 1993, Vanderbilt and Tennessee played the first-ever in-state 1-vs.-2 game. No. 2 Tennessee pulled out a 73-68 victory against Vanderbilt, which was No. 1 in the poll that season for the first time in program history. A crowd of 15,317 packed Memorial Gym, which remains the highest attendance for a Vanderbilt home game; the average attendance for 1992-93 home games was 4,848.

Exposure of the women’s game grew as the media routinely flooded practices the day after a local team made the jump into the poll. Hearing about the unexpected surge in attendance from sports information directors early on, Greenberg started to inform the SIDs of the poll in advance so they could prepare for the media swarm.

Greenberg would send a weekly news release of the poll to SIDs, who passed it along to media outlets. In one unfortunate event – the timeframe escapes Greenberg – a Texas SID accidentally gave one week’s news release about that week’s poll to the wrong paper. The paper that was supposed to receive the release complained to AP sports editor Terry Taylor.

“She [Taylor] calls me and says, ‘Mel, I got a paper bitching down in Austin.’ She’s like, ‘Mel, you got to get these guys [SIDs] to understand because this is becoming big time. This is big-time stuff now. You got to make sure we don’t have problems like that.’

“I wanted to say so bad, ‘Can I quote you on that?’ The head of the AP saying the women’s poll is big time.”

When the poll first launched, women’s sports were normally coached by physical education professors. The rankings played a role in helping women’s coaches who found success get hired for bigger jobs and get pay raises. With more money came more men in the coaching ranks.

Greenberg said he’d jokingly ask coaches if they could give him a portion of that pay increase.

In the process of helping the sport grow, Greenberg became its historian. He remembers Kay Yow admonishing him for not keeping a history of the poll early in her tenure at NC State.

“Kay got the phone and said, ‘Mel, why are you not keeping records? Do you understand moving forward you’re our history now?’”

The poll’s history includes who was coach and what conference the team was in at the time of ranking. More recently, he’s kept a weekly updated list of teams ranked for 100 or more consecutive weeks. Tennessee fell out on Feb. 22 after 565 straight weeks in the poll, dating back to Feb. 17, 1985.

Forty years after starting his career using a typewriter, Greenberg now keeps the historical data of the poll in a Microsoft Excel document on his iPad and in the Cloud.

“It [The Poll] was crucial because without some sort of national perspective trying to identify who are the best teams and bring some national coverage to it, the sport doesn’t grow,” said ESPN’s Doris Burke, who has called women’s basketball games for nearly 25 years. “So, to me, you can look back to the first year, and say, ‘You know what, in the long view of history that’s going to be a seminal moment in the history of women’s basketball.’”