About Us Sports Journalism Blog 2016 NFL Scouting Combine Stanford’s Joshua Garnett combines character, nastiness, as he works toward the NFL

Stanford’s Joshua Garnett combines character, nastiness, as he works toward the NFL 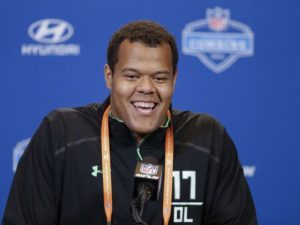 INDIANAPOLIS — He describes himself as an on-field monster.

At 6-feet, 4-inches and 312 pounds, former Stanford Cardinal guard Joshua Garnett has the size of one, too. A powerful frame and upper body strength help Garnett bury his opponents. His strong base and impressive hip torque allow him to steer defenders as he pleases, beating them early and driving them to the ground.

Add in an emphasized focus on hand placement and technique and the tape speaks for itself: let him get downhill momentum on a defender and it’s over.

“My strengths come in my ability to finish blocks and deliver blows,” Garnett said. “That’s something that a lot of teams are interested in, that aggressiveness, that nastiness. I’m going to run through (defenders’) souls. That’s how I describe it.”

Such on-field qualities are what rank Garnett third among guards eligible for the 2016 National Football League draft according to NFL.com. In light of the league’s frequent headlines related to drug abuse and domestic violence, however, there’s growing emphasis on players’ personalities away from the game.

It’s clear after addressing the media ahead of Friday’s on-field workouts at the NFL Scouting Combine that there are many ways to describe Garnett’s character.

Monstrous is not one of them.

He’s humble. Despite his status as the 2015 Outland Trophy winner as the nation’s top interior lineman, Garnett didn’t fail to point out his weaknesses in addition to his strengths.

He knows there’s room for improvement, a mindset that is crucial for any rookie.

“Something I need to work on is not being too aggressive, especially pass protection,” Garnett said. “I get caught up in locking in on a guy and taking him to the ground and that could hurt in those situations.”

He’s laughable. In a league where tough losses can haunt players for weeks, Tampa Bay Buccaneers general manager Jason Licht stressed the importance of a prospect’s ability to have a sense of humor.

“You have to be able to laugh at yourself,” Licht said. “You need to realize that you are capable of making mistakes and be able bounce back from them quickly.” 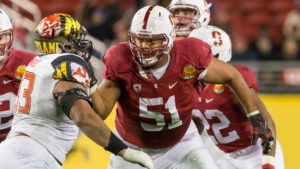 Joshua Garnett prepares to engage a Maryland defender in the Foster Farms Bowl on Dec. 30, 2014.

Before Stanford’s loss to Wisconsin in the 2012 Rose Bowl, Garnett was able to take part in the more light-hearted Lawry’s Beef Bowl, an experience he was able to laugh about in the midst of the pressure that comes with the Combine.

“I probably ate too many steaks that day,” Garnett admitted. “I ended up having a larger role in practice and in the Rose Bowl than I anticipated, so I wasn’t feeling too well. I was 312 pounds today and the weigh-in and was probably about 325 back then, so I kind of lost my eating ability.”

He’s intelligent. For a game that requires more mental preparation from its players than ever before, Garnett’s academic ambitions and degree in human biology may make him this year’s combine valedictorian.

“I worked in a cell biology lab this past summer and did a stint in an ER for some shadowing,” Garnett said. “I just love being able to see the high-intensity environment. Everyone’s working together. That is something I saw myself doing everyday with my teammates on the football field.

“The transition from football to being a trauma surgeon would be a thing where I wouldn’t have to give up my competitive nature and I’d be able to work as a member of the team and help people out. That’s something I can truly transition to.”

And he’s driven. Even as a unanimous All-American and an All-Pac 12 first-team inductee in 2015, Garnett knows he still had much to prove in Friday’s on-field workouts.

“I’m going to try and go out there and be the best at all the drills,” Garnett said. “It’s tough to think about where you’re going to go in the draft, and if you get caught up in looking at projections, it distracts you from what you’re here to do. I’m going to be sure to stick to the process and do the best I can.”

But despite all of the qualities that set Garnett apart from other prospects, he’ll still be viewed as a professional football player first. It’s an expectation that comes with playing in the nation’s most polarizing sports industry.

And in a league that’s been plagued with troubled personalities in recent months, the NFL is in need of players whose character off the field reflects their success on it.

Garnett might just be one of the best this draft has to offer.