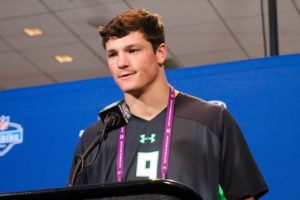 INDIANAPOLIS — If someone had said Christian Hackenberg’s draft stock would be in question three years ago, many would have scoffed.

The quarterback from Penn State had just completed his freshman season, finishing with a 58.9 completion percentage, 2,955 yards and 20 touchdown passes. He was the Big Ten’s Freshman Player of the Year, a 6-foot, 4-inch, 220-pound prototypical star who received a significant number of Freshman All-American nods in 2013.

He was hailed as pro-football’s next elusive pocket passer. An up-and-coming Peyton Manning. The next Andrew Luck. A future No. 1 overall draft pick.

“I had a great bunch of guys around me,” Hackenberg said Thursday. “A lot of older guys who (had) played, and really brought me along. The system fit great. And it was one of those things where I had an opportunity to come in and I had a guy like (Jacksonville Jaguar) Allen Robinson to throw to. Everyone has seen what he can do.

“I had a lot of people around me that made it a good transition for me, and allowed me to grow.”

But that’s who Hackenberg was. For many, this week’s National Football League Scouting Combine is about who he is now.

And the recent tapes do not play well in his favor.

After former Penn State coach Bill O’Brien left for the Houston Texans after the 2013 season, Hackenberg’s development significantly regressed during his sophomore and junior years.

His completion percentage slid three percent in 2014 and dropped all the way to 53.3 this past season. His overall quarterback rating plummeted 25 points. He threw 12 touchdown passes with 15 interceptions as a sophomore in 2014. In his final college season, Hackenberg threw 16 touchdowns with six interceptions.

While the recent teams around him included inconsistent weapons and a struggling offensive line, Hackenberg was often blamed for his decline. “A shorter deck,” Hackenberg called it, citing a roster with 43 scholarship players during his freshman season. The Penn State program had to deal with depth issues resulting from the NCAA mandated scholarship reductions in the wake of the Jerry Sandusky child sex abuse scandal.

“We had a lot of issues with the sanctions,” he said. “A lot of depth issues. We were trying to figure things out.”

The former Nittany Lion has been recognized as an inconsistent decision-maker with streaky accuracy, and with emphasis being placed on more than just a quarterback’s stature, Hackenberg’s lack of a natural feel for the game could greatly impact where he falls in the draft.

“You can tweak a player’s motion,” Tampa Bay Buccaneers general manager Jason Licht said. “If you see that a quarterback can’t throw a deep out, you can fix that through coaching. But you can’t teach comfort.”

For more than six weeks, Hackenberg has watched himself on tape, searching for the imperfections in an effort to address them all. “We were working on consistency in my footwork and in my base,” Hackenberg said. “Consistency in everything else. Accuracy. Really starting from the ground up. It has been going really well. It’s very promising.”

Comfort is an area Hackenberg has appeared to lack during the last two seasons. But the physical attributes are still there. Hackenberg has an arm capable of delivering throws with above-average velocity and strength. His toughness is unquestioned.

Such qualities are what give some coaches and general managers hope that, with proper coaching, Hackenberg can be the future of their franchise.

An example of such proper coaching can be found in Houston, where O’Brien, Hackenberg’s former coach, may be looking to fill the void at the Texans’ quarterback position.

“It’s a great opportunity,” Hackenberg said, when asked about O’Brien. “But at the end of the day, I’m here just trying to be the best prospect that I can be, and impress as many football teams as I can.”

Regardless, it’s clear Hackenberg isn’t who he once was, and this week’s combine may or may not change how his future is perceived.

“(Combine results) are just numbers,” San Francisco 49ers general manager Trent Baalke said. “We try to take a look at what the numbers are, but if we put on the tape and the numbers aren’t there, they don’t matter.”

Hackenberg is here to change any negative perceptions. He can hope that the success of his freshman season success is seen as compelling evidence that his promise will help him improve in the future.

But for now, this week, that hope is his best hope.

“I think adversity really shapes who you are,” Hackenberg said. “Success is easy to roll with, but how you respond to adversity is huge.”