About Us Sports Journalism Blog 2021-22 College Football Playoff National Championship For Cincinnati’s Fickell, An Award To Take Back To His Team

For Cincinnati’s Fickell, An Award To Take Back To His Team

INDIANAPOLIS — University of Cincinnati head football coach Luke Fickell will be the first to tell you he doesn’t enjoy awards.

For Fickell, the worst day of the year is when the first-teamers are named by the American Athletic Conference. Fickell has built his program on the motto of “together everyone achieves more,” and feels individual recognitions can take away from the goals and accomplishments of the teams as a whole.

However, on Saturday Fickell made a slight exception, as he was awarded the Eddie Robinson Coach of the Year award by the Football Writers Association of America and the Allstate Sugar Bowl.

Standing behind the bronze bust of the late Hall-of-Fame football coach from Grambling State University, Fickell expressed his gratitude for the honor.

“To have your name even mentioned any bit in the same realm, or the same breath, of Eddie Robinson is, for me, something that is quite humbling,” Fickell said. “I never look at myself in any way of being able to measure up to what a lot of other people have done – I don’t try to worry about that – but just to be named and recognized with coach Robinson is truly humbling.”

Rather than claiming the honor for himself, Fickell said the award goes to his seniors and coaching staff.

“This award is for our entire program, for our entire university and most importantly it’s for our 34 seniors that have done some amazing things for me and my family, our program, and our university over the last five years,” Fickell said. “Because of them I can stand up and say thank you. Because of them I can take this award back and basically give it to them and ‘We told you what we can do when we don’t worry about who gets the credit.’”

Fickell led the Bearcats to their second-straight undefeated season in 2021, which included a win at No. 5 Notre Dame, helping the program become selected to its first-ever College Football Playoff Semifinal. Not only were the Bearcats the only undefeated team in the country in the regular season, but Cincinnati was the first program to qualify for the Playoff outside of a “Power 5” conference since the postseason tournament format started in 2014.

In the Cotton Bowl Classic on New Year’s Eve, the Bearcats’ season came to a close after a 27-6 loss to Alabama, which will face Georgia on Monday in the National Championship at Lucas Oil Stadium. The Bearcats had a ranking as high as No. 2 in the two major polls this season, and finished with a record of 13-1.

In his five years at Cincinnati, Fickell has won the AAC Coach of the Year three times and has an overall record of 48-15.

Prior to Fickell’s speech, Eddie Robinson III and his son Eddie IV, representing the family, took to the podium to present the award named after their grandfather and great-grandfather. Robinson III said he was a fan of Fickell, and rooted for his program during the season.

“I can certainly say that coach Luke Fickell is more than deserving of this coach of the year honor and his season was one for the record books,” Robinson III said. “Coach, I think the Cincinnati Bearcats program has positioned itself for continued college football greatness.” 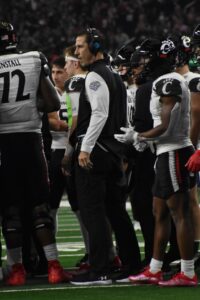 Illinois, Jim Harbaugh of Michigan, Billy Napier of Louisiana, Pat Narduzzi of Pittsburgh, Kalani Sitake of Brigham Young, Jeff Traylor of the University of Texas at San Antonio, Mel Tucker of Michigan State, Kyle Whittingham of Utah and the coaches facing off Monday: Nick Saban of Alabama and Kirby Smart of Georgia.

While Fickell refused to make a prediction on the final score, he said he expects Monday’s championship to be a good one.

“I think the first half will be a heavyweight fight,” Fickell said. “I don’t think it will be as exciting as you might want to see with bombs and touchdowns and things like that. I think it will be a kind of a slugfest back and forth. I think there will be a lot of adjustments made at halftime and we’ll see a different second half where things might open up a little bit more.”

The FWAA has chosen a Coach of the Year since the 1957 season. The award honors Robinson, whose legendary career spanned 57 years starting in 1941. During his time at Grambling, Robinson’s teams won 408 games and won or tied for 17 Southwestern Athletic Conference championships. The Tigers also won nine Black College Football Championships.

During his speech, Fickell said he doesn’t like the term “Power Five,” with its suggestion that other conferences are inferior, and he believes Robinson would feel the same way.

“I’m sure Coach Robinson had the same thing: It didn’t matter which school you were at, it didn’t matter what conference you were in, it’s about lining up across another man and challenging yourself at the highest level,” he said.

Fickell concluded that while the means of communicating with players has changed over the years, the core of coaching hasn’t.

“They still want to be coached, they still want discipline, love and guidance,” Fickell said. “Coach Robinson figured out how to do that over a 50-year span.”