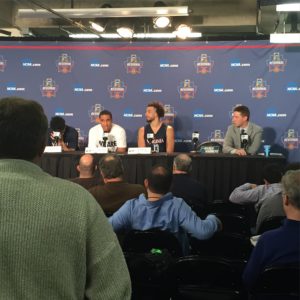 CHICAGO – On the surface, Friday night’s Midwest regional semifinal matchup between the Virginia Cavaliers and the Iowa State Cyclones represents a clash of two polar opposite playing styles.

The top-seeded Cavaliers boast one of the nation’s stingiest defenses and most patient offenses. Virginia’s scoring defense ranks third in the country, with an average of 59.5 points allowed per game. Offensively, Virginia’s average offensive possession lasts longer than 20 seconds according to basketball statistician Ken Pomeroy.

Iowa State’s basketball methodology could not be more different. The Cyclones employ the 14th-ranked offense in the nation, averaging just a tick over 82 points per game. The team has six players averaging double figures in scoring and has the second-best shooting percentage out of teams left in the tournament. Defensively, no other Big 12 unit gave up more points this season than Iowa State. The team concedes a rather porous 74.7 points per game.

The question, as always when two contrasting tendencies collide, is which playing style will prevail? Which team will be able to dictate the game’s pace?

Iowa State head coach Steve Prohm said, in a way, the game could be called a “litmus test.”

Virginia head coach Tony Bennett does not expect either side to totally change their approach.

“Well, I don’t think you’re going to reinvent yourself at this stage, and I told our guys, it’s going to have to be our best against their best,” Bennett said.

Iowa State senior forward Georges Niang noted the key to disrupting Virginia’s tempo will be taking away its offensive options as the Cavaliers run their ball reversal offense. If passing lanes are blocked and catches denied, Niang thinks the Cavaliers will get sped up and out of rhythm.

Despite these apparent clashing differences, upon taking a closer look at the matchup, there are some striking similarities between the sides.

Both teams are led by senior standouts, each considered one of the most successful players in the history of each program. Both are guided by efficient and consistent table-setting point guards. And both are trying to redeem Sweet 16 heartbreaks from 2014.

On the Virginia side, Brogdon is considered one of the best players in all of college basketball. The 6-foot-5 senior is also a two-time All American, and this season he was awarded both Atlantic Coast Conference Player of the Year and Defensive Player of the Year honors. Brogdon averages 18.6 points per game and has started 106 consecutive games.

Iowa State’s point guard Monte Morris boasts one of the best assist-to-turnover ratios in the country at 4.45 for his career. Steady and methodical, Virginia floor general London Perrantes has amassed 431 assists in three seasons, good for seventh all-time in school history.

Finally, both teams came up short at this stage in the tournament a few seasons ago in 2014. In a game where the Cyclones played without Niang due to a broken foot suffered earlier in the tournament, Iowa State lost to eventual champion Connecticut at Madison Square Garden. On the very same night on the same floor, Virginia lost to Michigan State by two.

Two years later, both teams sense a golden opportunity. Virginia’s nemesis over the past two tournaments, Michigan State, was eliminated in a shocking first-round defeat. And Iowa State returns to the Sweet 16 this time with a healthy Niang.

In the end, regardless of differences or similarities, one team will earn a shot at the Final Four with a victory Friday night at the United Center.