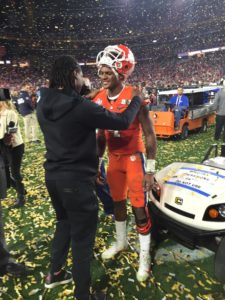 GLENDALE, Ariz. – Clemson quarterback Deshaun Watson dodged cameras and confetti as he worked his way through the packed postgame field. He sought out Alabama’s Jake Coker, Bo Scarbrough and Da’Shawn Hand, among others. He heard a common refrain from the Crimson Tide players: We’ll see you again here next year.

That’s the plan for the Tigers, who came within a few plays of their first national title since 1981.

There were no visible tears in the locker room after the Tigers lost a 45-40 thriller to the Alabama Crimson Tide in the College Football Playoff National Championship presented by AT&T. The players were upset they lost, but their attention immediately shifted to being back on the same stage next year.

“We’ll learn from it and get back to work,” Watson said. “We got to grind harder. We came up just a few plays short. We’ll be back. Just keep our heads held high and keep motivated and keep grinding.”

The Tigers had set their sights on 15-0 since preseason camp. Head coach Dabo Swinney gave the team T-shirts that said ‘15 for 15’ on the back. He often spoke about printing and selling 15 tickets.

The Tigers made it to that 15th game a year earlier than most outside the locker room believed. At 14-0, they were doubted about their ability to hang with Alabama, but they did just that. The Tigers went punch for punch with the Crimson Tide. They showed they belonged.

“I’ll remember this for the rest of my life,” said junior defensive end Shaq Lawson. “We fought hard to the end, so we got to hold our heads up. We accomplished a lot of special things this season. It’s a special season for us. Just hated it ended this way.”

This season’s team helped lay the foundation for the future. But how do the Tigers make sure they’re not a one-and-done deal? Offensive lineman Eric Mac Lain said carrying over the winning culture and keeping the fire and desire to improve could make this team dangerous.

“I think that we have a bunch of winners on this team,” Mac Lain said. “We have a bunch of guys who know how to win, expect to win. If you lose that, if you question yourself at any point, that’s when your culture can slip a little bit. I don’t see that happening. The guys are going to remain confident, and they’re already focused on Auburn.”

Clemson has gone from a perennial top-25 team to a national-title contender, and Swinney had no doubt Clemson will be playing for the national championship again soon.

“Our team is built to sustain success,” Swinney said. “We’ve got the right ingredients from a toughness standpoint, talent standpoint, and then just, again, the will to win and the culture that we have in our program.”

Players will have to decide within the next week if they’re going to enter the NFL draft. They’ll look over draft grades and speak with their families and coaches. But losing when they came so close could fuel players to return, especially with the talent they have at quarterback.

Watson completed 30 of 47 passes for 405 yards, with four touchdowns. He was Clemson’s leading rusher with 73 yards. He became the first-ever FBS player to throw for at least 4,000 yards and rush for at least 1,000 yards in the same season. He, along with Stanford’s Christian McCaffrey, will be a preseason Heisman favorite. Personal accolades aside, Watson is ready to get back to work and win a title with his teammates; he said that wouldn’t be any different had they beaten Alabama.

“If I would have won it [the national championship], I still would have had that determination to come back and win it again,” Watson said. “The bond is still going to be close. We had a tight bond from the get-go, win or lose. A lot of guys are sad and disappointed, but at the end of the day you learn from it.”

After the game, Mac Lain spoke about former Tigers linebacker Stephone Anthony, who said “Clemson is coming” when he committed in 2011.

“Well,” Mac Lain said, the senior standing in front of his locker for the last time, “Clemson is here.”