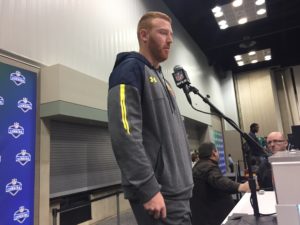 The redshirt senior Central Michigan quarterback is working on finishing his master’s degree in sports management. He’s already finished his bachelor degree in actuarial science with a 3.86 grade point average. In November Rush was named a finalist for the William V. Campbell Trophy, the annual honor awarded to college football’s top scholar-athlete.

In other words, if the football thing doesn’t work out, Rush has a rock solid backup plan.

“I’ve got a real good degree I can fall back on,” Rush told reporters at the National Football League scouting combine on Friday. “I can take that into finance or I can go straight into the actuary field. I haven’t thought too much about it. The goal’s not to use it yet.”

That’s right because Rush can put his brains to use when it comes to football, too. His ability to study film and his understanding of the intricacies of the game are points of pride for the Chippewa prospect. The NFL combine website describes Rush as a “juggernaut in the film room.”

As a combine participant, Rush has had the chance to impress NFL personnel with his smarts in interviews.

“I got to talk a lot of x and o’s with those guys,” Rush said. “I’m real confident in that area. I thought I portrayed that well. I pride myself in having a lot of knowledge about the game.”

But don’t be fooled, Rush isn’t just a football nerd. He’s at the combine after all. The cerebral signal caller put up eye-popping numbers on the field during his four years at Central Michigan. He started in nearly every game of his college career tallying 12,891 yards, only 12 shy of the all-time Mid-American Conference record held by Chippewa-great Dan LeFevour. He threw for 90 touchdowns in four years and was named second-team All-MAC as a junior and third-team All-MAC as a senior.

Despite his impressive statistics in the classroom and on the field, draft evaluators have their reservations when it comes to Rush’s physical attributes.

Detractors complain about a lack of arm strength, worrying that some throws that worked in the MAC would have been interceptions in the Southeastern Conference.

And there have been misgivings about Rush’s physical dimensions. The NFL combine website describes the quarterback as having a “frumpy body with very little muscular definition.” And Rush’s hands qualified as tiny at 8 ¾ inches when measured at the East-West Shrine Game in January.

This week at the combine, the ultimate football evaluation event, Rush is ready with responses to these challenges.

The hand issue? With some help from the internet, Rush took care of it.

“I looked up a YouTube video of like hand stretching, just random, like for people that type a lot,” Rush said. “And so I did that. And it does — it helps it feel better and it worked.”

Rush’s hands were officially measured at 9 1/8 inches here at the combine.

“They say under nine-inch hands is a bad thing,” Rush said. “It was nice to see the nine on there.”

Regarding the body-shape critique? Rush isn’t having it.

Rush was officially measured at the combine at six feet, three inches and 228 pounds. And Rush will have a chance to flex his muscles and prove doubters wrong on the bench press on Saturday.

Finally, with regards to his throwing ability, Rush is excited for the chance to get on the field and show the NFL people what he can do. The NFL people are eager too.

“They just want to see me throw tomorrow,” Rush said. “Really show the physical tools. They like my mental side of the game, but now I just need to show them that I can make all the throws.”

Most projections have Rush pegged as a seventh-round draft pick or an undrafted free agent.

Rush has proven he has what it takes mentally. Tomorrow he can make a statement about his physical abilities.