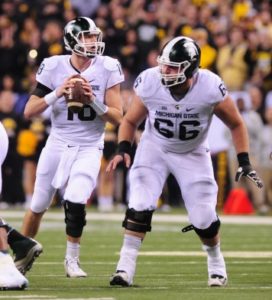 DALLAS – In normal circumstances throughout Michigan State’s remarkable football season, the first player to touch the ball for the Spartan offense has been nationally recognized for his accomplishments on the field, in the classroom and as a prominent leader of his unit. No, not quarterback Connor Cook, but center Jack Allen.

Throughout his career, the single-minded leadership of the four-year starter and two-time first-team All-American has made an impact on the Spartan offense. Allen, a 6-foot-2, 296-pound fifth-year senior, became the third offensive lineman in Michigan State history to twice become a first-team All-American, joining Dave Behrman in 1961-62 and Tony Mandarich in 1987-88.

But as the Spartans’ season reached its frantic, exhausting, defining moment – the 22-play, 82-yard game-winning drive that defeated Iowa in the Big Ten championship game on Dec. 5 – Allen was conspicuous by his absence over the ball. He had been one of seven offensive linemen to be part of the drive. Now, with time running out and the margin of error shrinking rapidly, Allen was replaced at center by junior Benny McGowan. Allen was lined up in the backfield, in a spot offensive line coach Mark Staten referred to as the fullback Z position, where Allen would become a punishing extra part of the surge.

Or a very imposing decoy.

“(Allen is) kicking out or he’s blocking in or he’s a false key where they say, ‘Oh, he’s over here and we are gonna run the ball this way,’” Staten said.

Allen went in motion, but freshman running back LJ Scott did not follow him. The play worked – barely – for the 1-yard touchdown that ended the 9-minute, 4-second drive that advanced the Spartans to the College Football Playoff Semifinal here on Thursday night. In the weeks that would lead to Michigan State’s Semifinal appearance, as the drive quickly took its place in Spartan history, the traits that led Allen to help build a committed foundation wound up in an unexpected spotlight. The Chicago area prospect that was not offered a scholarship by Illinois or Northwestern was at the center of his team’s success.

Allen was a semifinalist for the National Football Foundation’s William V. Campbell Trophy for the leading scholar-athlete in major college football. He was named Academic All-Big Ten four times.

“He’s a good guy, you know, he’s really a team first guy,” Staten said. “He’s the oldest of three brothers so he’s already had those leadership things entrusted in him by his parents. And sometimes it was reluctantly but sometimes, you know, in pushing him for a while like, ‘Hey, we go as you go,’ because he is that tough, almost that boxer, that fighter, that wrestler that he once was and we go as he goes. So with his toughness, his attitude, with his ability to visualize and see to communicate, we come and go as an offense.”

Allen’s younger brother Brian, a sophomore left guard, explained his sibling’s success. “He has always been a leader, I think, since he has gotten to Michigan State,” Brian Allen said. “But it was (not) really until this year and last year that he started vocalizing it, pushing other guys in the right direction. He has always made guys in our (offensive line) room better players. But I think this year he has really taken it upon himself to make the whole team better, and try to reach out to everybody.”

From the young tailbacks all the way up to head coach Mark Dantonio, the team has noticed the initiative.

Allen traces his leadership qualities back to those wrestling days at Hinsdale Central High School.

“It (wrestling) teaches you a lot of things that a lot of other sports can’t, like you can’t blame anything on anybody else,” Allen recalled. “If you lose you can’t say so-and-so dropped that catch or and so-and-so missed that tackle. In wrestling it’s on you. You can’t point the finger at anybody else because you lost.”

Dantonio cited Allen’s balance of commitment and sense of humor.

“His mentality, his football toughness, he knows how to have fun, keeps it light but very hard worker, very tough,” Dantonio said. “His wrestling background at Hinsdale Central allows him to, I think, grow as a football player because of the toughness aspect and all the things he went through as a wrestler in his program. But he came here as a guy that immediately stood out in terms of toughness, effort, very quick learner. Again, he’s been in the system four, five years here. So he has done a tremendous job for us.”

Allen used this success and experience to help his teammates grow.

Allen’s leadership takes a brotherly approach, especially to younger teammates such as running backs Scott, Gerald Holmes and Madre London. He looks out for them, but at the same time isn’t afraid to call them out on their mistakes.

“Jack will get on you before anybody else does,” said Holmes. “You do something wrong and he is the first one to say something. It’s all love from Jack, you know, he’s a good guy and the best lineman I will probably ever run behind along with everybody else. He’s a good dude.”

Like family, Allen’s role can be part protector, part arbitrator.

“He’s one of those guys when somebody like a young running back and young lineman get into it, he’s one of them guys that step in and says, ‘Okay!’” explained junior running back Delton Williams. “He’s been though stuff like that like with Jeremy Langford and other guys, but he’s basically got a feel for it already. Even when people get into it on the field he gets into the middle of it and tries to stop it and basically say, ‘It’s going to be all right,’ and calm us down and move forward and get the win.”

Allen’s actions both on and off the field are what speak to the players most. They see him performing at the top of his game, working hard every day on the field. They also see him helping his teammates and developing a trusting friendship with them. His selfless attitude and emphasis on teamwork helped build this team and will continue to impact it for years to come.

“He leads by example,” London said, “…You’re gonna want to follow him and do the same thing.”