INDIANAPOLIS — It is hard to say if the football coaches at Iowa State University knew all that they were getting when they recruited Charlie Kolar back in 2017. The young tight end, recruited by Matt Campbell and his staff, appears to be destined for greatness.

Iowa State was not Kolar’s first pick. With both parents working as professors at the University of Oklahoma, Kolar was an avid OU fan from a young age, dreaming of one day playing for the Sooners. When that possibility did not develop for Kolar, the Cyclones had an opportunity to snatch an elite-level achiever.

“If my worst cross to bear is that I didn’t play in my hometown university, I lived a pretty good life,” Kolar said at the National Football League Scouting Combine. “I can assure you I am grateful for what I have.”

Kolar finished his collegiate career setting the school’s tight end record for most receptions (106), career receiving yards (1,425), and career touchdowns (17). He is the only player in the history of the school to be named All-American and Academic All-American.

Kolar remains humble about the Campbell Trophy. “It’s an incredible honor,” he said, “but I am just a by-product of all the people who have helped me along the way.” 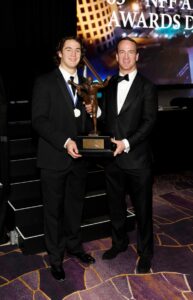 Maintaining the level of success, both academically and athletically, has not come easy. “You just got to do things you don’t want to do now,” he said, “so that you can do the things you want to do later.”

Now Kolar, who is seen as one of the leading tight ends in the NFL Draft, can focus on football as he experiences the Combine process and prepares for the continued scrutiny to follow.

Projections suggest he could be drafted as early as the second round, with teams including the Tennessee Titans, Los Angeles Chargers and New York Jets looking for help at the tight end position.

Trey McBride of Colorado State and Jalen Wydermyer of Texas A&M are among the leading tight ends. Kolar remains confident, with what he calls an “earned confidence.” When questioned about the attributes he plans to bring to an NFL franchise he said, “I am really versatile. I think I have great routes, great ball skills, can really make a play with the ball in my hands, good blocking, just a complete tight end. I want to show (the NFL) that I am more of a complete tight end.”

Kolar earned his chance to prove it by making an impression at the Combine this week. His elite-level academic success will create opportunities in the future. For now, the goal is to succeed on the field next fall. “I try to put all my effort into things I am doing right now,” Kolar said. “I love football and I am going to try to play for as long as I can.”