INDIANAPOLIS — As a high school quarterback dreaming of one day making it big, Georgia’s Stetson Bennett IV was aware of his strengths, the areas of his game that needed improvement, and the weaknesses that scouts and teams couldn’t easily overlook. On the shorter side for a college football hopeful, the 5-foot-11, two-star recruit began wearing a postman’s hat to football camps to stand out from the crowd.

After Monday night, the postman hat – and any other attention-grabbing machinations – can safely be stowed away. Bennett won’t need them anymore.

The redshirt senior quarterback captained the Georgia Bulldogs to a 33-18 defeat of the Alabama Crimson Tide for the 2022 College Football Playoff National Championship on Monday, ending a 41-year national title drought and bringing glory back to Athens. Named the Offensive Player of the Game, Bennett finished what could be his final effort in a Bulldogs uniform completing 17 of 26 passes for 224 yards and two touchdowns.

“Five years ago he was delivering passes like Baker Mayfield against the scout team,” Georgia coach Kirby Smart said. “There’s a lot of guys that saw him on the scout team make plays with his feet, his arm whip and decision making, and we were very impressed. But again, to think that it would come this far from that National Championship he was a part of there to this one, man, what a story.” 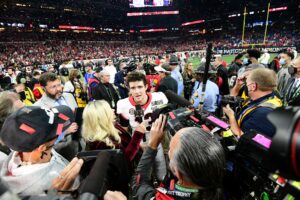 Though Georgia’s legendary defense certainly did its part in Monday’s win, limiting Alabama to only 30 net rushing yards – with Alabama’s Heisman-winning quarterback Bryce Young finishing with minus 43 rushing yards – the Bulldogs were buttressed by catalyzing plays from several of their younger, under-the-radar stars.

Freshman wide receiver Adonai Mitchell, who finished with one touchdown on two catches and 50 receiving yards, pulled in the fourth-quarter touchdown pass that gave the Bulldogs a 19-18 lead and noticeably shifted the momentum in their direction. Redshirt freshman defensive back Kelee Ringo capitalized on that momentum shift with a game-sealing, 79-yard pick-six – the longest ever pick-six return in a national championship game.

“That’s what this team has been, a collective group of people stepping up when they’re needed,” Smart said.

Despite the late-hour heroics from Bennett and the Bulldogs, Monday’s title game started slowly. Alabama entered halftime with a 9-6 lead, with both teams scoring solely through field goals. Monday marked the first time the first five scores of a game came via field goal since the 2011 rematch between the LSU Tigers and the Tide.

Georgia and Alabama hunkered down defensively in the first half, allowing only 15 total first downs. Georgia finished the half with 153 offensive yards and went 3 of 8 on first down conversions; Alabama finished with 216 offensive yards, converting just three of nine third-down situations.

Ultimately, it was the confluence of Smart’s prolific coaching mind, the Bulldogs’ unwillingness to crumble and Bennett’s refusal to let his national championship dream die that sealed Georgia’s destiny. The Bulldogs scored a late third-quarter touchdown after a four-play, 80-yard drive that spanned only 1:58 seconds, taking a 13-9 lead.

A controversial early fourth-quarter Georgia fumble almost derailed its quest for greatness, but the Bulldogs battled back, doubling their points in the fourth and mostly stifling the Tide. Defensive back Lewis Cine was named the Defensive Player of the Game.

“I mean, I knew that once I fumbled the ball I was not going to be the reason we lost this game,” Bennett said.

“I knew that those guys beside me had my back, and I had their back, too.”

With the championship game victory, Bennett improved to 14-3 overall as a starter and 11-1 this season. Georgia’s win snapped a seven-game losing skid against the Tide that included three SEC Championships and one national championship.

“Bama is a world-class caliber team… but we knew that Bama has always been at the top,” Cine said. “And to beat the team at the top is something really surreal. It’s something that goes down in history and something that I’ll remember forever.”

While Monday’s win is sweet for the entire Georgia faithful, the championship glory is particularly saccharine for Bennett.

In 2017, the redshirt senior quarterback – who skipped out on a full-ride offer to Southern Mississippi to become a walk-on at Georgia – joined a loaded Bulldogs squad that included starting quarterback Jake Fromm and backup quarterback Jacob Eason. He manned the scout team quarterback position as a freshman and redshirted after not seeing any in-game action during the season.

Bennett left Georgia after a disappointing freshman year, enrolling instead at Jones College in Ellisville, Mississippi. He impressed in his single season at the junior college, leading the Bobcats to a 10-2 record, a Mississippi Bowl win and a Mississippi Association of Community & Junior Colleges championship game appearance.

But the Georgia native had unfinished business in Athens; one dream remained that he refused to relinquish.

“Am I trying to play some kind of savior by winning a national championship for millions of people? No. I don’t think that’s my job,” Bennett said in a press conference one week before the championship game. “My job is to go out there and throw completions to very talented people we have on this team. And I think it’s as simple as that.”

Bennett returned to Georgia in 2019 and found his footing as a junior, competing in five games that season and throwing for two touchdowns with an additional rushing touchdown.

Last season, he started five of Georgia’s ten games and finished the season as its top quarterback. Now, after a championship season that ended Georgia’s title drought and solidified this season’s squad in the college football record and history books, the walk-on quarterback has finally reached the pinnacle of college football that he’s been working toward since 2017.

“And what me and [Lewis Cine] and everybody else, all of the players in this program have went through in the past since the [2018 national championship loss] has gotten us to this point,” Bennett said.

“And you always wonder why we are doing this. And this is why.”