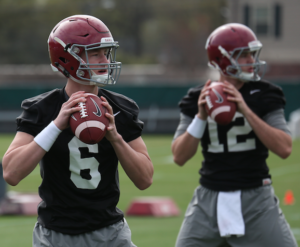 ARLINGTON, Texas — Alabama backup quarterbacks David Cornwell and Blake Barnett have a job that comes with a bounty of bumps and bruises. As Alabama created a path to the College Football Playoff Semifinal against Michigan State, Cornwell and Barnett have spent time at practice running the offense for the Crimson Tide scout team, recreating the strengths of the next opponent, enduring collision after collision with the violent Alabama defenders.

“They’re such a force of a defense, and, you know, we’re with the scout team so it’s obviously a serious challenge,” Barnett, a 6-foot-5 freshman, said at AT&T Stadium on Tuesday.

“You’re talking about one of the most dominant defensive fronts in the nation,” said Cornwell, a 6-foot-5 redshirt freshman. “Going against them every day, that’s awesome. Moving around in the pocket, they let you throw it. But they can get there whenever they want. It’s crazy.”

This is how crazy: The problem with recreating the talents of the opposing quarterback, including Michigan State senior Connor Cook – like stunt doubles for a famous actor — is that the Tide scout team has to deal with the size and enthusiasm of the Alabama defensive starters.

“They are massive,” Cook said, his eyes widening as he repeated the observation multiple times this week.

Kirby Smart, the Alabama defensive coordinator, said that unlike other units he has coached, the defensive linemen are eager to hit the opposition in practice. When Barnett is guiding the scout team, Smart said of the defenders, “they have to peel them off him.”

Opponents have to contend with the Tide defenders once. Cornwell and Barnett face a constant, unforgiving challenge. The Alabama defense has more sacks this season (46) than any Alabama team in Nick Saban’s nine seasons. Since 2009, the 137 touchdowns allowed by Alabama’s defense are the fewest in the nation. This season, the Tide have allowed an average of just 74 rushing yards.

Cornwell’s relative obscurity conceals his link to greatness – his number 12, worn by Tide quarterbacks Joe Namath, Ken Stabler, Pat Trammell and Greg McElroy, among others. Friends of Cornwell’s parents, as a high school graduation present, gave him a Namath helmet that he keeps in his room. Cornwell remembered the challenge: “Kind of like, hey, here’s what you can live up to,” he said. “This is a great reminder of all the legends who have worn this. Just kind of pushing you: Don’t let number 12 down.”

Despite the lack of attention and the punishment they endure in practice, the scout team quarterbacks recognize their value to the team and the chance to improve their skills.

“It’s challenging, but I think it’s definitely made us both better,” Barnett said at Media Day as he sat on the sidelines. Few media members were interested in talking with him. “Being able to learn different offenses on a daily basis just based off of looking at a card, and you’re running the play, it definitely involves a lot of getting yelled at, you know, kind of adapting as you go, but it’s definitely helped me learn a lot.”

That type of improvement is something that offensive coordinator and quarterbacks coach Lane Kiffin has noticed in many of the Alabama quarterbacks, saying the biggest growth for many of these players occurs between year one and year two of their time with the Crimson Tide.

“It’s a really good challenge for them, and it develops them because they are going against one of the best defenses in college football every day,” said Kiffin. “But it’s also humbling for them too because these kids come here as four or five-star recruits, some of the best players in the country, and now they’ve got to go be on the service team, so it’s very valuable for them.”

To see just how far that value stretches, Barnett and Cornwell don’t need to look far. Their mentor, Alabama senior starting quarterback Jake Coker, was in a similar position as a backup quarterback for four years, first at Florida State and then with the Crimson Tide.

“It takes a little bit to get used to, especially right out of high school,” said Coker. “You’ve been used to playing and being the guy, but it’s one of those things. Everybody goes through it except for special cases, and it makes you better, makes you realize how special it is to be the starter and to be able to play.”

Coker is 12-0 as a starter for the Crimson Tide this season, with his lone missed start coming against Ole Miss, the team that handed Alabama its only loss of the season.

“It’s nice to look up to him,” Barnett said of Coker. “He’s definitely been around for a while so he completely understands everything.”

Coker also understands what it’s like to be out of the spotlight. His game isn’t flashy, and his statistics this season – 17 touchdowns, eight interceptions and a 65.4 percent completion rate — are often overlooked behind the numbers of his Heisman-winning running back Derrick Henry and the hard-nosed Alabama defense.

But Coker, like Cornwell and Barnett, isn’t bothered by his role on the team. He’s simply focused on doing his job.

This season, that included gaining respect from his teammates, an obstacle Kiffin says Coker was able to accomplish by his physicality in practice.

“The way that he ran guys over,” Kiffin said. “He didn’t slide. He didn’t run out of bounds. To win those defensive players over, well what wins them over is to play like them, and he plays like a linebacker so definitely that’s how he won this team over.”

Coker earned the respect of his teammates by working hard, even when he wasn’t at the top of Alabama’s depth chart. Now, Barnett and Cornwell are trying to do the same thing.

“I think both of them take a little punch here and there,” Coker said about Barnett and Cornwell. “It’s not too fun. I know that part.”

And as for who gets the hardest hits, there’s no debate between Cornwell and Barnett about that.

“Blake is a shifty guy, he likes to run,” said Cornwell. “Sometimes the big guys don’t like that, and they go gash him. They like to show him they’re there, especially with Blake.”

Barnett adamantly agrees, saying, “That’s completely true. Being the fact that I have to run sometimes, it’s kind of fair game from that point on so they don’t have a problem hitting me, and it doesn’t bother me really. I mean, it’s football.”