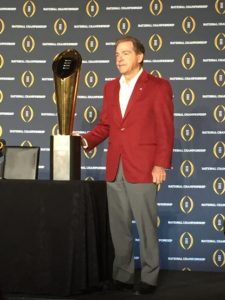 SCOTTSDALE, Ariz. – In the crimson afterglow of a fourth national championship in seven seasons and the fifth in his career overall, Alabama coach Nick Saban thought of a far more humbling experience. He remembered a moment he shared with former Nebraska head coach Tom Osborne following the conclusion of the second game Saban coached at Michigan State.

Early in that 1995 season, with Michigan State on the way to a 6-5-1 season and Nebraska headed for a national championship, what Osborne told him at midfield soon after a 55-14 defeat never left his mind.

“I’m saying I may never win a game as a college coach,” said Saban. “And I remember running across the field and Tom Osborne, he said, ‘You’re not as bad as you think.’”

Osborne’s words of reassurance taught Saban that getting caught up in wins and losses can be a dangerous mind game.

In winning his fifth title, Saban joins an elite club with just two members, current and former coaches of the Crimson Tide. The late Paul “Bear” Bryant won six championships as the head coach of the Alabama Crimson Tide from 1958 through 1982.