ARLINGTON, Texas –When the clock in AT&T Stadium hit zero, people across the nation were patiently waiting to start their midnight celebrations, but Alabama’s celebration had already started.

Since the first day of 2015, after a College Football Playoff Semifinal loss to Ohio State, Alabama has been on a mission. As the final minutes of the year ticked away, they celebrated taking the next step on that mission — a 38-0 victory over Michigan State in the 80th annual Goodyear Cotton Bowl Classic.

Alabama (13-1) advances to a meeting with undefeated and top-ranked Clemson, which defeated Oklahoma in the Orange Bowl. The Crimson Tide will play for the chance to win a 16th national championship in program history and the fourth in a span of seven seasons.

At the end of an understated night, Heisman winner Derrick Henry, who ran for 75 yards and two touchdowns, trekked across the field calmly and methodically — like a determined man on a scavenger hunt — searching for teammates to embrace.

Players jumped in the air, celebrating amidst the sea of people that had flooded the field. The rainbow-colored confetti poured down like a blizzard on to Jake Coker, the Alabama quarterback and winner of the Sanford Trophy as the Outstanding Offensive Player. Coker completed 25 of 30 passes, a completion percentage of .833 that is second in the history of the Classic to the .917 percentage of Bobby Layne of Texas in 1946. Coker’s 286 passing yards were a career high. 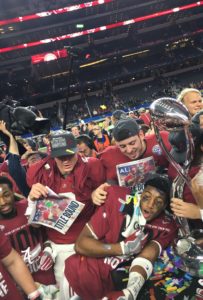 Alabama players strewn in confetti celebrate on the field at AT&T Stadium in Arlington, Texas, following their 38-0 rout of Michigan State in the College Football Playoff semifinal. The Crimson Tide will play No. 1 Clemson in the College Football National Championship game on Jan. 11 in Glendale, Arizona. (Photo by Jessica Wimsatt)

Eventually, the players gathered together around the Field Scovell Trophy, a cluster of smiling faces and confetti-speckled crimson jerseys.

“I’m really, really proud of our team,” said Alabama head coach Nick Saban after his team’s New Year’s Eve win. “I think last year we came to this game, we were happy just to take part in the game. I think this year we wanted to sort of take the game.”

That’s just what they did.

“The whole time we were here, it was total focus on winning the game,” Saban said. “It wasn’t a bowl game to go have a good time. It was we want to play well in this game, and I certainly think we did.”

Alabama’s 38-point victory was the most decisive shutout and third-largest point differential in Cotton Bowl history. Henry’s 75 rushing yards gave him a season total of 2,061. He became the 25th player in NCAA history and 19th player in Football Bowl Subdivision history to rush for 2,000 yards in a single season. Henry scored on runs of 1 and 11 yards to extend his touchdown streak to 19 games, the longest active streak in the nation and the longest in Alabama history.

On defense, Alabama was a formidable force. The Tide defense held the Spartans to only 29 net rushing yards, an average of 1.1 yards per rush. Senior defensive back Cyrus Jones, whose interception near the end of the second quarter changed the direction of the game, and whose 80 punt return yards ranks third in Cotton Bowl history, received the McKnight Trophy as the Outstanding Defensive Player.

But despite the pride and excitement surrounding the Crimson Tide victory, Alabama made sure to set the record straight after the game — this win is just a step towards their ultimate goal.

“I’m happy, but I’m not really happy, you know, until the ultimate goal ends the season,” junior defensive end A’Shawn Robinson said after the game. “I mean it’s great to get this win, but it’s also the starting point to focus on the next game.”

There is only one result that will meet Alabama’s expectations.

“We’re going on to the championship,” Coker said on the field after the game, “and we’ve got to win that game.”

That same feeling was echoed in the postgame locker room.

“As soon as we came in the locker room, Coach started talking about Clemson, like, we’ve got to start getting ready for them,” said junior linebacker Tim Williams.

“We leave tomorrow at 8:30 to get back to school,” he continued, “then we’ve got to start watching film on Clemson.”

Every Alabama player seemed to radiate the same feelings of hesitant excitement and determined focus.

“It’s good we got us a win, but we still got one more to go so really ready to start working on the next game,” Robinson echoed. “…We’re just trying to reach our goal, make sure we keep working to reach that goal.”

Earlier this week, Henry described what accomplishing that goal would mean. He didn’t hesitate with his answer.

“Everything,” he said. “…It just means everything to us having a national championship.”