ARLINGTON, Texas — After Alabama’s overwhelming victory in the 80th annual Goodyear Cotton Bowl Classic, a tractor-trailer with a defining message sat parked in a corridor in AT&T Stadium just outside the Alabama locker room. The back doors were open, ready for loading for the trip to a championship stop. Its side was decorated with pictures of the Crimson Tide, and a phrase plastered in the middle of the collage:

For Alabama, the journey to this point in its season – headed to play in the College Football Playoff National Championship against the Clemson Tigers at Glendale, Arizona, in 10 days – hasn’t always included the efficiency of its Semifinal victory over Michigan State.

“Calvin Ridley had never played, Jake (Coker) had never played, and we had nine new starters on offense and Richard Mullaney, the third receiver from Oregon State,” Alabama offensive coordinator Lane Kiffin said. “So it was going to take time. 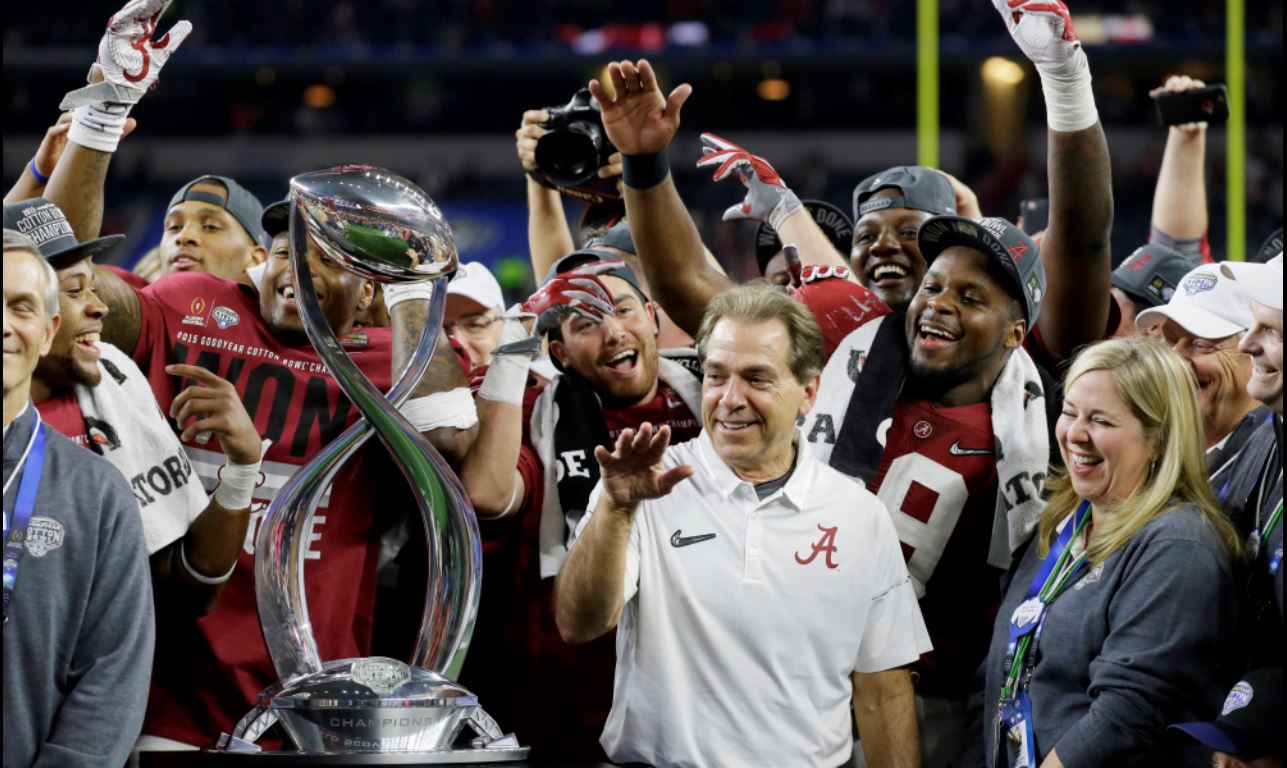 Alabama is a victory away from the validation that would extend a remarkable era of Crimson Tide football history. Alabama claims 15 national championships. But when Nick Saban took over the program in 2007, Alabama had won just once since the retirement and passing of Paul (Bear) Bryant after the 1982 season. That was the unexpected 1992 championship secured with a narrow escape against Florida in the first Southeastern Conference championship game and an upset victory over Miami in the 1993 Sugar Bowl.

If No. 2 Alabama should defeat top-ranked Clemson – in the 49th meeting of the two top-ranked teams since the introduction of the Associated Press poll in 1936 – the Tide would complete a fourth national title in a seven-year period. That possibility seemed remote – at best – after the 43-37 loss at home to the Ole Miss Rebels on Sept. 19.

But after that loss — the only one of the season — the Tide appeared to flip a switch, outscoring their opponents, 372-117.

“I’m just proud as hell of them for getting where they are and doing what they did all year long since Ole Miss,” Saban said.

One of the biggest developments since the defeat was the dramatic improvement and spirited leadership of Coker. Coker had been benched for the Ole Miss game, and he used that frustration to change the mindset around the team.

“I was really angry,” Coker said before the game, “but I wasn’t going to let that affect the team or let them know I was angry at all. When I got in there and got a chance to play, I made sure I put everything out there.”

Over his last 10 games, Coker has completed 73.1 percent of his passes for 1,703 yards and nine touchdowns.

“I think it’s just growing with these guys, getting more comfortable with everybody on the team,” Coker said. “… It’s been a learning process. I think we have gotten better as the season has gone on.” 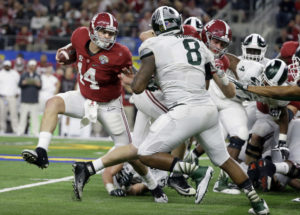 On Thursday night, Coker and his team showed just how far that process had come, scoring 38 points against a Spartans team that had allowed only 20.5 per game this season.

Alabama’s offensive development became crucial against Michigan State, as the Spartans showed some success in limiting a run game spearheaded by running back Derrick Henry. Before the Semifinal, the Heisman winner had averaged 152.8 rushing yards per game, an average of 5.9 yards per carry. The Spartans lowered his production significantly on Thursday, limiting him to 75 yards rushing, an average of 3.8 yards.On Thursday night, Coker and his team showed just how far that process had come, scoring 38 points against a Spartans team that had allowed only 20.5 per game this season.

“I think the way (the Spartans) play, and the way that they played us, that it was going to be difficult to run the ball,” Saban said. “So we knew Jake was going to have to throw it and do a good job of it. And he did a fantastic job of making some big plays.”

“Tonight he had to make plays because they were there, and he certainly made them,” Saban continued, “But, I think in each game that we’ve asked him to do that, he’s come through for us very nicely.”

Neither Saban nor Coker’s teammates seemed surprised by his success against Michigan State.

“I knew it was going to come down to the receivers and the quarterback connecting on big plays, because they were obviously going to try to stop Derrick (Henry),” said sophomore wide receiver ArDarius Stewart. “They did a good job stopping the run, but I knew on the outside, they couldn’t handle it, and (Coker was) excellent…

“We have a great quarterback, and he had a great game.”

Earlier this week, Coker reflected on his time at the helm of the Crimson Tide.

“It’s been a wild two years, really, coming in here,” he said at the stadium on Media Day on Dec. 29. “It’s a dream come true for me. I love playing at Alabama. I love everything about Alabama. So being able to do what I’m doing right now, playing for this team and this special group of guys, it’s real special.”

The final results of Alabama’s process will become clear on Jan. 11. Whether or not the Tide can take a national championship back to Tuscaloosa will determine just how special this team and this season have become.