A dream temporarily deferred: Managing injuries at the combine 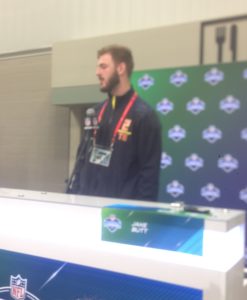 INDIANAPOLIS – Injuries often keep college football players off the field, but they can’t stop some hopefuls from making the trip to the National Football League scouting combine.

This may sound odd on its face. After all, the combine, famously nicknamed the ‘Underwear Olympics,’ is a platform for prospects to promote their physical fitness: their strength, their speed.

But of course the combine is more than the 40-yard dash and the bench press. It’s an all-around evaluation. Participants are thoroughly examined by medical professionals and team doctors. They meet and speak with scouts and coaches. It’s just as much a job interview as it is an exhibition of physique.

There’s still value in the process for players trying to recover from injuries before potential NFL careers can begin. For one, take Jake Butt. The senior Michigan tight end suffered a tear in the anterior cruciate ligament in his right knee during the second quarter of Michigan’s loss to Florida State in this past December’s Orange Bowl.

Butt had surgery on the knee on Jan. 10 and won’t be able to start running until April.

Rather than stay home, Butt is here and excited to be so. He’s not hiding his knee. He’s ready to brag about it to the doctors.

“It’s still been special,” Butt told a crowd of reporters on Friday. “For me, I was excited to do all this medical stuff because I’m so far along in my rehab. I’m ahead of schedule. I know where the average man would be at this point in time, and I know I’m ahead of that. So I’ve been really excited to show teams that.”

It’s simply cool to be here for players like Butt, who are one step closer to accomplishing an ultimate goal.

“This is something you dream about as a kid,” Butt said. “Just getting to be out here and recognized with some of the best players in the country. That’s just been really special.”

Butt was upbeat with reporters here, but his draft stock has unquestionably been affected by the injury. The Wolverine captain caught 46 passes for four touchdowns in his final college season and won the John Mackey Award, an annual honor given to the nation’s best tight end.  The once potential first-round pick is now projected to land somewhere in the third or fourth round.

Butt isn’t the only high-profile prospect dealing with injuries during this evaluation process.

John Ross, a highly-rated wide receiver from Washington, set a 40-yard dash record at the combine on Saturday, running it in 4.22 seconds, but did not participate in every drill due to an injured shoulder.

Malik Hooker, a safety from Ohio State, is here but unable to perform in any of the physical drills. Hooker underwent a core muscle surgery earlier this year but is still projected to be a top-ten pick.

One injured player with a more uncertain future participated in drills on Saturday despite recommendations that he should not.

Seth Russell, a quarterback from Baylor, is recovering from a dislocated ankle suffered in November in a game against Oklahoma. Russell told reporters on Friday that the ankle hasn’t totally healed. He pegged it at about 80 percent. On Saturday, Russell went through passing drills at the combine.

“I’ve been told several times, if you’re not 100 percent, don’t participate,” Russell said prior to Saturday’s workout. “It may not be pretty, but that’s part of it. That’s football. A lot of things aren’t going to be pretty. It’s about fighting through it and showing that I still have the ability to throw the football.”

While Butt, Ross and Hooker are expected to be draft choices, there’s no guarantee that Russell will be selected. Most projections have Russell slotted as a seventh-round pick or an undrafted free agent. Russell faced added pressure to prove himself and improve his prospects.

“I’m going to go out there to try my hardest and be my best just to show that I love this game,” Russell said. “I’m going to do whatever I can to get out on the field. I’m not a guy that likes watching. I want to be in there participating.”

Maybe Russell’s courage will pay off. Everyone here, whether healthy or dealing with a physical limitation, feels they have something to prove and something to gain.