An NCAA champion will be crowned on Monday as Villanova is set to square off against North Carolina.  The Tar Heels will be playing for the sixth national championship in their program’s storied history, while Villanova looks to earn its second title, and first since the historic 1985 champion Wildcats knocked off Georgetown. 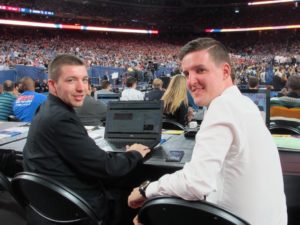 The championship runs of both programs have often crossed paths.  The two are set to meet for the seventh time in the NCAA Tournament, and four out of the six previous meetings have seen the winner go on to win the national championship.  In 1982, 2005 and 2009, North Carolina had to knock off Villanova en route to its national titles.  And before they ever pulled off the upset of Georgetown, the 1985 No. 8 seed Wildcats knocked off another highly regarded team in the Elite Eight, the No. 2 seed Tar Heels.

The matchup features what feels like the two truly best teams in college basketball. Stat-guru Ken Pomeroy would agree.  This game pits the KenPom No. 1 team (Villanova) against the No. 2 team (North Carolina).  The matchup marks the first time since 2008, when Kansas defeated Memphis, that No.1 has squared off against No. 2.

The key for North Carolina will be containing Ryan Arcidiacono, who has been outstanding through the entire tournament.  His stat line doesn’t look real upon first glance: 15.8 points per game, 66 percent shooting, 61 percent from three, 94 percent from the free throw line, and he even supports a two-to-one assist to turnover ratio.

The key for Villanova will be to continue its hot shooting as a team.  The team’s performance against Oklahoma on Saturday produced the second-highest shooting percentage in the history of the Final Four.  And if the Wildcats hope to cut down the nets, they will need to continue shooting the three at a high clip to offset the advantage Carolina holds in the post.

During the regular season of college basketball, it was a popular thought that there was no dominant team in college basketball. That was, until Villanova and North Carolina started thrashing every opponent that came their way in the NCAA Tournament.

If Villanova can find a way to repeat the dominance on both ends of the court that was on display against Oklahoma, there isn’t a college team in the country that could beat the Wildcats. They were simply unstoppable offensively and were as in-sync defensively as a team can be.

On the other side, North Carolina has also been a force of nature since the start of the ACC Tournament. The Tar Heels have beaten opponents by an average of 16.6 points per game since that point. They’ve won each of their five NCAA Tournament games by at least 14 points.

Both teams are deep, well-coached, and led by upperclassmen.

A few key aspects of the game will determine who gets their One Shining Moment at NRG Stadium.

The main matchup to watch is the battle between North Carolina’s Brice Johnson, a 6-10 senior forward, and Villanova’s Kris Jenkins, a 6-6 junior forward. Johnson has the height advantage and is one of college basketball’s most tenacious rebounders, averaging 10.5 rebounds per game. Jenkins, at 240 pounds, is 10 pounds heavier. Jenkins usually works around the perimeter, but Villanova will need for him to keep Johnson off the boards and out of the paint to win the title.

The shooting of North Carolina guard Marcus Paige will be another key in this matchup. Paige can be a streaky shooter for a team that sometimes lacks consistency in that area. If Paige is knocking down shots as he has in the tournament (47 percent from 3-point range in five games), the spacing he will create will allow the Tar Heels offense to operate at a high level. Villanova has thrived on blocking off the three-point line in the tournament so this is a key game within the game.