About Us Museum Studies Blog Blog Writing for the Indianapolis Zoo

Writing for the Indianapolis Zoo

Posted on April 20th, 2020 in Blog by Hannah Elizabeth Lundell 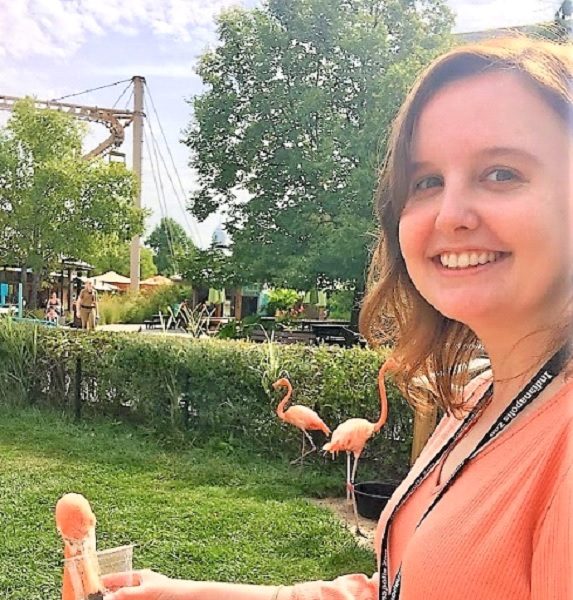 As an Evaluations and Exhibit Development Fellow at the Indianapolis Zoo, I do a lot of writing. I write signs for Zoo exhibits, materials for the Zoo magazine, and evaluation tools like surveys. The words I use are important to how guests perceive the Zoo’s animals. Often, when I’m tasked with writing about an animal, I gather all of the relevant information and then look at that animal for a while. I’m trying to look at it with a new perspective – from the guest’s point of view.

Sometimes, writing comes easily because I’m telling a straightforward story. For example, “Our two grey seals made their debut this summer! Ziggy and Scooter are brothers and arrived in May from the Brookfield Zoo in Chicago. Three-year-old Ziggy is very playful and loves to munch on things like Jell-O and ice. Scooter is a curious one-year-old learning from his older brother.”

I don’t think people often associate writing with evaluations. However, word choice is vital in surveys. Again, I try to see animals from the guest’s point of view when writing.

While developing the survey for the Zoo’s orangutan exhibit, I began with a list of 60 words that guests might use to describe orangutans. I observed the orangutans and how guests interacted with them to choose my words carefully. This list included words like “complex”, “playful”, and “solitary”, among others. I narrowed my list to 16 words, then asked guests to circle the 3 words they most associated with the Zoo’s orangutans. And even then, guests were ignoring my words and adding their own, such as “human-like” and “wild.” Clearly, I missed a few things while watching the orangutans.

All this to say that writing for the Zoo is complex. I have to put myself in the place of guests any time I am writing. I also have to choose words that tell that animal’s story because they can’t write it for themselves.

An Internship of Yes: Seizing Opportunities as a Graduate Intern
Posted on April 20th, 2020 in Blog, Featured