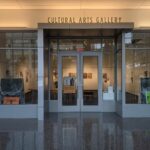 The Cultural Arts Gallery in the IUPUI Campus Center

The person at the neighboring sink kept throwing suspicious side eyes until they could no longer contain their question.

“I’m sorry, what in the world is that?!” they asked incredulously.

Emily Wilkes, curator of the Cultural Arts Gallery, and I were balancing a large glass jar under the faucet. As it filled, bits of wavy brunette wig hair and flecks of white clay floated to the top. Black ink spiraled into the suspension as we dipped a paintbrush into the mixture again and again, trying to achieve the desired effect.

I struggled to explain what looked like a grisly murder scene.

“Uhh… we’re working on an exhibit about Ray Bradbury and there’s this cool artifact we want to include but because the gallery doesn’t have security, we’re creating a replica.”

An insufficient explanation, but the person’s expression switched from horror to intrigue. 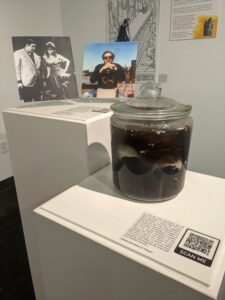 My first project for my internship at the Center for Ray Bradbury Studies was to curate an exhibit. I was given few guidelines, except:

1) it needed to be about Ray Bradbury, obviously,

2) it had to feature facsimiles of materials, not originals (read: lack of security), and

Oh, and though I started the internship at the end of August, the exhibit was scheduled to open at the beginning of October. No pressure.

I started where I thought was most obvious, determining what the exhibit would be about. Before my internship, I’d read only two works of Ray Bradbury, Fahrenheit 451 in high school and The Martian Chronicles between undergrad and grad school. I’d heard about one of Bradbury’s lesser-known short story collections, The October Country, but had never read it. The collection features some of Bradbury’s earlier explorations into dark fantasy and horror. I approached Jason Aukerman, the director of the Bradbury Center, and asked if the Center had ever done the annual exhibit on The October Country. They had not, despite the connection to the month of exhibition.

The rest of August and all of September was a whirlwind of exhibit design and preparation. I listened to The October Country on audio book on my commutes, consulted the former Center director, Jon Eller’s, trilogy of Bradbury biographies, and drafted an exhibit script. I treasure hunted for related materials in the largely unprocessed archive, searching for items that would tell a compelling tale about the work. When I’d selected materials to display, Emily and I carefully scanned them. I resized the scans and created interpretive text panels, made visually stunning with original watercolors by Emily. We sent the prepared materials to a printer on campus. When we received them back, we trimmed and mounted them on foam board ourselves to save money, a sweaty process undertaken outside because of the dizzying mounting spray fumes.

Finally, on October 2, we met in the gallery for install. Even though three of my Bradbury Center colleagues joined Emily and I, it took nearly eight hours to get everything arranged on the walls and pedestals. Jason created an epic time-lapse video of the process. We were exhausted but the result was rewarding, to see a little over a month of grueling work transformed into a multimedia storytelling experience.The exhibit was open throughout the month of October and received generous visitor feedback. A favorite was the replica jar and its murky contents we asked viewers to guess at, just like the characters in the Bradbury short story “The Jar.” One visitor saw a claw, 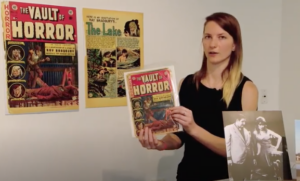 Sarah presenting during the virtual tour

Toward the end of the exhibit, I hosted a virtual tour including original materials that couldn’t be displayed, excerpts read aloud from the book, and a Q&A with Bradbury Center staff.

I also took classmates and family on behind-the-scenes tours of my creative process. I have never been so completely artistically fulfilled by a project. I hope lots of exhibit curating and designing is in my future–weird processes including tearing apart wigs more than welcome.