About Us Museum Studies Blog Blog The Storyteller, the Craftsperson

The Storyteller, the Craftsperson

“Sometimes you walk into a historic house museum looking for volunteer opportunities for college and then you spend the next three years playing the ghost of Jack the Ripper victim, Catherine Eddowes.” This is the beginning of the story I wrote to go along with the broken relationships and objects we came up with in our Week 1 activity. My object, a white nightgown that I wore as a costume, is simply a nightgown. However, when I tell the story of my short-lived acting career, it gives an added dimension. Benjamin Filene in “Things in Flux: Collecting in the Constructivist Museum,” discusses this idea. When we give stories to objects, we assign them value. They “connect us to a person,” and “invite recognition that an identical-looking (object) could contain other stories” (134).

This week’s Curatorial Practices class focused on “storytelling,” an important part of curating. 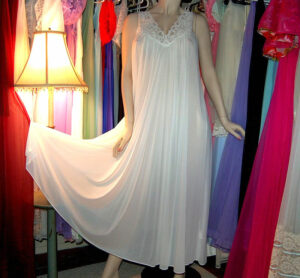 A nightgown similar to the one I wore as Jack the Ripper victim, Catherine Eddowes. Image Credit: Wikimedia Commons: White Soft Nightgown by Tranquil Gardens

The Museum of Broken Relationships is a collection of objects and their stories. To better understand what we are asking of people when we ask them to donate stories to the exhibit, we wrote stories for our own objects in class this week. In his essay,  “The Storyteller,” Walter Benjamin describes a storyteller as a craftsperson who uses the material of human life. When we ask people to donate their objects and their stories, we are asking them to create something by sharing snippets of their lives.

There are multiple layers of storytelling in our class project. The Museum of Broken Relationships collects almost all of the objects that are donated to them, but they then have to choose which ones to showcase and how to present them. They have to strike a balance between the more serious ones and the more light-hearted ones for example. he museum attempts to categorize objects into different themes when putting them on display, adding another level of meaning to them.

What makes a good story?  Larry Borowsky in “Telling a Story in 100 Words: Effective Label Copy” suggests a narrative arc and an attention-grabbing first sentence. We worked with partners after writing our stories to receive feedback on the elements of good storytelling that we could include. My partner and I focused on maintaining the reader’s attention and engagement while attempting to keep the tone of the story somewhat consistent before ending in a way that was narratively satisfying. To tie up my own story about my nightgown and my relationship with a historic house museum, I attempted to keep the more lighthearted tone I had begun with without diminishing the impact of the object and my relationship. I wrote, “It was a place of belonging in a community of mostly retirees, as well as a connection with an institution, and a building. Unfortunately, I graduated and moved out of state, so it’s hard to keep in contact with so many 80-year-olds, let alone a building.”

Peyton Reicherts is a second year MA student in the Museum Studies Program at IUPUI.