About Us Museum Studies Blog Blog BOOK REVIEW. Museums as Agents of Change: A Guide to Becoming a Changemaker.

BOOK REVIEW. Museums as Agents of Change: A Guide to Becoming a Changemaker.

Museums as Agents of Change: A Guide to Becoming a Changemaker, written by Mike Murawski. Lanham: Rowman & Littlefield, 2021.

Mike Murawski’s Museums as Agents of Change: A Guide to Becoming a Changemaker is about how museum 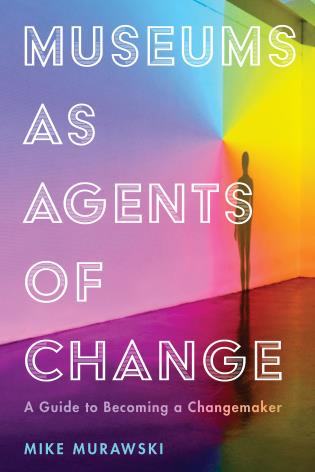 workers can become changemakers. Murawski has had many roles in the museum profession. Currently, he is a consultant but he has also worked as Co-Producer of Museums are Not Neutral. In his book, he argues that museums and their workers can create change in their communities, but significant effort needs to be made. Through the use of theories, current examples, and interviews with other museum professionals, Murawski supplies some ideas and strategies for everybody on how to become changemakers.

One major theme in Murawski’s book is cross-institutional change. It is the basis of many of his larger ideas. It begins in the first chapter where he introduces the idea of a human-centered museum. Murawski argues that there is no museum without the people working for it. He takes this idea further by discussing how change must happen in every part of the museum. However, he does highlight the specific role of museum leadership in chapter six since they often have more power to enact change.

Unlike many books focused on creating change, Mike Murawski includes three chapters which are about the well-being of the changemaker themselves. They focus on the importance of community between changemakers as well as self-care. They are an important break from the rest of the book focusing on the institution and communities because there is no change without changemakers themselves. Murawski himself writes that this chapter was written during the recovery of two back-to-back accidents after overworking himself making his words much more impactful. As well he brings up that many people suggest practicing self-care without really meaning anything, so he supplies specific strategies including practicing gratitude, and getting outdoors.

The last chapter is titled “Propelled by Love.” Murawski states that this chapter is perhaps the most important. In this chapter, he argues that love should be a core value of every institution. Love is a deeply human act and should be at the center of the work to change museums into places of connection and care. It is a hopeful way of ending his book with just a simple but important emotion.

Museums as Agents of Change is well-laid out and easy to read. It is a great book to use in a classroom because it is not necessary to read the whole book in order to understand it. His structure allows readers to easily refer back to sections and read the parts that speak to the reader the most. As well, it is simple and clearly stated. Murawski does not include too many examples and ideas that could overwhelm the reader. He includes five interviews with different museum professionals which helps to break up with ideas from more than just Murawski himself. Most importantly, he provides explicit ideas and strategies in how to enact the change he is writing about. These can often be seen as steps to take instead of vague theory with no real-world application. He suggests strategies such as speaking up and challenging others as well as developing community advisory groups and creating partnerships within the community by simply getting out into local communities and just being aware of what’s happening. It is helpful to have concrete examples of what can be done to create change at the end of every chapter. It makes his ideas feel more real and achievable instead of lofty beliefs that are difficult to act upon.

Mike Murawski’s Museums as Agents of Change: A Guide to Becoming a Changemaker is a book that has hope for the future. He proposes realistic ideas for the most part with evidence from current museum professionals succeeding in their work as changemakers. This book is important to the museum studies field because it has ideas that every museum professional can use. As well, it takes a more hopeful approach to change instead of focusing solely on the difficulties. The ideas that Murawski proposes are for everyone working in the museum because the more people becoming changemakers, the easier the transformation from ostensibly neutral institutions to human-centered, community-focused museums will be.

Peyton Reicherts is a first year MA student in the Museum Studies Program at IUPUI.