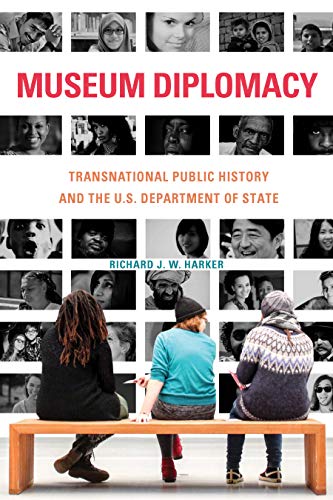 detailed critical analysis of the Museums Connect program. Museums Connect, founded in 2008, was a program designed in part by the U.S. Department of State and the American Alliance of Museums to facilitate partnerships between U.S. based museums and non-U.S. based museums to engage with local foreign communities and operate as a public diplomacy tool for the U.S. Department of State. Harker examines the history, ups and downs, and “practical and theoretical implications of transnational public history” (13) by using partnerships between United States museums and museums in Afghanistan, Morocco, and South Africa as case studies.

Harker begins in the Introduction by giving the reader a brief history of the changing nature of public history, from a U.S.-centric field to a field of growing international voices and perspectives. Harker continues by providing a look into history of how public history has been used for specifically for public diplomacy starting in 1980 with the creation of the International Partnership among Museums and a history of the evolution of the museum “from cabinets of curiosity to dialogic museums” (7).

In Chapter 1, Harker explores the history of American cultural diplomacy from the 1940s to the present day. In this exploration, Harker gives well known examples of this cultural diplomacy, such as the jazz tours during the Cold War. Harker points out, however, that many of these programs presented an idyllic version of the United States that was not always reflected at home. Harker go on to talk about the decline of cultural diplomacy during the fall of the Soviet Union and the renewal of these programs after the 9/11 terrorist attacks in the hopes of improving the United States image abroad and continuing to foster international sympathy over the attacks.

In Chapter 3, Harker writes about the partnership between the Ben M’sik Community Museum at the University Hassan II of Casablanca and Kennesaw State University’s Museum of History and Holocaust Education in Georgia. Harker examines this program’s struggles with avoiding intellectual imperialism and power dynamics between the United States and Moroccan students. However, despite these struggles the Moroccan participants were able to reflect “the BMCM’s particular public history tradition and community relationships” (88).

In the final chapter, Chapter 4, we read about the partnership between the Birmingham Civil Rights Institute and the Nelson Mandela House Museum and the Apartheid Museum. In this chapter, Harker examines the “shared histories” (99) of these two places, both being centers of the fight for civil rights and both being connected with great black figures and how that parallel history shaped their program.

In the Conclusion, Harker examines two different struggles of the Museums Connect program. One being the power dynamic between the U.S. participants and the non-U.S. participants, such as how “the U.S. museum professionals… assumed that the authority for history making, grant activities and decision-making was theirs to share rather than an inherently collaborative endeavor” (133). The other struggle of the program, the Harker provides, is its sustainability. All three projects were limited and could not continue long-term because of a lack of funding.

In conclusion, Harker’s Museum Diplomacy: Transnational Public History and the U.S. Department of State is an excellent read for any museum professional planning on collaborating internationally because of its showcase of the dangers of unbalanced power dynamics and controlling institutions.

John Terwilliger is a first year MA student in the Museum Studies Program at IUPUI.