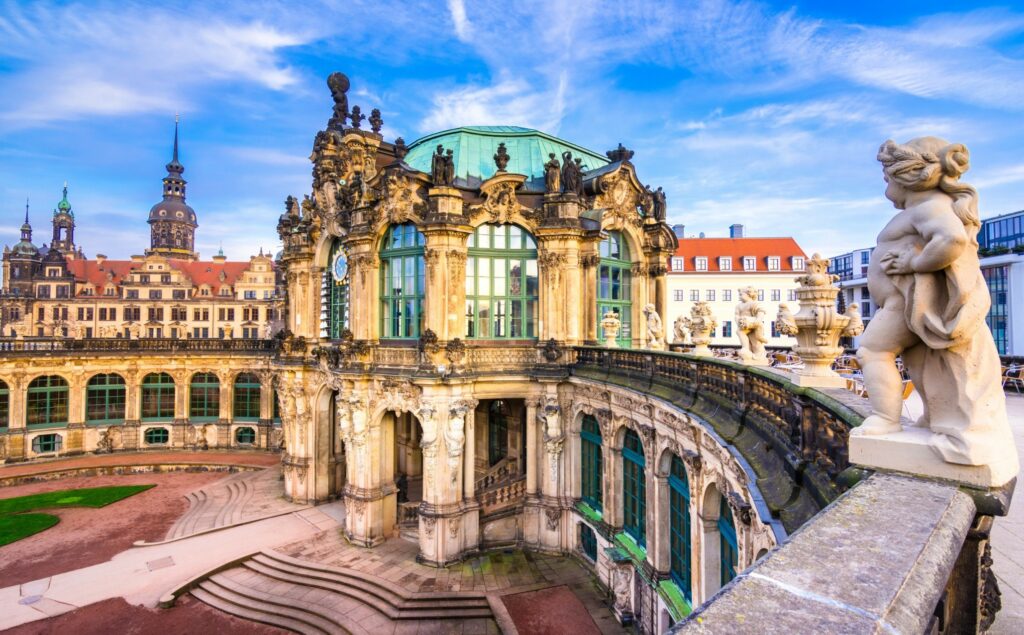 The Program in German offers a wide variety of courses ranging from language instruction at all levels to seminars on German literature, film, and media. German culture courses taught in English are also available for those who are not seeking a German degree.

GER-G 203: Intermediate German I (3 cr.) Intensive review of grammar. Further development of oral and written use of the language. Selections from contemporary German readings and media. (Prerequisite: G132, or equivalent or placement by testing)

GER-G 204: Intermediate German II (3 cr.) Review of grammar. Readings of modern German with stress on discussion in German. Writing of descriptive and expository prose. (Prerequisite: G203 or equivalent or placement by testing.)

Advanced German courses for the Major or Minor (taught in German)

GER-G 331: Business German I (3 cr.) Prerequisite: third-year language proficiency or consent of instructor. Emphasis on acquisition and use of business vocabulary, idiom, and style. Translating, reading, and writing skills are developed using constructions common to business German, as well as current materials (reports, journals) in the field.

GER-G 333: German Translation Practice (3 cr.) Prerequisite: third-year proficiency or consent of instructor. Introduction to the theory and practice of translation. Discussion of techniques and stylistic approaches. Emphasis on German/English translation using a variety of texts, including technical texts, business communication, and texts on current topics.

GER-G 365: Deutsche Kultur Heute (3 cr.) Prerequisite: third-year proficiency or consent of instructor. A critical investigation of contemporary culture in the German-speaking countries, including institutions and major personalities, customs, traditions, changing mentalities, and lifestyles as they compare with contemporary U.S. culture. Taught in German.

GER-G 371: Der deutsche Film (3 cr.) Prerequisite: third-year proficiency or equivalent. Survey of German cinema from the films of expressionism and the Weimar Republic through the Nazi period to the present. Emphasis on film as a form of narrative art and on the social and historical conditions of German film production.

GER-G 401: Deutsche Kultur in Amerika (3 cr.) Prerequisite: third-year proficiency or consent of instructor. Advanced undergraduate course. Its purposes are to provide an overview of the cultural heritage of German-Americans and to assist students in researching German heritage with a view toward developing research skills with original materials. The course is in a seminar format with students actively participating in discussions and presentations. Taught in German.

GER-G 407: Knights, God, and the Devil (3 cr.) The purpose of this course is to provide insight into the development of early German cultural life by reading and analyzing texts of the periods covered. Lecture materials cover historical and cultural background. Period texts are placed in contexts of other cultural phenomena, including art and music. As much reference as possible is made to the European context of the emerging German literacy language. Taught in German.

GER-G 408: Love, Nature, and the Age of Romanticism (3 cr.) Prerequisite: third-year proficiency or consent of instructor. Introduction to the cultural capital of courtly Germany, Weimar, and its relationship to German Romanticism, including readings and discussions of works by Goethe, Schiller, Kleist, Tieck, and the Grimm brothers. Literary examples are accompanied by pictorial, filmic, and musical illustrations. Taught in German.

GER-G 410: Language and Identity in Modern German Literature (3 cr.) Prerequisite: third-year proficiency or consent of instructor. Introduces students to major works of German literature from the turn of the twentieth century to the present. Topics include changing gender roles, the trauma of war and exile, globalization, migration, and the German idea of Heimat. Authors include Thomas Mann, Kafka, Seghers, Celan, Grass, Özdemir, and Erpenbeck. Taught in German.

GER-G 445: Oberstufe: Grammatik (3 cr.) Prerequisite: fourth-year proficiency or consent of instructor. Survey and practice of complex grammatical structures; systematic expansion of vocabulary. Discussion and writing based on current materials, such as newspapers, films, and radio programs.

GER-G 491 and G 492: Elementary German for Graduate Students I-II These courses are taught concurrently with G095-G096 and prepare students for the German reading proficiency exam.

GER-G 265 German Culture in English Translation (3 cr.) A survey of the cultural history of German-speaking countries, as well as of contemporary civilization, with an emphasis on individual aspects of culture traced through several epochs.

GER-E 370 German Cinema (3 cr.) No knowledge of German required. Survey of German cinema from the films of expressionism and the Weimar Republic through the Nazi period to the present. Emphasis on film as a form of narrative art and on the social and historical conditions of German film production. Offered in English concurrently with G371. No credit given towards German major.

GER-G 381: German Literature to 1750 in English Translation (3 cr.) No knowledge of German required. Major works and writers of German literature in the medieval, Reformation, Renaissance, and Baroque periods. Offered in English.

GER-G 382: Classicism and Romanticism in English Translation (3 cr.) No knowledge of German required. Major works and writers of German literature, 1750-1830, to include the periods of the Enlightenment, Storm and Stress, Classicism, and Romanticism; representative writers such as Schiller, Goethe, Kleist, and the Grimm brothers. Offered in English.

GER-G 383: Nineteenth-Century German Literature in English Translation (3 cr.) No knowledge of German required. Works and writers of German literature, 1830-1900. Analysis of such concepts as realism, naturalism, and neoromanticism, their theories and styles; exemplary writers such as Buechner, Heine, Nietzsche, Hauptmann, and others. Offered in English.

GER-G 384: Twentieth-Century German Literature in English Translation (3 cr.) No knowledge of German required. Major works and writers of German literature from the turn of the twentieth century to the present, with emphasis on Rilke, Thomas Mann, Kafka, and Brecht. Offered in English.

GER-G 391: German Colloquium in English Translation II (3 cr.) No knowledge of German required. May be taken as an elective by other students. Emphasis on one topic, author, or genre in German literature, or other aspect of German culture. No credit given toward German major.

For specific courses offered in a specific semester see the Schedule of Classes at Student Central.

Contact Thorsten Carstensen, Director of the Program in German.