About Us Scroll and Tablet Blog Epics Real Housewives of Mt Olympus Josephus and Juvenile Judaism? 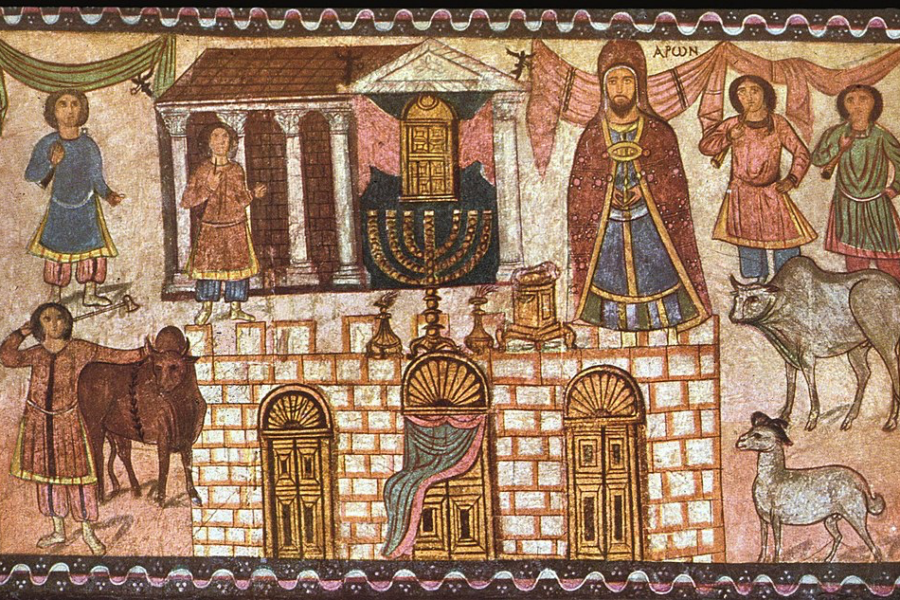 Having constructed and outfitted a temple, changed into his priestly robe, and assembled the community with sacrificial victims, Aaron waited patiently for someone to invent Judaism.

Episode 46: In which Herodotus and Josephus debate what constitutes the essence of Judaism, mikvahs or monotheism.

This episode of Real Housewives of Hades (a Mt. Olympus spin-off) brought to you by the latest archaeological news on SmithsonianMagazine.com – and by CLAS-C 102 Ancient Roman Culture.

HERODOTUS, GREEK HISTORIAN AND BELIEVER IN TALKING DEER: Hey Josephus! I just heard that your religion got demoted.

JOSEPHUS, JEWISH HISTORIAN AND BELIEVER IN NOT BEING SLAUGHTERED BY ROMANS: I have no idea what that means.

HERODOTUS: There’s some mortal scholars saying the Jewish religion isn’t one of the oldest in the world. They’re saying it only dates to about 100, maybe 200 years before that Jesus fellow.

JOSEPHUS: That’s quite the revision. What in the world could their evidence be for that? 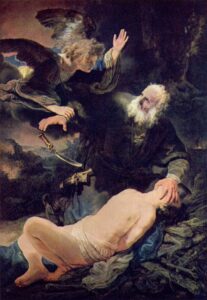 HERODOTUS: (consulting scroll) Well, it says first that you use special bathtubs. And that most of those that have been found date to about that period. Like, way later than that special instruction book you love.

JOSEPHUS: Are you talking about a mikvah? And the Bible?

JOSEPHUS: But it’s perfectly possible to bathe ritually without a mikvah. The issue is the source of the water, not whether it ever gets into a particular bathtub. And mikvahs are super expensive installations. Only the rich would ever be able to afford one. So all you’re tracing is when rich people started building special water features, not the history of ritual purification.

HERODOTUS: But can you say the same thing about those fancy chalk vessels your people like to use to keep out spiritual impurities? Those also show up at about the same time as the bathtubs.

JOSEPHUS: Um, yes, I can say that exact same thing. Chalk vessels are also expensive and special purpose. I feel like what we’re really tracking here is the strength of the Judaean economy. 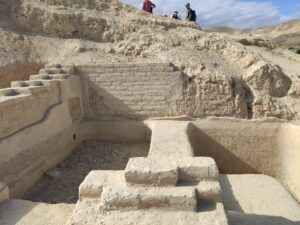 Before you had Shark Tank, you had ritual purification tanks.

HERODOTUS: Well, what about coins? It says here that coins minted in Judaea had pictures on them, and apparently that Bible you were talking about forbids pictures of things?

JOSEPHUS: Um, that’s not a theologically sophisticated understanding, but sure, let’s go with that for a moment. Regardless, having pictures of things is just what coins looked like in the ancient world. You needed to have coins that looked appealing all across the Mediterranean and beyond, because that’s how widely coins circulated. Currencies weren’t restricted to a particular territory. If Judaean coins looked weird to people, that could be a major fiscal problem. Were the coins even minted by Jewish authorities?

HERODOTUS: Actually, it does not say. But there were also pictures of things on things in Jerusalem! Ha! Got you there.

JOSEPHUS: There were pictures of things on other things in a large, multicultural, metropolitan city? I’m not sure that’s evidence of anything at all.

HERODOTUS: That’s a decent point. But there’s not a lot of evidence for people keeping the Sabbath, whatever that is! It says so right here.

JOSEPHUS: The Sabbath is a day of rest when people don’t do things. Now we’re looking for evidence of people avoiding certain actions on particular days, thousands of years ago?

HERODOTUS: They have that! I think? It says here in some book of the Bible the author complains that the Judeans are ignoring religious leaders’ instructions about various customs. Which shows that people didn’t know about the customs. Wait, that doesn’t make any sense. You can’t ignore something you haven’t heard about. 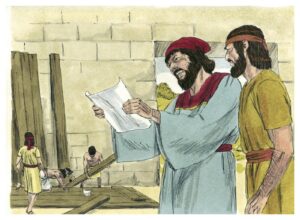 Looks like the union came through for us after all. Stop your slavin’, boys! We’ve invented the Sabbath!

JOSEPHUS: What does the article say about believing in “the One True God”?

HERODOTUS: I have no idea what that means. It doesn’t seem to be mentioned here, at least not extensively. What’s a One True God?

JOSEPHUS: It’s the major tenant of Jewish religion. It’s what sets us apart. We believe there is only one god, who stands outside the universe and created all that is in it. We are his special chosen people.

HERODOTUS: Wait, you believe what? I don’t know what sounds crazier, that there is only one god or that that god likes humans. Everyone knows the universe is run by a bunch of bickering sociopaths who do things like start major wars just to earn a piece of fruit. We may not be able to agree on which bickering sociopaths, but everyone agrees there’s a lot of them. Too many to keep track of, actually. That’s why when we meet new people who have new gods we tend to adopt those gods, just in case we’ve missed one.

JOSEPHUS: That’s a good point. Judaism does pass the Roman sniff test. By the time the Romans started interfering in our area, they already had the idea that the Jewish religion was super, super old. That’s why they tolerated our odd branch of monotheism, rather than forcing us to sacrifice to the Roman gods. They were worried we Jews might be on to something, since we’d clearly existed for a long time without being smote from the earth by one of your raging nut-jobs of divinities.

HERODOTUS: Right, but for that to be really convincing you’d need an example where they didn’t extend that same curtesy to another younger monotheistic religion, and where are you going to find another one of those in the ancient world?

JOSEPHUS: I think that’s what happened with Christianity. Once the Romans were already in Judea, some people decided that a carpenter was the manifestation of the Jewish god. Romans were not having people inventing religions on their watch. And Romans are scary when they’re mad. I should know. 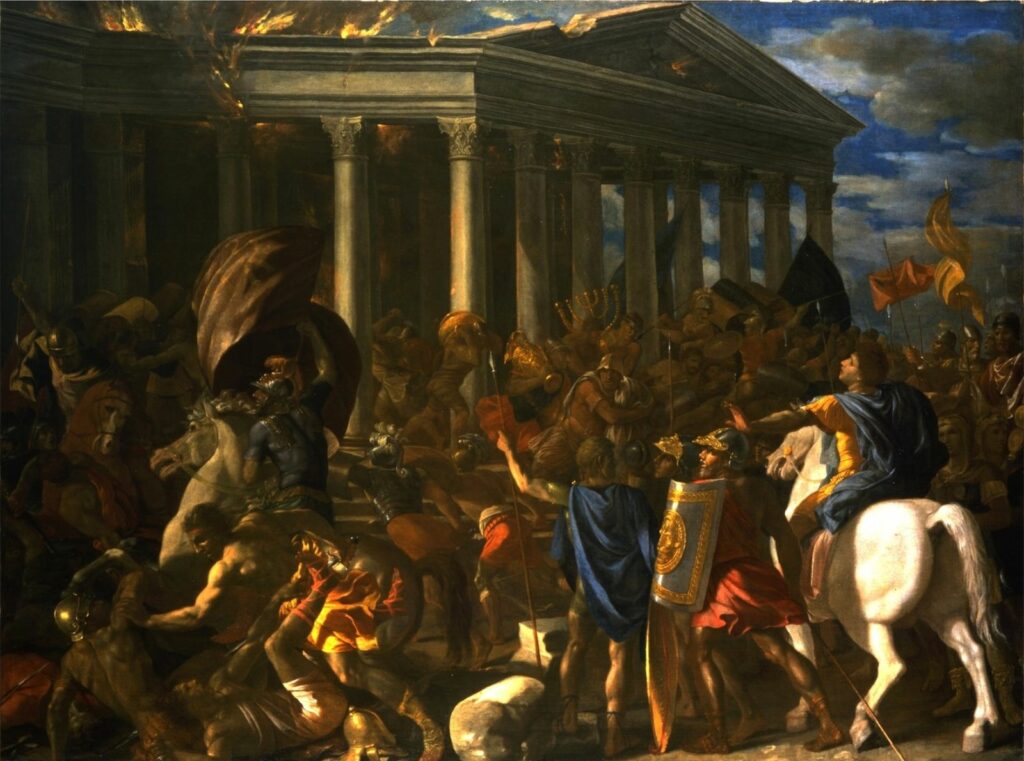 The Roman Empire was the Incredible Hulk of the ancient world, if Bruce Banner only made the occasional cameo appearance and was obsessed with aqueducts.

HERODOTUS: Well, I gotta say, I’m not convinced by this mortal news and its evidence, and I’m the one who invented the idea of historical sources.

JOSEPHUS: Yeah, I feel like “I can’t afford a mikvah” is a far cry from “I don’t believe in a monotheistic god that will continue to be the pillar of the Jewish faith for thousands of years.”

HERODOTUS: Well, I wouldn’t worry about it. It’s not like there could still be any real controversy about the legitimacy of the Jewish faith, not thousands of years later. 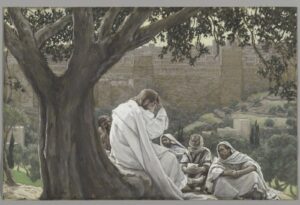 I can’t believe we’re still dealing with this sort of thing.

To learn more about how Romans interacted with—and were surprisingly “tolerant” of—other religions (profoundly disinterested might be a better word), enroll in CLAS-C 102 Ancient Roman Culture, coming up Spring 2023, and earn GEC credits while you’re at it! Or to explore how archaeologists reconstruct ancient identity (or at least think they do), enroll in CLAS-A 301 Classical Archaeology, coming next Fall 2024, no pre-reqs or previous experience required. Can’t get enough of Ancient Greece and Rome? Earn a Classics Minor in just 15 credits!