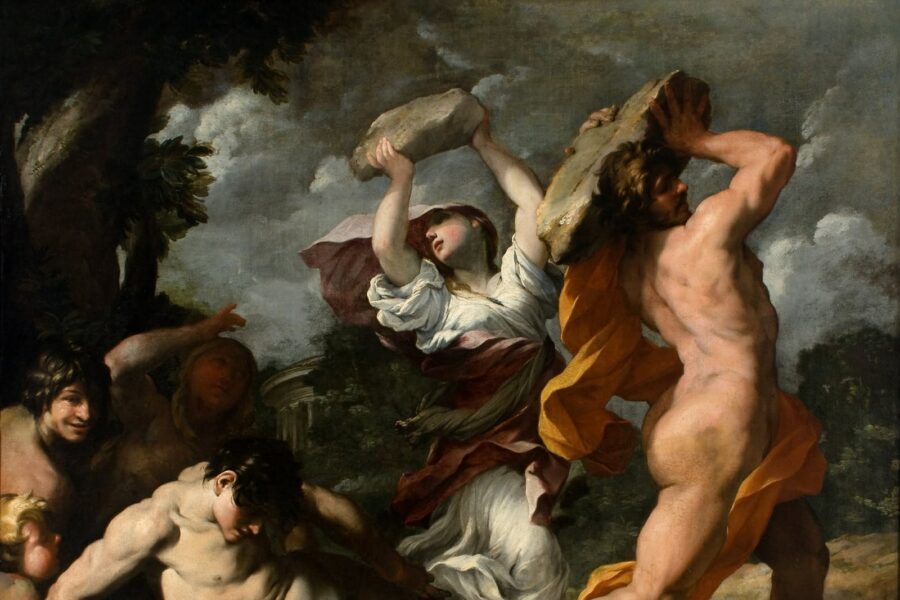 Meeting 8: In which the Muses learn that Sweeney Todd ain’t got nothing on Greece when it comes to cannibalistic cooking, and Homer writes a werewolf.

This episode of Mythology Pitch Meetings brought to you by CLAS-C 205 Classical Mythology.

This episode of Mythology Pitch Meetings brought to you by CLAS C205 Classical Mythology.

HOMER, UNCONTESTED G.O.A.T OF ANCIENT POETRY: Do I! I thought I’d try my hand at the “that time a flood wiped out humanity” genre.

HOMER: So, it all starts with this king called Lycaon, who wants to determine whether or not the gods are omniscient.

CALLIOPE: Are the gods omniscient?

HOMER: Um, I mean…aren’t you a goddess?

CALLIOPE: Oh right. Mystery solved, then. Are the gods going to be omniscient in your stories? 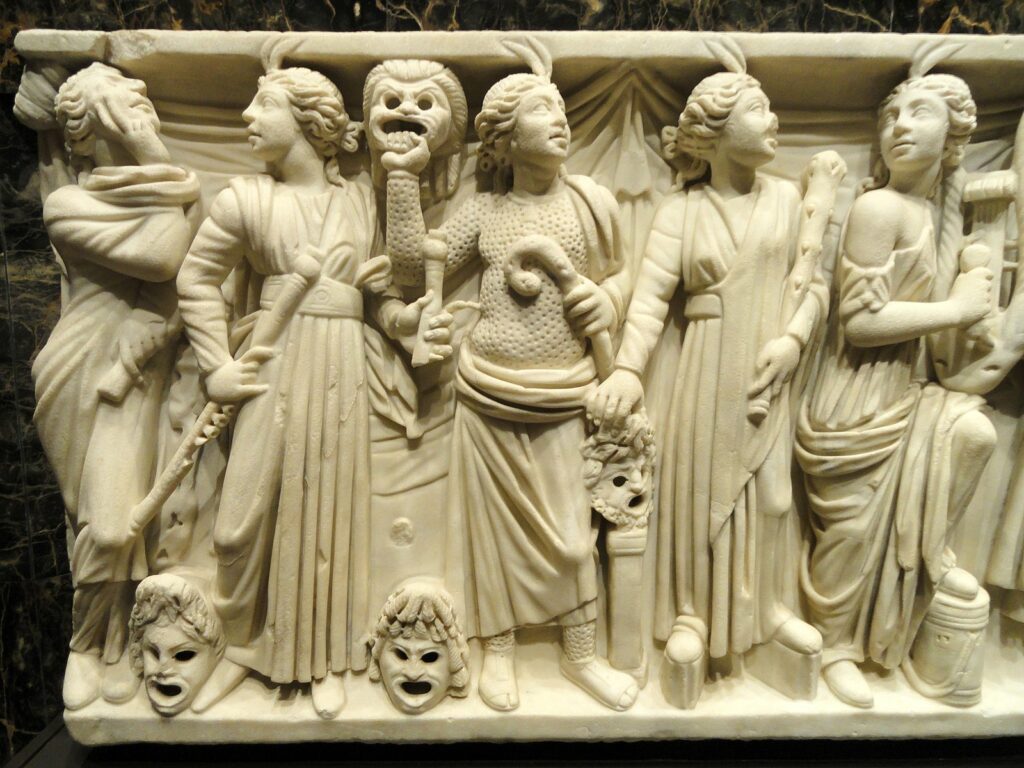 Does anyone know if we know everything?

HOMER: Actually, I would prefer if they could be just as omniscient as I need them to be for the plot.

CALLIOPE: That sounds confusing, but what do I know? Speaking of figuring things out, it’s going to be difficult for Lycaeon to come up with a way to determine the gods’ omniscience.

HOMER: Actually, it’s going to be super easy, barely an inconvenience. He decides to murder his son, bake him into a pie, and serve him to Zeus for dinner, to see if the gods will notice. Because the gods hate kin-murder, and human sacrifice, except for in those cases where they will demand either or both.

CALLIOPE: And we’re off to a deeply weird start, once again. Aren’t people going to be put off by the whole eating-children thing?

CLIO, MUSE OF HISTORY (interrupting): Actually, cooking children into pies and feeding them to their parents will be a surprisingly frequent element in Greek mythology. Shakespeare will borrow the idea, as will Game of Thrones. Scholars will speculate that it symbolizes the ultimate breakdown of the Greek household, more specifically how it can destroy itself from within if it expands past the limits of its resources (glares at 2022 Supreme Court). Or it could be it’s just super gross and people love super gross things.

HOMER: Anyway, Zeus definitely does realize he’s been served off the children’s menu, and he becomes so pissed he decides to wipe out all of humanity.

CALLIOPE: Just because of one man’s wickedness?

HOMER: Once again, one man’s error versus all of humanity’s destruction is not a distinction gods really are capable of making. So Zeus decides to send a flood and kill everyone. But Prometheus doesn’t want his son Deucalion to die, or Deucalion’s wife Pyrrha, because he wants to brag to the other Titans about his grandkids someday. So he puts the two of them on a boat, and they survive the flood. 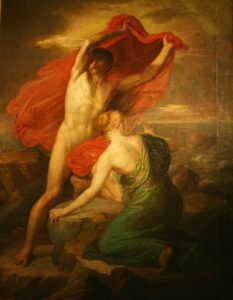 Even Deucalion and Pyrrha had to admit, they would have preferred an ark right about now.

CLIO: So only two people are supposed to repopulate the entire earth?

HOMER: No, don’t be ridiculous. Even I know that would lead to terrible inbreeding.

CLIO: I just asked because other versions of this story will not make that connection.

HOMER: When they disembark, Deucalion and Pyrrha head to the Python, who is this monstrous snake prophet thing that lives under a rock at Delphi and can tell the future in riddles. It’s the early version of that oracle we talked about.

CALLIOPE: And oddly enough, the version that makes more sense.

HOMER: The Python tells them they need to take the bones of their mother and throw the bones over their shoulder to repopulate the earth. And Pyrrha is like “No way, I’m not desecrating my mother’s body like that.”

CALLIOPE: She’s willing to let the human race die out rather than be rude to her mother’s corpse?

CLIO: To be fair, taking care of living and dead bodies is really the only thing of consequence that Greek women will be allowed to do. And Pyrrha’s running pretty low on living bodies, so…

HOMER: But Deucalion realizes that the Python’s answer is a riddle, and that their real mother is the earth itself, and her bones are rocks. So the two of them walk around throwing rocks over their shoulders, and when the rocks hit the ground, they become people. And thus humanity is saved. 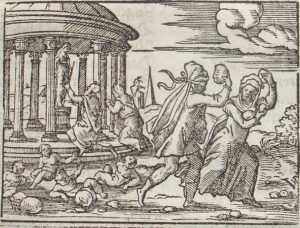 I don’t care if it’s blurry, this picture is hilarious. #WorthIt.

CALLIOPE: How many rocks do Deucalion and Pyrrha have to throw to make this work?

HOMER: Um, a lot I guess? I wouldn’t worry about it, Greece is full of rocks.

CALLIOPE: I was more thinking that it would be a major project for them to throw thousands upon thousands of rocks over their shoulders. You know, to get enough people to avoid inbreeding.

HOMER: I suppose that’s just what they do for the rest of their lives. Which is kind of horrific, now that I think about it…

CALLIOPE: Speaking of horrific, what happens to that Lycaon fellow who started this whole mess in the first place?

HOMER: Oh don’t worry, Zeus really gets him good. He turns Lycaon into a wolf and kills all his remaining children. 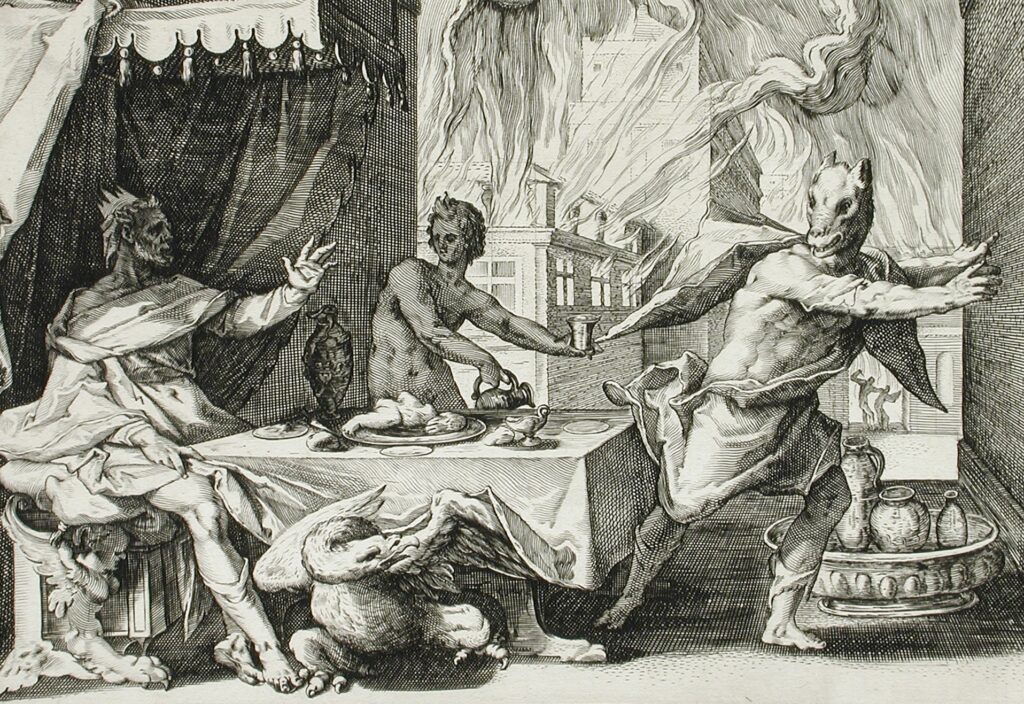 CALLIOPE: So, to punish a man in large part for killing his own kid, Zeus…finishes the job by killing all his other kids?

HOMER: And the wolf thing!

CALLIOPE: Also, isn’t Zeus just going to kill all of them anyway with the flood?

HOMER: I suppose, but I really wanted a scene where Zeus uses lighting to kill a bunch of innocent bystanders while the real culprit turns into a wolf. It’ll look really metal. What do you think?

CALLIOPE: I think there’s no reason those bystanders have to be children. Maybe they could just be innocent peasants? No one will care about them.

HOMER: What if I make it so Lycaon has 50 sons, so most of them are grown-up already? And we can throw in Lycaon’s anonymous subjects for more lightning-fodder.

CALLIOPE: Well in that case, I think the whole story sounds great. It’s got danger, riddles, and kid cupcakes, which apparently is what the people want. But what happens with all the earth’s animals when the flood comes?

HOMER: I mean, I can’t imagine anyone will really care about that detail.

For more examples of Ancient Greece putting their own weird spin on stories found in other cultures, and how those myths shaped Ancient Greek and modern societies, enroll in CLAS-C 205 Classical Mythology, coming up as a late-start class in Fall 2022, and earn GEC credits while you’re at it! Or to learn more about how ancient people understood natural disasters, enroll in our 1-credit “appetizer” course CLAS B312 Plagues, Disaster and Death in the Ancient World, coming up in the first-third of Spring 2023 with no pre-reqs! Can’t get enough of Ancient Greece and Rome? Earn a Classics Minor in just 15 credits!