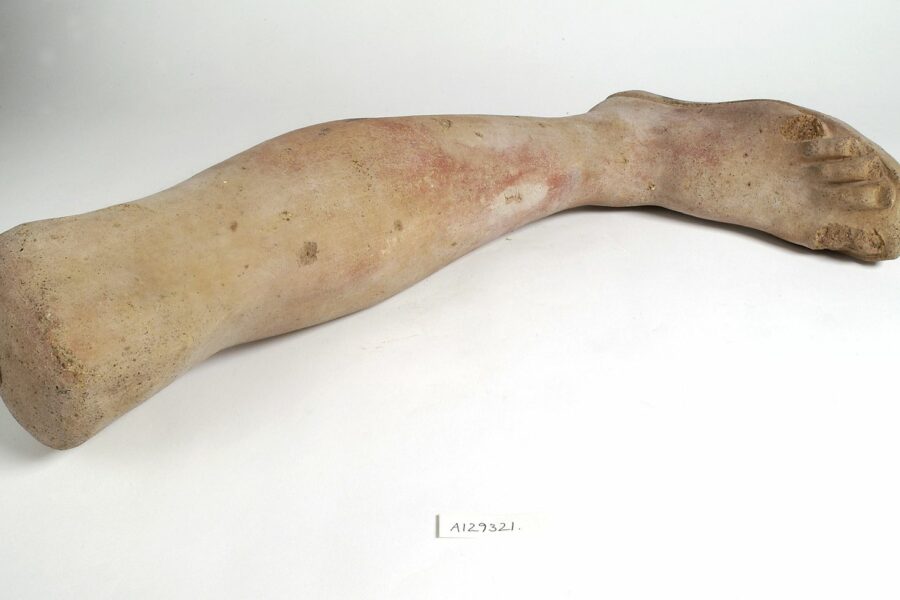 Episode 31: In which Hippocrates has a crisis of identity and conscience, and Aristotle argues they can make Greece great again.

This episode of Real Housewives of Hades (a Mt. Olympus spin-off) brought to you by CLAS-C 210 Ancient Medicine and Modern Terminology.

ARISTOTLE, ANCIENT PHILOSOPHER AND SCIENCE NERD: Hippocrates, you seem upset. What’s wrong? Besides being dead in the bleak underworld for all eternity, of course.

HIPPOCRATES, ANCIENT PHYSICIAN AND FATHER OF MEDICINE: I just heard that mortals have discovered evidence for the earliest successful amputation. It’s in Borneo. From 31,000 years ago!

ARISTOTLE: What’s the big deal? So some random mortal got lucky and didn’t kill someone when he chopped a limb off. I don’t see why you’re all shook about it.

HIPPOCRATES: Because I’m Hippoocrates! Mortal doctors swear an oath named after me! I established the major principles of modern Western medicine! I’m supposed to be the best, the pinnacle, the apogee of ancient medicinal accomplishments! 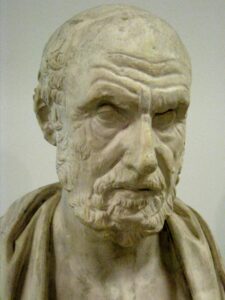 This guy looks like he has a great bedside manner.

ARISTOTLE: And you are, because we Greeks are the best at everything. I’m still not seeing the problem here.

HIPPOCRATES: There’s no way I could do that sort of operation. That Borneo doctor? To make happen what they made happen, they would first have to purposefully sever the limb, and the gross bits around it, of a child, by the way. Then they would have to make sure the kid didn’t bleed out or go into fatal shock. In Ancient Greece we couldn’t prevent that from happening all the time to postpartum mothers, and women have babies constantly!

ARISTOTLE: Well, that’s an entirely different situation. If a woman’s uterus would stay put properly, instead of wandering around her body like a parasitic animal, then it would be easier to stop the bleeding.

HIPPOCRATES: You know that’s not scientifically correct, right? You have to know that by now.

ARISTOTLE: I will know exactly as much about female anatomy as I choose, thank you very much.

HIPPOCRATES: Then there’s the post-operative recovery. The risk of infection. The round-the-sundial care. Then they raised the child to adulthood! The family didn’t just abandon the kid because of physical challenges.

ARISTOTLE: If you’re talking about our practice of abandoning children in the woods, it’s survival of the fittest. The real great ones get raised by predatory animals. 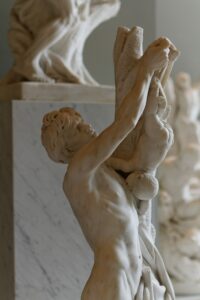 Oedipus, a story where “a naked man rescuing an upside-down infant hanging from a tree” isn’t even close to the weirdest incident one could choose to illustrate.

HIPPOCRATES: I mean, again, you have to know that’s not scientifically correct, right? The medicinal and social accomplishments of this Borneo thing are astounding, and meanwhile we’re chucking babies into woods and hoping for the best. It boggles the mind.

ARISTOTLE: Well, maybe it boggles your mind. My mind is unrivaled, certainly by some farmer quack.

HIPPOCRATES: Farmer? This pre-dates farming. By millennia! This was a hunter-gatherer society! The implications of this Borneo thing about the development of human knowledge are immense. What other great minds have gone unsung across the ages just because writing didn’t record their deeds? I have no right to call myself the greatest of all time.

ARISTOTLE: Pull yourself together, man! You are the greatest because people say you are the greatest. Look at me. I’m heralded as one of the greatest scientific philosophers of all time, and I thought the moon was a sentient being motivated by its deep love of shapes. My most famous student is called Alexander the Great, and all he did was slaughter and sleep his way around Western Asia and Egypt, upending and devastating perfectly functional societies, before drinking himself to death at the age of 32, like some ancient John Belushi. Greatness is a popularity contest. 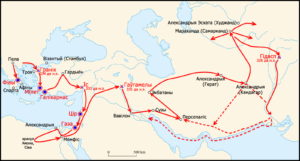 Even in Belarusian(?!), it’s obvious this is not a well thought-out campaign plan.

HIPPOCRATES: I don’t think that’s a sound principle for social organization. You’re kind of making my point for me here.

ARISTOTLE: Whatever. Speaking of social organization and great men, I’m going to go hang out with Plato. He understands what I mean when I say you are great because others think you are. He wrote a bunch of fanfic about Socrates, and now people think both of them were great philosophers, despite having little independent evidence of anything Socrates said.

HIPPOCRATES: I’m beginning to think maybe I should have moved to Borneo.

For more ancient medicinal practices, and how they shaped modern medicine, enroll in CLAS-C 210 Ancient Medicine and Modern Terminology, coming up Spring 2023! Or for more interesting ancient theories on how women’s bodies work, enroll in our 1-credit “appetizer” course CLAS-B 313 Extraordinary Ancient Women with no pre-reqs, still available Fall 2022 as a late-start class! Can’t get enough of Ancient Greece and Rome? Earn a Classics Minor in just 15 credits!