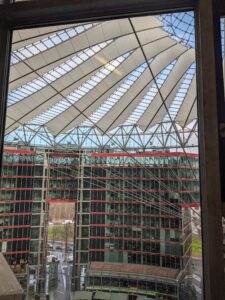 A view to the interior of Potsdamer Platz’s Sony Center from the Deutsche Kinemathek’s Schriftgutarchiv.

This spring, Dr. Nichole Neuman, Assistant Professor of German, is spending five weeks in Germany, conducting research on itinerancy in German cinema. As a film historian, her work not only involves watching and analyzing films, but looking at extrafilmic materials (like ‘Hausprogramme’ of cinemas, production companies’ marketing materials, or the films’ screenplays) in archives and researching the socio-political contexts of contemporary society when the films were made and released.

Since a large number of films are not available in the United States, with some even only being available on 35mm or 16mm, film archives play a necessary role in Dr. Neuman’s research. She is spending time at the Deutsche Kinemathek in Berlin, which also houses a museum, a Mediathek, a library, and a vast archive of films, costumes, photographs, documents, and more; the Murnau-Stiftung in Wiesbaden, named for the well-known Weimar director, Friedrich Wilhelm Murnau (Nosferatu, Der letzte Mann, Faust); and the Deutsches Filminstitut + Filmmuseum in Frankfurt am Main. She also is researching German laws and histories relating to itinerant and unhoused populations at the Staatsbibliothek in Berlin (as seen in Der Himmel über Berlin). If you want to talk about film history and Cinema Studies, reach out to her!