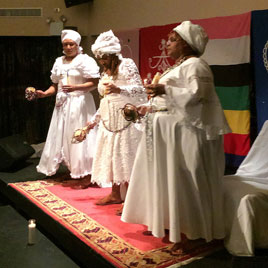 An IUPUI professor is part of a new project aimed at amplifying and strengthening efforts to prevent violence and discrimination against Africana religious practitioners, including those in Indianapolis.

Edward E. Curtis IV, the William M. and Gail M. Plater Chair of Liberal Arts and professor of religious studies in the IU School of Liberal Arts at IUPUI, Danielle Boaz of the University of North Carolina at Charlotte and Youssef Carter of the University of North Carolina at Chapel Hill were awarded $250,000 by the Religion and Theology Program of the Henry Luce Foundation to advance public knowledge about race, justice and religion in America.